Synopsis: In the dark heart of a sprawling, anonymous city, Terminal follows the twisting tales of two assassins carrying out a sinister mission, a teacher battling a fatal illness, an enigmatic janitor and a curious waitress leading a dangerous double life. Murderous consequences unravel in the dead of night as their lives all intertwine at the hands of a mysterious criminal mastermind hell-bent on revenge.

If you’re curious about ‘Terminal’, it’s probably because of its name cast, which includes the likes of Margot Robbie, Simon Pegg and even Austin Powers… we mean, Mike Myers. But just why such a group of talented actors would lend their time to this interminably boring and utterly pointless movie is beyond comprehension, even more so for Robbie who is among one of its four producers. Oh yes, writer-director Vaughn Stein’s filmmaking debut is a ‘Sin City’ inspired neo-noir infused with a kaleidoscope of neon colours but with all the substance drained out, so unless it’s a one-and-a-half hour of candied pastiche you’re after, you needn’t even bother.

Notwithstanding, for those keen to know more, here’s our attempt at trying to wring coherence out of it. Told through a tortured timeline, the disjointed narrative is made up of three intertwining storylines: first, that of a contract killer named Bonnie (Robbie) who aims to prove herself as a hitman to a mysterious employer by pitting two assassins (Dexter Fletcher and Max Irons) against each other; second, that of diner waitress Annie (also Robbie) who crosses paths with a dying English professor named Bill (Pegg) at the titular restaurant; and third, of a limping janitor (Myers) who shuffles along the vast, depopulated railway station which all the other characters inhabit seemingly going about his own business, but clearly bearing some larger connection to every single one of them.

It will take a little more than an hour before Stein stitches these series of playlets together, but what a terrible hour it is. There’s Fletcher and Irons’ pair of hitmen trading hard-boiled dialogue that tries to sound cool and gritty at the same time, but is really only corny and cringe-worthy. There’s Robbie delivering her dialogue with a snarl that tries to be intimidating and erotic at the same time, but just feels unnecessarily over-the-top. There’s Robbie again challenging Pegg about death, freedom from it and the “pathetic fallacy” that comes off sounding more and more like intellectual psychobabble for the sake of it than anything else. And last but not least, there’s Myers trying to make sense of his role that ends up like a diminutive Dr Evil. Alas, there is hardly any reason to care for any of these characters, not least because they are caricatures that inhabit some artificial underworld that makes no sense, and don’t even get us started about how badly written the lines are.

To his credit, Stein tries to build momentum towards an off-the-rails ending in the third act, but as ballsy as it is, it is equally ridiculous - and considering how underwhelming the earlier acts were, just simply unsatisfying. Oh yes, it’s no surprise that these characters are somehow all connected to one another (including Bonnie and her alter-ego Annie) but to sit through one hour of flashy, hyper-stylised nonsense to get to that point is hardly worth it. There is some strength in its stylistic combination of a neo-noir palette with the Day-Glo colours from ‘Alice in Wonderland’, but the Crayola noir itself is hardly enough to keep one engaged for a full hour.

‘Terminal’ suffers from a classic case of style over substance, or in this case, all style and no substance. There is nothing human, credible or real in its tired tale of deceit, double crosses and narrative switchbacks, so why Robbie, Pegg and/or Myers even bothered is terminally incomprehensible, just like much of the movie is. Its alternate title is ‘End of the Line’, and that’s a pretty apt description for Stein’s filmmaking career if he doesn’t prove that he has more to put on screen than a neon-coloured cartoon.

(All style and no substance, this neon-lit ‘Sin City’ inspired neo-noir is interminably boring) 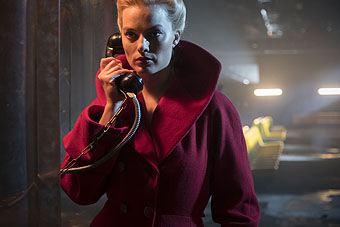 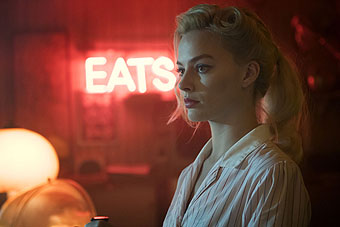