To enjoy the Coen brothers’ latest movie, Hail Caesar, properly, one has to remember that this movie is intended to be a madcap goofy comedy milking it for laughs with gags.

The plot itself is aimless and the characters aren’t exactly strong. In fact, they border on being stereotypes and would have fallen flat as two-dimensional characters even if it wasn’t for the amazing cast.

Kudos to the Coen brothers for casting the actors, particularly George Clooney and Ralph Fiennes, in roles that they are not typically known for. The courage of these two actors to play against type is a delight for the scenes that feature them are comedy gold. George Clooney ditches his cool debonair image and is an utterly believable as a clueless Hollywood himbo whose flummoxed vanity brings on the laughs. He believably shrivels and whines as Josh Brolin’s Eddie Mannix, the Hollywood fixer, slaps him making you forgot this is the George Clooney who rather coolly saunter into a casino to rob it of its cash as Danny Ocean (thrice). I had always known that Ralph Fiennes was a talented actor but it was only through watching Hail Caesar did I realise what a fine comedy actor he secretly is and what a pity it is that we hardly see him in comedies!

Channing Tatum and Scarlett Johansson are entertaining as they hams it up as the muscular and handsome musical star and the glam diva who can do no wrong but actually has a secret to hide. Tatum’s big number, a barely suppressed homerotic song and dance medley called “No Dames” which you know is the Coen brothers’ way of being ironic about how the 1950s were so unmentionably gay while modern society makes a big fuss over such supposedly implied homosexuality, is essentially just an enjoyable interlude and literally a showstopper for it does little to further to add to the plot. Similarly, Johansson’s appearance doesn’t do much for the plot although the handling of her secret does give you a better sense of the kind of stuff that Eddie has to handle as a Hollywood studio. Their existence is entertaining but really not necessary.

Sadly, while Eddie is supposed to be the anchor of the movie, his character is ironically, the most stereotypical one. Essentially Eddie is the archetypical Hollywood tough guy with a heart of gold, who is always looking out for those he must protect, solving problems created by these weaklings. You feel a bit sorry for him but never quite form a bond with him such that you are able to cheer him on. Eddie is more of a distant cousin than a real close friend.

Cast aside, the Coens do an impeccable job with the look and feel of the movie. The movie is beautiful as they employ several Hollywood backlots to help create the Old Hollywood feeling. The production and costume designers show their flair for decking the cast out in varied assortment that helps bring you back to the year of 1951 (even if you’ve never lived through it except in photographs) and the cinematographer manages a smooth look that evokes the grand Old Hollywood of yester years without feeling dated.

While the Coen brothers’ reimaging of a real Hollywood tough guy, Eddie Mannix, may entertain Hollywood outsiders like us, you can’t help but wonder what would Hollywood insiders and the real Eddie Mannix make of this movie?

(While not as masterful as some of their other pieces, the Coen brothers’ latest piece of work, Hail Caesar is enjoyable and is bound to make you laugh a fair bit) 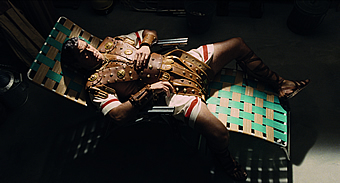