Synopsis: In the throes of World War II, Captain Maude Garrett (CHLOË GRACE MORETZ) joins the all-male crew of a B-17 bomber with a top-secret package. Caught off guard by the presence of a woman on a military flight, the crew tests Maude’s every move. Just as her quick wit is winning them over, strange happenings and holes in her backstory incite paranoia surrounding her true mission. But this crew has more to fear…lurking in the shadows, something sinister is tearing at the heart of the plane. Trapped between an oncoming air ambush and an evil lurking within, Maude must push beyond her limits to save the hapless crew and protect her mysterious cargo.

To be politically correct, Shadow In The Cloud is mostly a “one-woman-show” that stars 23-year-old Chloe Grace Moretz who will always be known to the world as Hit-Girl.

With the exception of the opening scene and the last act, Moretz’s character, Maude Garrett is stuck all alone, close up in a ball-shape gun turret of an airplane. Set during the era of World War II, the story has it that Flight Officer Maude Garrett is tasked to deliver a casing of top-secret documents from New Zealand to Samoa and her mode of transport happened to be a B-17 bomber named “The Fool’s Errand”.

The crew which comprises a group of sexist male soldiers starts to question the validity of Garrett’s statement, order and her capability as a flight officer. With zero available seats onboard, Garrett is then assigned to seat in the turret with her casing being under the care of a friendly crewman, Quaid. It’s not long that Garrett realized something is amiss. A terrifying creature dubbed the gremlin is messing around outside the bomber and in addition, the Japanese “Zero” fighters are also closing in.

Will the ragtag crew survive in the end? Or is it time again for our favourite Hit-Girl to kick some serious ass?

Funded mainly by the New Zealand Film Commission, Shadow In The Cloud created a bit of a hoo-ha after disgraced writer Max Landis (Chronicle, Bright) was credited for the script. It has since confirmed that director Roseanne Liang actually performed extensive rewrites on the original script which of course explained the reason why it’s a movie that is not afraid to delve into sexual harassment, feminism and all-out girl power.

The movie on the whole is more of a fantasy action piece than a horror creature flick. The CGI creature which resembles an over-sized bat although provides the movie’s sole entertaining factor appears only intermittently if you are expecting a full-blown visual fest. The roughly 80 minutes feature evidently struggles with its pacing whenever the gremlin is not onscreen. Luckily Chloe Grace Moretz is an old hand in pulpy silly material. The young actress still delivers a capable performance despite the goofy premise and exaggerated action sequences.

As it turns out there is a somewhat unbelievable twist to the whole saga. No, we are talking about the fantasy creature. It’s more of what Garett is hiding in the case. But we are not spoiling any of it here or giving it away. All we can say is Garett is surrounded by a bunch of useless, act-tough airmen who are good at mouthing inappropriate language but crumbles at the sight of a gremlin and Japanese attackers. And they should be thankful they have a female flight officer onboard.

Liang never goes out to make a movie that engages the mind, this is quite simply a popcorn flick made to champion female heroes. The last act is an absolute blast that will have you screaming for more though we must add, it’s absolutely not a wall-to-wall action movie nor a chilling creature feature that’s going to redefine the genre. The only memorable thing after exiting the theater is Chloe Grace Moretz is still a kick-ass hit-girl after all these years. 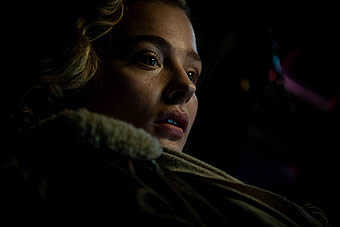