Synopsis: The story focuses on the abduction of Wu Ruofu, a Hong Kong film star, in 2004. Despite the cruelty of his abductors, Wu demonstrates an extraordinary calm that makes him more than just another kidnapping victim, aided by the brave actions of the police.

The kidnapping of prominent TV star Wu Ruofu outside a bar in Beijing’s Sanlitun district may not have made much headlines here in Singapore, but it was big news back in the Mainland - not least because his kidnappers had identified themselves as police officers prior to snatching him, but also because it raised alarm about how safe the capital was. It isn’t surprising therefore that the real-life story would become the subject of a movie, one which writer-director Ding Sheng approaches with the utmost commitment to authenticity.

Yes, despite casting Andy Lau as Ruofu, Ding strips all vanity off the Hong Kong superstar by putting him in handcuffs and binding him in heavy iron chains most of the time. To top it off, a pivotal moment at the end has Andy Lau strangled by his kidnappers using a thick red plastic-insulated wire around his neck. It is harrowing to watch all right, and you can trust us when we say there is no doubt watching it unfold that it was re-enacted for real. Notwithstanding, the rest of Lau’s restrained performance – and we mean this both physically as well as metaphorically – is just as compelling, especially how he balances humility, dignity, selflessness and raw fear in equal measure.

As tempting as it may be to call this Andy Lau’s show, he is surprisingly upstaged by Mainland actor Wang Qianyuan, who plays the kidnapper Zhang Hua. Those familiar with the case itself will know that Zhang Hua was no less than the mastermind, and it was he who had rounded up a crew in search of their latest victim barely two weeks after he had similarly held the younger brother of a gang boss for ransom and assassinated the former after collecting the money. How much of a resemblance to the actual criminal of the same name is anybody’s guess, but Wang is mesmerising to watch as the cold-blooded sociopath who had run rings around the detectives in charge of the case and who displays no sign of compunction up till the very end.

The actor-character transformation is even more remarkable considering how this is the first time that Wang is playing a villain, whose television personas are diametrically different from his role here. Wang more than holds his own with Lau, especially at the start where both are testing each other’s limits while trying to achieve their own objectives – one to stay alive, and the other to keep the former alive just long enough to get his demands. Combining a keen cunning demeanour with disarming charm, Wang keeps his audience on edge guessing just what his unpredictable and increasingly unhinged character has up his sleeves. The way Ding structures his narrative also inevitably places the focus less on Lau than on Wang, which unfolds as a race against time to figure out where Ruofu is held before he is executed by Zhang Hua’s henchmen.

Though Ruofu’s kidnapping right after he leaves a nightclub at the end of a business meeting with a potential film investor kicks off the movie, Ding uses Zhang Hua’s questioning by lead investigators Xing Feng (Liu Ye) and Cao Gang (Wu Ruofu) as a frame to fill in the events that follow immediately after Ruofu is taken. The framing does make for an interesting juxtaposition, such that Ruofu’s physical predicament is mirrored against that of Zhang Hua’s, who is strapped tightly into a chair with iron rails around his body and feet chained to the floor in the police’s interrogation room. It is Zhang who fills in both the police – and us – with what went down in the 18 hours Ruofu is taken, and from whose point of view the story develops.

Adopting a non-linear narrative may be slightly disorientating at the start, but Ding’s choice not to simply follow chronology actually proves an inspired one to lend the story greater heft. Indeed, while Ruofu’s kidnap was more spontaneous than premeditated, what isn’t coincidental is his kidnapper’s felonious behavior, and Ding goes even further back than the night of Ruofu’s kidnapping to shed light on just who both Ruofu and the police are up against. Assuming editorial control as well, Ding keeps the pacing tight and gripping even as he goes back and forth between different time periods to fill in the chronological gaps.

Speaking of tension, those looking for the sort of bombastic action from the typical Hong Kong contemporary action flick should be warned that there is hardly any here; instead, much of that tension comes from a careful calibration of the dynamic between Ruofu and his kidnappers as well as that between Zhang Hao and the police, and which Ding manages to sustain pretty much from start to finish. Ding also keeps the mood taut by filming the proceedings on handheld cameras to bring his viewer up close with the actors, lending the whole picture a gritty and intimate feel especially since many of the scenes take place within closed quarters.

Coming off ‘Police Story 2013’, ‘Saving Mr Wu’ finds Ding Sheng at his creative best, fusing the instincts he had starting honing from his debut ‘The Underdog Knight’ with a fascinating real-life story to create a riveting crime thriller. We won’t speak for those familiar with the subject matter, but those with little knowledge of the ins and outs of the case will find this as engrossing an introduction as any, brought to vivid life by an assured directorial hand and outstanding performances from Andy Lau and Wang Qianyuan. In fact, we dare say it is probably one of the best Mainland films you’ll see this year, one that by both theme and genre also makes for a welcome change of pace from the usual crop of romance or war epics that we are frankly just exhausted of.

(Andy Lau sheds all vanity to play the titular Mr Wu, but it is Wang Qianyuan’s mesmerizing performance as his nemesis that shines in a taut, tense crime thriller) 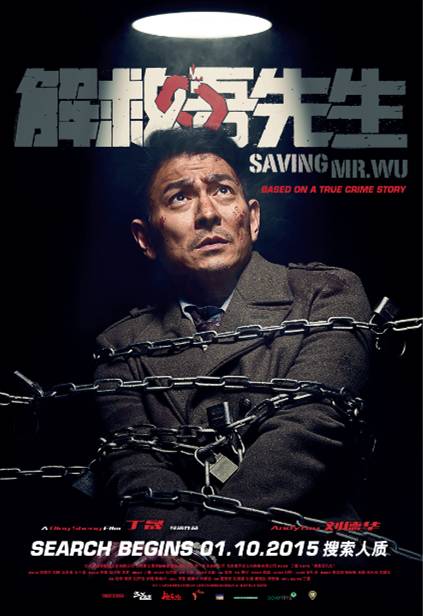