Synopsis: Forced to leave service after turning blind, a former detective ekes out his living by solving cold cases for police rewards. When an attractive hit team inspector enlists his help in a personal case, he decides to take a stab.

‘Blind Detective’s’ pedigree reads like a match made in cinematic heaven - on one hand, it boasts the reunion of Hong Kong’s golden screen couple, Andy Lau and Sammi Cheng, after almost a decade; on the other, its creative team made up of Johnnie To and Wai Kar Fai is arguably one of the most successful partnerships in the Hong Kong film industry. Yet it is precisely because of the latter reason that one should know better than to expect a conventional movie - after all, neither To nor Wai have ever liked to be associated with just perfunctory.

And ‘Blind Detective’ bears that similarly uncharacteristic trait, defying easy genre characterisation by treading right on the middle line between a slapstick rom-com and a crime thriller. It is a very fine balance no doubt, one that proves too tricky from time to time even for a director of auteur status like To, so criticism that the movie is tonally all over the place is somewhat not unfounded. That doesn’t mean however that it isn’t entertaining; on the contrary, it pulses with its own eccentric beat, and the more you get used to its offbeat tone, the faster you’ll begin to appreciate its own unique charm.

To introduces us and his odd couple to each other with an acid attack case that both Lau’s retinally-damaged former top cop Johnston and Cheng’s junior crime squad cop Ho are on the trail of. Ho’s superior Szeto (Guo Tao) assigns Ho to follow Johnston when he spots the latter while surveilling a busy Hong Kong street for the perpetrator, and indeed using his keen sense of smell, Ho manages to track the culprit to the roof of a high-rise building. It is there that we realise To’s comedic intentions - upon being discovered, Johnston and Ho engage in some quickstep dance around each other to shield themselves from being poured on with acid.

Turns out that since losing his sight four years earlier, Johnston has been using his other senses and formidable deductive powers to solve crimes solely for the purpose of earning the associated bounties. Having made acquaintance, Ho engages Johnston to do a little sleuthing for her - more specifically, to assist her in finding a childhood friend with a tragic past called Minnie who disappeared many years ago. Under the guise of working more closely with her, Johnston moves into Ho’s apartment - though an earlier scene which demonstrates his solitude living alone suggests that he wants company too.

While Minnie’s case frames the nature of their interaction, almost half the movie is in fact spent on other cold cases that Johnston is still chasing the bounty for - and like Ho, we too are taken on a couple of these bizarre diversions. One particularly outlandish case has Johnston attempting to piece together a murder scene in a morgue with some generous help from Ho, the re-enactments played for broader-than-broad laughs with a hammer, a motorbike helmet and a TV set thrown in. Johnston’s technique is to attentively reconstruct the crime scene, which given his disability, makes Ho a useful companion to participate in these elaborate and occasionally over-the-top sequences.

At least for the middle section, Wai’s script tends to meander, not least for the fact that it tries to add in some unnecessary subplots including Johnston’s crush on a tango dancer (Gao Yuanyuan) and his rivalry with Szeto. Only towards the last third does Johnston get down to business on Minnie’s case, the trail of clues leading them to a love triangle in Zhuhai involving a pregnant woman (Eileen Yeow) and a teppanyaki chef (Ziyi) as well as to a psychotic serial killer responsible for the deaths of several missing young women over the past few years.

Even then, those familiar with To’s rigour in shooting well-detailed procedurals like this year’s ‘Drug War’ may not be used to what appears to be a lack of storytelling discipline here. To plays it fast and loose here, seemingly reluctant to exert tighter directorial rein over Wai’s slackly constructed plotting; yet seen through a less critical perspective, To in fact gives as much, if not more, weight to the relationship between Johnston and Ho as to the central mystery, each of the distractions in fact deepening their quirky but no doubt romantic attraction.

Just as in most Wai films, there is a moral at the end when the truth about Minnie’s disappearance is revealed, a cautionary lesson if you will about the consequences of being blinded by one’s own stubbornness. Viewed through this lens, Johnston and Ho’s earlier encounters gain some meaningful significance - ultimately, both Johnston and Ho have also been guilty of refusing to let go of their respective baggage from the past, and it is with each other that they learn to recognise the importance of moving on. Yet it is a point that may be lost on many audiences, who are likely to be frustrated by the alternating mix of madcap laughs and overdone acting.

Yes, while there is little doubt of the palpable chemistry between Andy Lau and Sammi Cheng, both are guilty of crossing the line into histrionics at times. Lau is arguably best during his character’s quieter and more introspective moments, in particular when he visualises himself communicating with victim and suspect alike in dreamlike fashion; unfortunately, his real-life interactions tend to consist of him flailing and shouting exaggeratedly. Cheng is thankfully more subdued most of the time, and amply demonstrates her gift for physical comedy especially during the crime scene re-enactments.

It’s hard to imagine any other screen couple in the roles of Johnston and Ho, which is another way of saying that the movie probably would not work with someone else in Andy and Sammi’s shoes. And by virtue of that, this genre mash-up is unequivocally their show, which in the hands of Johnnie To and Wai Kar-Fai, is quite a different creature from the usual Hong Kong comedies or for that matter detective thrillers. The combination of both makes for a deliberately uncharacteristic tone that is both weird and wacky, but there is still an undeniably idiosyncratic charm about it that deserves an appreciative audience. 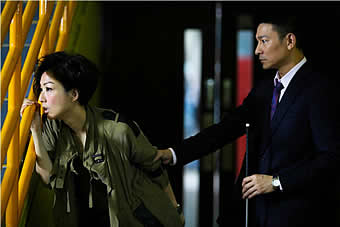 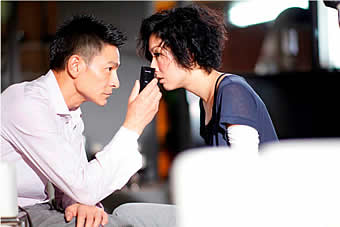 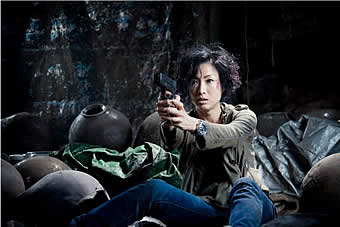 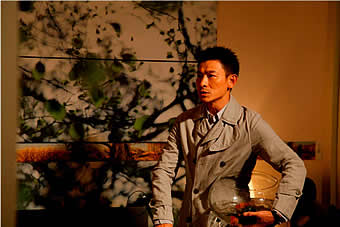 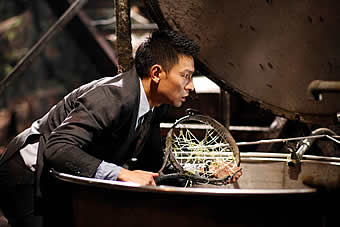 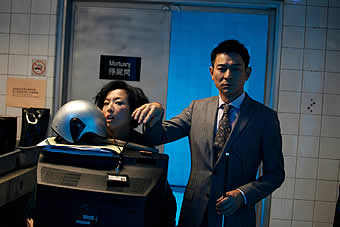 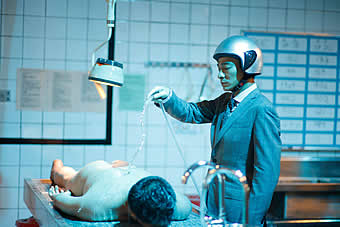