Synopsis: Bodi (Luke Wilson) is a wide-eyed mastiff without a dream. He spends his days training under his dad Khampa (J.K. Simmons) to take over guarding their village of lovable but idiotic sheep. But hard as Bodi tries, he's painfully aware that he cannot fill his father’s shoes. Everything changes the day Bodi discovers the radio (aka “magic singing box”) and becomes infatuated with a thing called “rock ’n roll.” He has found his dream. But his constant need to make music threatens Khampa's sanity, and the security of the village. After a heart-to-heart with the town sage Fleetwood (Sam Elliott), Khampa allows Bodi to leave the village and pursue his passion. Just as Bodi nears his goal of becoming a bona-fide musician, he realizes that his presence in the city has drawn the attention of his father’s old enemy, a wolf gang headed up by Linnux (Lewis Black). Captured by one of Linnux's henchmen, Riff (Kenan Thompson), Bodi agonizes as the wolves beat a path towards his village. In the end, as Bodi returns to his father’s side to defend his home, everyone comes to discover that music has more power than they ever imagined.

‘Rock Dog’ is one of the oddest animated movies we have seen – and we do not mean that in a good way.

But first, it probably helps to understand the context behind this weird mishmash of subplots that just don’t fit well with one another. Though animated by American studio Reel FX (best known for 2014’s ‘The Book of Life’ and 2013’s ‘Free Birds’), this adaptation of the graphic novel of the same name by Chinese rock star Zheng Jun was fully financed by Chinese money, and at US$60 million, is reportedly the most expensive Chinese-financed animated production to date.

That background sort of explains why its lead protagonist Bodi (voiced by Luke Wilson) is a Himalayan mastiff who was born in the picturesque Snow Mountains to a literal watchdog Khampa (J.K. Simmons) of a hamlet of sheep. The cute hand-drawn opening prologue explains how Khampa had defended the woolly inhabitants from a pack of wolves led by the villainous wolf Linnux (Lewis Black) years ago with his signature ‘Iron Paw’ move, and expects Bodi to do the same if only he learns to ‘find the fire’ – or whatever that means.

Khampa responds with chagrin therefore when Bodi expresses only musical ambitions – first attempting to snuff them out by locking all the musical instruments in the town up; then plotting with some of the village sheep to dress up as wolves in order to scare Bodi. Only upon the advice of the village elder Fleetwood Yak (Sam Elliott, who also provides the occasional narration through his character) does Khampa relent and allow Bodi one shot at pursuing his dream of being a ‘rock n roll’ singer.

If all that sounds a little awkward, it truly is; not least because Bodi’s idol happens to be a British rock legend named Angus Scattergood (Eddie Izzard) who is struggling with songwriter’s block when the former visits him in his Beverly Hills-esque mansion. That mansion lies somewhere on the outskirts of a strange metropolis which seems to be modelled after parts of New York and Shanghai – there is a park where ‘rock n roll’ aficionados gather which is obviously ripped off from Central Park, and noodle bars with signs in Chinese characters (for that matter, the posters displayed in the Tibetan sheep village are only printed in Chinese). The East-West hodgepodge is disorienting in and of itself, and it doesn’t help that the story is ultimately utterly by-the-numbers.

Oh yes, somewhere along the way, Bodi will help Angus overcome his temporary creative impediment and in the process realize his own talent. You can also probably guess that Bodi will ‘find the fire’ and become the guardian that his father had always wanted him to be, just in time as Linnux shows up with his pack of clumsy, dull-minded goons to threaten the sheep village once again. If we’re leaving out Bodi’s fellow wannabe musicians Darma (Mae Whitman) and Germur (Jorge Garcia) or Linnux’s two right-hand minions Riff and Skozz, it’s because they serve no consequence other than to give the narrative a kick towards the finale. Considering that script credit goes to former Pixar executive Ash Brannon and Kurt Voelker, it is no wonder the narrative plays out so familiarly like countless other second-tier animations which have come before it.

But really, ‘Rock Dog’ is not even second-tier, despite having the co-director of ‘Toy Story 2’ and ‘Surf’s Up’ assuming directorial duties here. The CGI visuals are flat, dull and emotionless, and the lines are unwitty to the point of tedium. Aside from some 90s classics like Foo Fighters’ ‘Learn To Fly’ and Radiohead’s ‘No Surprises’, there is almost no rock-n-roll music per se – even the movie’s theme song, ‘Glorious’, is at best a generic pop song that is easy on the ear but largely forgettable. It is no wonder then that the voice actors seem hardly inspired, delivering their lines with only the most perfunctory bit of character.

Like we said at the start, the obvious nods to the melding of East and West cultures makes for an odd combination, demonstrating that whether in live-action or in animation, this thus0far theoretical concept of Sino-American collaborations with hoped-for international appeal demands much more finesse and skill than what we’ve seen so far. Even so, at its basics in terms of storytelling, character design and animation, ‘Rock Dog’ has no bark and no bite, and even for a less demanding under-10 audience, will likely come off tired and tiresome.

(An awkward mishmash of Eastern and Western cultures, 'Rock Dog' is an unwieldy Sino-American production neither rocks nor rolls and doesn't even need to try to 'play dead') 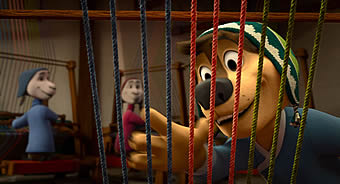 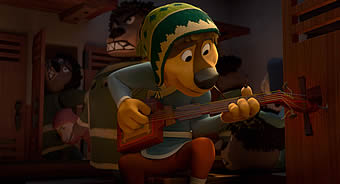 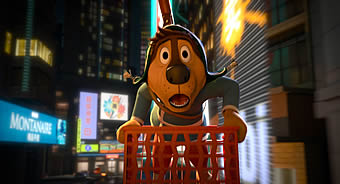 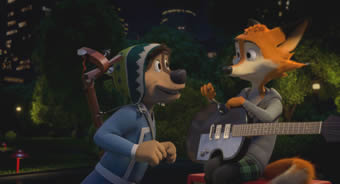 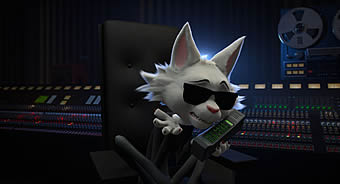 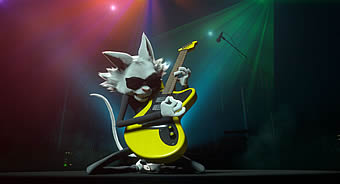