Synopsis: Set in a world like ours but entirely inhabited by animals, Sing stars Buster Moon (Academy Award winner Matthew McConaughey), a dapper Koala who presides over a once-grand theater that has fallen on hard times. Buster is an eternal optimist—okay, maybe a bit of a scoundrel—who loves his theater above all and will do anything to preserve it. Now facing the crumbling of his life’s ambition, he has one final chance to restore his fading jewel to its former glory by producing the world’s greatest singing competition. Five lead contestants emerge: A mouse (Seth MacFarlane) who croons as smoothly as he cons, a timid teenage elephant (Tori Kelly) with an enormous case of stage fright, an overtaxed mother (Academy Award winner Reese Witherspoon) run ragged tending a litter of 25 piglets, a young gangster gorilla (Taron Egerton) looking to break free of his family’s felonies, and a punk-rock porcupine (Scarlett Johansson) struggling to shed her arrogant boyfriend and go solo. Each animal arrives under Buster’s marquee believing that this is their shot to change the course of their life.

Matthew McConaughey as a koala who plans to save his theatre by organising a singing competition? This we’ve gotta watch.

It doesn’t matter if Illumination Entertainment, the animation film production company owned by Universal Studios can’t stop milking money from the Minions, its borderline irritating mascots. How the characters from the Despicable Me movies continue to make adults go gaga is one of life’s greatest mysteries.

Okay, back to McConaughey playing a koala in this animated feature. The 47 year old Academy Award and Golden Globe winner (Dallas Buyers Club) has such a cool southern accent, we would watch him voice any cartoon character. The actor always seems to be mumbling through his Texasaccent, and it is way too cool for school. We heard McConaughey voicing Beetle in Laika’s beautiful Kubo and the Two Strings a while ago, and he is back headlining another animated film.

Buster Moon (what a name!) is the protagonist here – and he has his father’s life savings in a rundown Broadway style theatre. Fate hasn’t been kind to the koala, and he has to come up with something fast if he doesn’t want the bank to take over the property. Due to an adorable miscommunication with his chameleon assistant, the singing competition he wants to organise promises a grand prize of $10,000 instead of the $1000 he can afford. What happens next? A motley crew of animals come forward enthusiastically to, well, sing.

There’s Reese Whiterspoon’s Rosita, a pig with 25 piglets and an overworked hubby – the housewife performs a mean rendition of Katy Perry’s “Firework”. There’s Scarlett Johansson’s Ash, a porcupine who has been dumped by her boyfriend and channels her angst to her rock guitar. There’s Taron Egerton’s Johnny, a gorilla who wants to lead a different lifestyle from his criminal father – the English actor’s accent is put to good use in his cover of Sam Smith’s “Stay With Me”.

Elsewhere, Tori Kelly is a timid elephant with a big voice, Seth McFarlane is an haughty mouse with a big ego, and Nick Kroll is hilarious as a flamboyant male pig in tights who sings and dances to Lady Gaga’s “Bad Romance”.

The list of recognisable names doesn’t stop there in the ensemble cast. There’s also John C Reilly as a sheep who plays best friend to Buster Moon, Jennifer Saunders as a diva sheep who can’t stand pop culture and Leslie Jones as a kind elephant who gives wise advice to her dejected granddaughter.

Sure, there are smarter animated movies about different animals living in a community (Zootopia, The Wild and the Madagascar franchise come to mind) – but you will love this 108 minute movie because it is fun, breezy and easy to watch. You will hum along to the countless number of songs featured in the musical comedy directed by Garth Jennings. Who wouldn’t say yes to Carly Rae Jepsen’s “Call Me Maybe”, Nicki Minaj’s “Anaconda”, Avril Lavigne’s “My Happy Ending” and get ready for this – Seal’s “Kiss from a Rose”?

And nothing beats watching McConaughey’s Buster Moon stripping down to his swimming trunks to wash cars.

(Sing along with the motley crew of animals in this fun and rousing animated movie!) 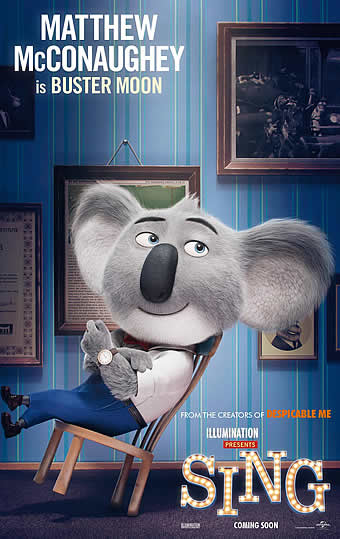 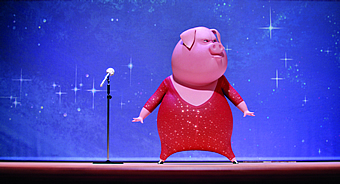 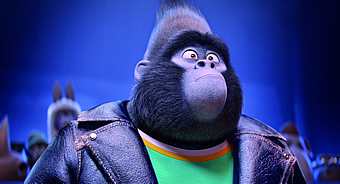 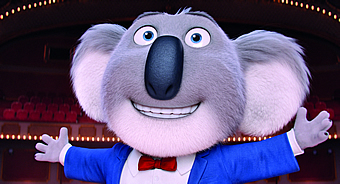