Synopsis: Picking up immediately after the events in Resident Evil: Retribution, Alice (Milla Jovovich) is the only survivor of what was meant to be humanity’s final stand against the undead. Now, she must return to where the nightmare began – The Hive in Raccoon City, where the Umbrella Corporation is gathering its forces for a final strike against the only remaining survivors of the apocalypse.

As with all franchises, words like final, ultimate andlast become tools for marketing than real reflections of actual closure. Folks tell me that they intend to watch this film because “I want to see how it ends” or “I might as well finish it”. See how that works?

Alice (Milla Jovovich) is back. Emerging from the wreckage in a dusty, apocalyptic land, our zombie tomb raider figure trudges with signature bewildered expression across a Max Max-inspired landscape. She conveys purpose with her searching, while the audience gets into gear with the same formulaic deja vu at the opening of every movie in the series.

After a monster fight to get the adrenaline going, The Red Queen - a mainframe computer artificial intelligence - appears at an abandoned facility, beseeching Alice with a mission -  to retrieve an antidote to the toxic T-virus, and save Mankind from complete annihilation. Because you know, it’s the final chapter.

The computer, having been morally reprehensible in earlier installments, does not convince Alice. But then again, what’s a superhuman girl to do with nothing planned in her diary? So it isn’t long before she makes her way back towards ground zero, Raccoon City, where the infection started.

Her mission is to enter into The Hive (Umbrella Corp’s headquarters and research facility) and secure the antidote, then release the airborne cure so that the corporation doesn’t execute their Bible-inspired plans - that of a purposeful cleansing so that the selected rich and powerful get a chance at a new world order.

“Sometimes I feel this has been my whole life. Running. Killing,” mutters the tired Alice. We feel you girl.

Resident Evilis pretty much all you can expect a movie in the series. You’ve got your high-kicks and logic-defying acrobatics. You’ve got a year’s worth of Jovovich’s grunting and wincing. And you’ll most definitely get your tickets worth of violence and gore. Poor Alice gets more variation in her costume between movies than she does in her plot as the passive-aggressive reluctant savior.

Looking at it as a whole, the story does a good job of returning to its roots. There’s references to earlier storylines and sets. Old characters appear to aid Alice’s grand goal. Her old nemesis Dr. Isaacs (Iain Glen) and Albert Wesker (Shawn Roberts) give their all to destroy her. It’s the final showdown of the good versus evil, with some zombies at the side.

But the truth is, an overzealous hand dimmed this episode of Resident Evil. Director Paul W. S. Anderson has overworked the show, like a crazy conductor. He probably felt “diced edits” and ïmpactful soundtrack”, but all we got was a headache.

The editing came across frenetic, with sequences flying by with such speed that you can’t even lock onto any target or content. It’s Transformers 2007 all over again. And the score? Brash and offensive. There’s no depth or restraint, music pounding down like a sledgehammer. Even the sound effects are overbearing - grating and jarring with no other purpose than to keep our nerves fried. With no escape from visual or aural over-stimulation, one quickly gets more frustrated than entertained.

The move ends in a way that bears debate as to the finality of the franchise. But if Ms. Jovovich is as smart as she is beautiful, she should know that it’s time for her to relinquish residency.

(A closing chapter that overreaches, with decent plot ruined by an overworked score and editing. Pity.) 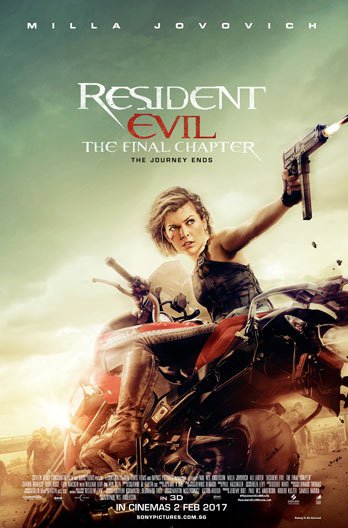