Synopsis: The wildly successful film franchise adaptation that has grossed nearly $700 million worldwide to the popular video game series, Resident Evil, returns in its highly anticipated fifth installment, RESIDENT EVIL: RETRIBUTION in state-of-the art 3D. The Umbrella Corporation’s deadly T-virus continues to ravage the Earth, transforming the global population into legions of the flesh eating Undead. The human race’s last and only hope, ALICE (Milla Jovovich), awakens in the heart of Umbrella's most clandestine operations facility and unveils more of her mysterious past as she delves further into the complex. Without a safe haven, Alice continues to hunt those responsible for the outbreak; a chase that takes her from Tokyo to New York, Washington, D.C. and Moscow, culminating in a mind-blowing revelation that will force her to rethink everything that she once thought to be true. Aided by newfound allies and familiar friends, Alice must fight to survive long enough to escape a hostile world on the brink of oblivion. The countdown has begun.

Unless you're a die-hard fan of the video game, you're unlikely to recall much of the details or for that matter, the fate of the various supporting characters in the previous four instalments of the undying 'Resident Evil' franchise. Nonetheless, a significant part of how much you'll enjoy 'Retribution' depends on your memory of key ones like Jill Valentine from 'Apocalypse', Albert Wesker from 'Apocalypse' and 'Extinction', and Rain Ocampo from the very first 'Resident Evil' – a tall order, in our opinion, from anchor writer/director Paul W.S. Anderson considering how unremarkable and repetitive most of the instalments were.

The reunion of these beloved video game characters should portent well for this fifth movie, but unfortunately the joy of their reappearance is short-lived. On one hand, Anderson doesn't bother to help neophytes understand their history with Alice and the Umbrella Corporation; on the other, his film is just too dreadful to give any of these characters the welcoming party they deserve. Yes, if you were disappointed with 'Afterlife', be prepared to relive that same dejection with 'Retribution' - which like the former is a loud, dumb and ultimately pointless exercise.

Picking right up after the events of the last film, Alice is once again recaptured by the Umbrella Corporation after her escape to Arcadia, a cargo tanker that was meant to be a last safe haven for what was left of the humans. Brought to an large underground secret facility where each cavernous section is made to resemble one f the major cities of New York, Moscow and Tokyo, Alice finds an ally in Ada Wong (China actress Li Bingbing in her Hollywood debut), a survivor captured by Jill – and by the way, Jill is now an Umbrella agent after being brainwashed using a mind-control device attached at her chest.

The plot of any of the Anderson-scripted 'Resident Evil' movies tend to be simple to the point of being simplistic – an apt reflection in fact of the measure of his scriptwriting abilities really – and 'Retribution' is no different. Here, Alice and Ada are teamed with five rogue members of the resistance led by Leon (Johann Urb), who infiltrate the facility with the intention of detonating it from within. Evade the Red Queen's (oh yes, she makes a return as the ultimate villain here) armies, rendezvous at the place called the 'submarine pens' and get to the surface before the bombs go off – that's about as complicated as the story goes.

Of course, the point of these 'Resident Evil' movies was never story or perhaps even character – but one will be hard pressed to find the action sequences redeeming too, and that is regardless of whether you have been a fan of Anderson's slo-mo stylistics. Yes the slo-mo accompanied with rock music shots are still here (and if it's any consolation, toned down a little from 'Afterlife's' excess); what however disappoints is the tempo and the choreography, which going by how lacklustre both are here, seems to suggest Anderson and his team are fast running out of imagination.

Indeed, the somewhat innovative camera angles by Glen MacPherson that maximise the third dimension where possible fail to disguise the fact that there is not one single memorable action sequence. Most disappointing are Leon and his team's confrontation with an entire hooded army in Moscow's Red Square (especially considering how the area was shut down for the first time just for shooting), as well as theirs and Alice's subsequent run-in with the huge beast known as Licker – there are no shortage of guns or ammunition in both these sequences all right, but simply pumping both out relentlessly without any measure of restraint or strategy isn't exactly exciting or interesting.

The best Anderson manages to achieve is an extended one-on-one showdown between Alice and Jill on one hand, and Leon and a Les Plagas-infested Rain on another – but even in what is supposed to be the highlight of the film, the seen-it-done-that combination of slo-mo weapons, slo-mo bullets, slo-mo dodging and a dash of CG-ed anatomy display fails to raise our pulses as much as we had hoped that it would. And like the instalments that have come before it, this one ends on another cliffhanger with Alice restored and another fight looming – not to mention a shoo-in for what could be the title of the inevitable next film, 'The Last Stand' (not to be confused with Schwarzenegger's next movie).

As always too, Milla Jovovich remains one of the few – if not the only – reason to watch the movie. Anderson knows just that, which is why within the first ten minutes, we get to see Alice naked save for two white cloths over her front and back – but the real disservice he does to his real-life wife is trying to build more emotion into her character through a contrived subplot revolving around a motherly bond she develops for a hearing-impaired child Becky (Aryana Engineer). Given how stilted the dialogue is, the less is said in the film the better – and nowhere is this truer than in Li Bingbing's case, coming off stiff and wooden no matter how admirable her effort at enunciating her English lines.

If even the action fails, then you can pretty much surmise that there is very little reason to catch this. It is also disappointing considering how unambitious Paul W.S. Anderson continues to be with what is the most successful video game to screen franchise thus far, content to rehash the same formula from his last films again and again. No matter how his name has been synonymous with the 'Resident Evil' films, the only hope of an 'Afterlife' that will save this series from 'Extinction' is really a new writer/ director – only that alone is 'Retribution' enough for the lacklustre films both fans and non-fans of the video game have been made to endure. .

(Loud, dumb and pointless – if even the action fails to thrill, then you know this franchise is well past its ‘Afterlife’ and close to the point of ‘Extinction’) 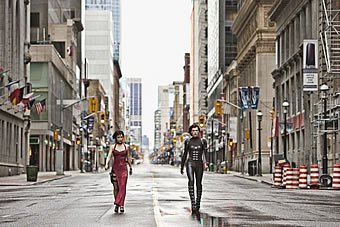 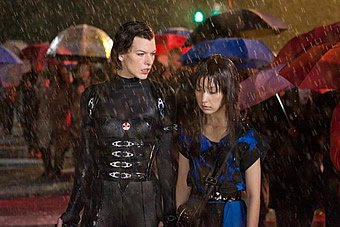 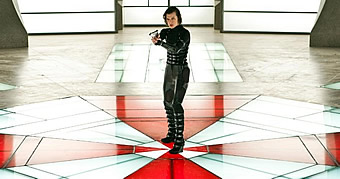