Synopsis: In Pixels, when intergalactic aliens misinterpret video-feeds of classic arcade games as a declaration of war against them, they attack the Earth, using the games as models for their various assaults. President Will Cooper (Kevin James) has to call on his childhood best friend, ’80s video game champion Sam Brenner (Adam Sandler), now a home theater installer, to lead a team of old-school arcaders (Peter Dinklage and Josh Gad) to defeat the aliens and save the planet. Joining them is Lt. Col. Violet Van Patten (Michelle Monaghan), a specialist supplying the arcaders with unique weapons to fight the aliens.

Poor Adam Sandler. This reviewer fears that his latest work might be the final nail in the coffin. The ex Saturday Night Live cast member, who won the hearts of many hopeless romantics in 1998’s The Wedding Singer and made countless Scrooges laugh out loud with his signature goofball humour in comedies like Happy Gilmore (1996), The Waterboy (1998) and Big Daddy (1999), have been receiving some unkind criticisms for his recent movies. After a series of panned movies like Jack and Jill (2011), Blended (2014) and The Cobbler (2014), people were waiting to see how the latest Happy Madison Productions (a film and TV production company Sandler founded in 1999) would fare.

And very unfortunately, reviews have been anything but kind, stating that this is finally “game over” for the 48 year old actor.

Call it biasness, but this writer did not think this title deserved all the flak it’s been receiving. Based on a 2010 short film of the same name, this science fiction comedy sees evil aliens declaring war on human beings after misinterpreting video feeds of classic arcade games like Pac Man, Space Invaders and Tetris.

People were genuinely excited about the premise, especially amongst those born in the 1980s. Arcade games played a very important role in their growing up years, and it wouldn’t have been a monstrous challenge for the older (and not forgetting more affluent) folks to identify with the theme - remember how Disney’s computer animated Wreck It Ralph made nostalgia so cool to embrace?

With a premise that is out of this world as Tim Herlihy and Timothy Dowling’s screenplay, one should just leave logic at the door. That said, the 105 minute movie is a breeze to sit through (what were you expecting, an art film?), with predictable story development and entertaining showdowns between, yup, video game characters and human beings.

The ensemble cast is also something to shout about – Sandler has gathered folks like Kevin “Mall Cop” James, Josh “Olaf” Gad, Peter “Tyrion Lannister” Dinklage and Sean “Ned Stark” Bean to attract fanboys (and maybe some girls) to part with their money to watch this in the theatres. There’s also Michelle Monaghan (Source Code), Brian Cox (X2: X Men United) and a cameo appearance by Dan Ankroyd (Ghostbusters). Somewhere in the mix is tennis player Serena Williams and TV personality Martha Stewart. With such a mix it would be easy to say that the filmmakers have lost focus on the story, and are more concerned earning quick bucks at the box office.

While that is not entirely wrong, this columnist is of the view that a movie like that is meant for pure entertainment. Are there lame jokes which you will chuckle at? Yes. Are the computer effects decent? Yup, it’s quite a visual treat. Are there moments you want the villainous Centipede and Donkey Kong to be destroyed by the good guys? You bet.

And so it is with these factors taken into consideration that the harsh reviews for this title may seem somewhat unwarranted. Although there is nothing surprising about Sandler’s performance anymore (critics are calling him lazy), were you seriously expecting to deliver an Oscar winning performance? Maybe it’s time to take things less seriously and enjoy the popcorn flick for what it is, just like how we were suitably entertained with those old school arcade games.

(This may not be the most intelligent movie you’ve watched, but it does its job of providing adequate entertainment for 105 minutes) 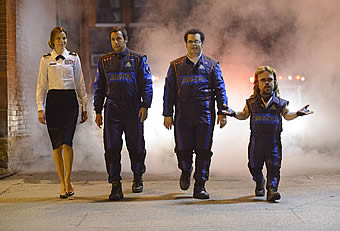 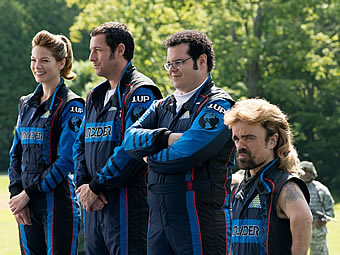 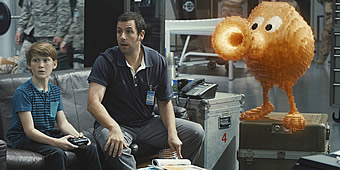