Synopsis: In Men in Black 3, Agents J (Will Smith) and K (Tommy Lee Jones) are back... in time. J has seen some inexplicable things in his 15 years with the Men in Black, but nothing, not even aliens, perplexes him as much as his wry, reticent partner. But when K's life and the fate of the planet are put at stake, Agent J will have to travel back in time to put things right. J discovers that there are secrets to the universe that K never told him -- secrets that will reveal themselves as he teams up with the young Agent K (Josh Brolin) to save his partner, the agency, and the future of humankind.

There’s an undeniable staleness that ‘Men in Black 3’ can’t quite shake off, the third movie in the franchise that arrives ten years after the first sequel and 15 years since the original. No, we’re not talking about the fact that director Barry Sonnenfeld once again banks the movie on the offbeat chemistry of the genuinely affable Agent J and the lovably gruff Agent K- which to be honest is still the best thing the series has going for it. Rather, the premise is too familiar, the gags are less inspired, and the story- sans the surprisingly moving finale- feels tired.

And no wonder really, since this third-parter was effectively shepherded into production without a finished script- so much so that filming had to shut down midway so that professional Hollywood script doctors David Koepp and Jeff Nathanson, as well as Will Smith’s personal dialogue doctor Mike Soccio, could refine the original writing from six screenwriters (of which only Etan Cohen receives a credit). From what we see of the finished product, it hasn’t helped much, and the very faults that made Sonnenfeld pull the plug in the midst of shooting are still all too apparent.

Once again, the mission is yet another rogue alien threatening the future of the planet, who also happens to be the lone survivor of a hostile alien race. Played with cool menace by Jermaine Clement (of ‘Flight of the Conchords’), Boris the Animal has been holed up in lunar prison for the past 40 years after being apprehended by none other than Agent K. So following an exciting opening sequence featuring a slinky Nicole Scherzinger, Boris breaks out of his confinement and vows revenge on K for maiming him the last time they met.

Meanwhile, the buddy-cop dynamic is still alive and well between Will Smith’s Agent J and Tommy Lee Jones’ Agent K- though back at HQ, chief Z (Rip Torn) has been killed off and replaced by an unexpectedly quirky Agent O (Emma Thompson). Z’s death also begets one of the funniest scenes in the movie, where both Agents K and O take turns demonstrating the social ineptitude of the agency through their respective eulogies.

In keeping with the brisk economical pace of the first two movies, it isn’t long before J and K come face to face with Boris and his nefarious gang of alien allies in a Chinese restaurant that offers otherworldly delicacies for its extraterrestrial customers. That brilliantly shot shootout also forms the culmination of the first act, undoubtedly the best among the film’s three-act structure, combining some thrilling action choreography with the ever-fascinating menagerie of alien types conceived by series regular Rick Baker.

What promise there was at the beginning however quickly falls apart in the second and third act, which employs the oft-used time-travel narrative device to bring J back to 1969. That’s the year Boris was caught and imprisoned by K, and the inter-galactic marauder has since transported himself back in time to assassinate said agent. Except for an alien with a detachable head J uses as a bowling ball as well as a multi-dimensional seer Griffin, there isn’t much out-of-this-world fun that this middle act offers.

Instead, Sonnenfeld turns the joke on J by constantly riffing on the unlikely pairing between him and a 29-year-old K (Josh Brolin). Turns out that K wasn’t always the curmudgeon J had known him to be, which provides a welcome change of dynamics between J and K compared to the last two movies. While there’s no denying that Brolin is very good at replicating Jones’ deadpan mannerisms, it is a one-note gag that soon loses its novelty and would have even more quickly lost its appeal were it not for the fantastic chemistry between Smith and Brolin.

As is prerequisite for any time-travel movie, Sonnenfeld pokes fun at the icons and prevailing social norms of the era. Nonetheless, J’s run-in with a pair of racist cops while driving a stolen luxury car falls flat; while a sequence alluding to the Age of Aquarius set in Andy Warhol’s Factory (with Bill Hader playing the larger-than-life character as a secret MIB agent) again fails to inspire much hilarity despite the screenwriters’ valiant attempts at generating some laughs through an awkwardly cast misunderstanding between Warhol and J.

There is a surprising reliance on exposition within the second act, but some middling plot developments and uninteresting dialogue undermine an otherwise more character-driven approach than the previous films. Only in the third and final act when both heroes and villiains young and old descend on Cape Canaveral for the launch of the Apollo 11 moon module does the movie regain its lost momentum, though the overblown finale rarely matches up to the pizzazz of the earlier climax in the first act.

Thankfully, a last-minute twist that casts the relationship between J and K in a whole different light provides unexpected poignancy that will be especially fulfilling for fans of the series- though as is typical of time-travel premises, this one also requires you to look past its logical loopholes. The backbone of the trilogy has always been the odd-couple pairing of J and K, and whether the original Tommy Lee Jones or new entrant Josh Brolin, both capture the enjoyably idiosyncratic nature of their original banter.

Not without its attendant pleasures therefore, ‘Men in Black 3’ makes for a passably entertaining affair that- like its immediate predecessor- fails to live up to the spirit and energy of the original. Indeed, despite an invigorating first act, the rest of the film- which had to be sent to the script clinic while shooting- is only intermittently entertaining with both its gags and dialogues lacking inspiration. Those looking for a firm dose of nostalgia will still find it here, thanks to winning performances by Smith, Jones and Brolin- but there’s only so much fun you can have with the old and familiar.

(Lacking the inspiration and energy of the original, this third entry in the franchise nonetheless rehashes the chemistry between the odd-couple pairing of Agents J and K for a passably entertaining blast-from-the-past) 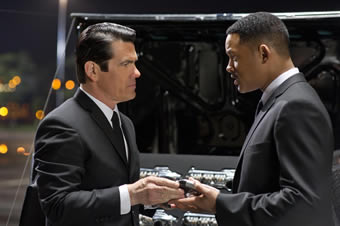 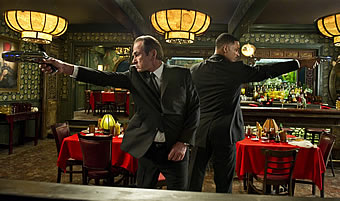 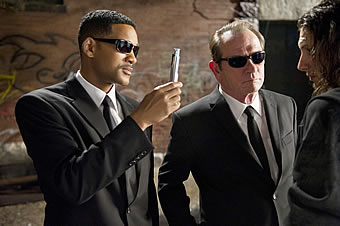 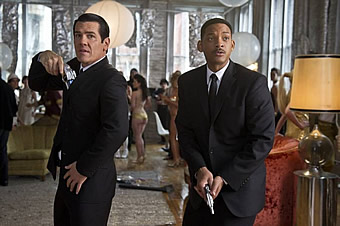 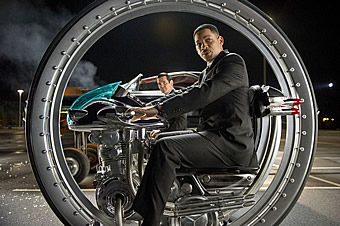 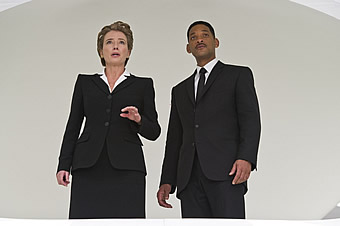 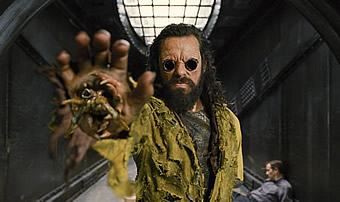