Both coming out of failed marriages, Ji-ho and Hyo-young are not open for the possibilities of new love. A week before the new year, will they be able to get over the trauma and embrace this new love? # Revive the Thrill of Romance

Heartbroken after being dumped, Jin-ah heads to the other side of South Korea and encounters Jae-hun who also has left Seoul behind. A week to the new year, can they find a turning point in their lives and love? # Refresh from the Burned-out Past

Yong-chan and Yaolin are an international couple soon to get married. But their already- growing marriage blues begin to get worse as Yong-chan is swindled out of his wedding savings. A week to the new year, will they be able to finally set up a real family? # Reset your Love-Translator

A Paralympic snowboarder Rae-hwan pops a question to his long-time girlfriend Oh-wol. They are a perfect match in their eyes, but not in other’s point of view. A week before the new year, can this long-term couple keep their love strong? # Remember the Moment She Said “Yes”

ONE WEEK TO THE NEW YEAR Stories of anxiety and hope unfold following four couples wishing a handful more of happiness for the new year.

Presented as a series of romcom vignettes, New Year Blues is mould in the same manner as Valentine’s Day and New Year’s Eve. Since this one comes from Korea, don’t expect Ashton Kutcher, Halle Belle or Julia Roberts to turn up in this ensemble drama.

Paralympic snowboarder Rae-hwan is ready to walk down the aisle with his girlfriend, gardener Oh-wol. But because of his handicap, Rae-hwan feels he will never be able to match up to Oh-wol and society’s expectations of him. The next guy Yong-chan runs a small tourism company and when his Chinese girlfriend, Yaolin plans to hold a lavish wedding in both Korea and her hometown, Yong-chan feels the mounting financial pressure especially when his staff has recently absconded with his savings.

The third guy is a cop named Ji-ho who is being assigned to protect a physiotherapist, Hyo-young who has a stalking ex-husband. The last happened to be a young lady, Jin-ah who has been dumped by her long-term boyfriend and is now on her way to Bueno Aries to clear her mind.

The whole point of having the movie being set five days before New Year is plain gimmicky. Nothing worthy or relevant to the entire movie. In fact, there are no apparent reasons to do so however since National Liberation Day of Korea Blues don’t sound catchy or right, we have to stick with the universally related New Years’ Eve.

Out of the four love stories, the most entertaining one goes to Yong-chan and Yaolin. Not that their love story is the most captivating or special. But Yong-chan has a lovable elder sister played by veteran Yum Hye-ran that constantly has us in giggles with her antics. The love story of Ji-ho and Hyo-young can probably spin-off to a full-length feature given that Hyo-young’s creepy husband likely has more tricks up his sleeve while the fumbling Ji-ho who has been divorced for the past six years deserve more screentime besides doing pottery with Hyo-young.

Who needs Niagara Falls when you can afford to go all the way to Argentina? The money shots of the entire movie no doubt go to Jin-ah’s story. There’s nothing like a romantic trip to watch the magnificent Iguazu Falls with conveniently, a Korean oppa who worked locally as a wine delivery man as your companion. The least inspiring of all however is the relationship between Rae-hwan and Oh-wol which falls pretty much flat right from the beginning.

New Year Blues is a gathering of various characters caught in a week where Cupid is clearing his annual leave. The entire cast members did a decent job trying to live up to its theme and their respective mini stories of hope and love. Though there are no A-list Korea superstars to be spotted here, Super Junior’s Choi Si-won has a cameo as Jin-ah’s nasty ex.

(No blues at all; just predictable fluffy romcom stuff) 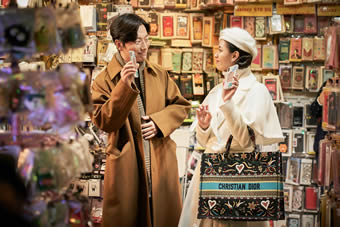 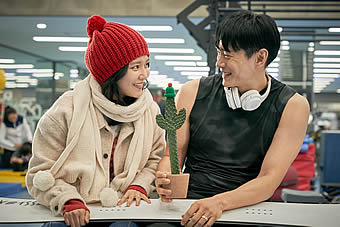