Synopsis: The Wishbones are far from being a happy family. Mum, Emma, owns a book store that’s deeply debt-ridden, Dad, Frank, is seriously over-worked and suffering under his tyrannical boss, daughter, Fay is a self-conscious teenager infatuated with her first high school crush, and genius son Max is being bullied at school. And it doesn’t end there - at a costume party an evil witch Baba Yaga turns them all into monsters! Emma becomes a vampire, Frank turns into Frankenstein’s monster, Fay into a mummy and Max into a werewolf. Together this monster family must chase the witch halfway around the globe to reverse the curse. During this haphazard adventure, the Wishbones get into trouble with some real-life monsters, not least the irresistibly, charming Count Dracula himself, who professes his undying love for Emma. Well, the road to family happiness is littered with pitfalls and sharp turns, or rather, sharp teeth...

A lonely Dracula (Jason Isaacs) is bent on freezing the sun until a mortal woman by the name of Emma Wishbone (Emily Watson) accidentally caught his attention and he tries to win her over by enlisting the help of a witch Baba Yaga (Catherine Tate) to turn Emma into a vampire.

However it’s not just Emma that is turned into a monster by Baba Yaga. By accident, her overworked husband, Frank (Nick Frost) is turned into dim-witted Frankenstein, her self-conscious teenage daughter, Fay (Jessica Brown Findlay) became an Egyptian Mummy and her son, Max (Ethan Rouse) is now a werewolf. To break the curse, the Wishbones must stay together as a happy family or stay forever as monsters.

This German-made, UK-voiced animation also know as Happy Family is helmed by Holger Tappe who brought you Animals United and he also produced the 2013 animated Tarzan. Never heard of Tappe or his productions? Holger and his stuff might not be household names in this part of the world but he tries his best to fill in the gaps between the releases from Pixar, Disney and DreamWorks. Holger’s latest animated feature is based on the novel of Emmy Award winning author David Safier even though the original work is meant for adults.

Perhaps it’s a classic case of lost in translation, there’s actually very little charm to the entire story. The well-meaning message of staying together as a family becomes stale and repetitive after a while and ultimately it’s a bore to sit through another session of shouting match between Emma and her headstrong daughter. That explains why you simply can’t wait for Dracula to reappear again in his crazy cool jet and zipping Emma off to his reimagined high-tech castle in Transylvania.

Despite having three rather wacky bats and their constant mischiefs, every other gag in the movie seems forced and flat that Holger has to resort to fart jokes courtesy of Frank every now and then. Still, the animation by the German-based Ambient Entertainment on the whole looks great. The New York setting is impressive though it’s puzzling why everyone speaks with an UK accent. The various locations including London, the vast desert and Dracula’s castle feature stellar design works by the animators.

Comparing this to Adam Sandler and Genndy Tartakovsky’s Hotel Transylvania franchise, it’s easy to spot which one will appeal to kids (and adults) more. The former is tightly paced, boasts plenty of silly fun while Happy Family somehow struggles very hard to hit the 90 minutes runtime mark. It does have its charm but not enough to justify for a full-priced ticket.

(Weak on laughs and there are better movies about dysfunctional families out there, definitely not the kind of movie to watch if you want to have a happy family) 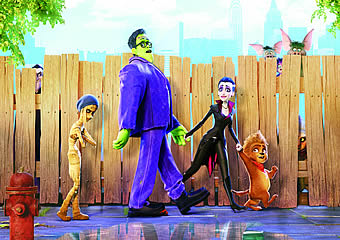 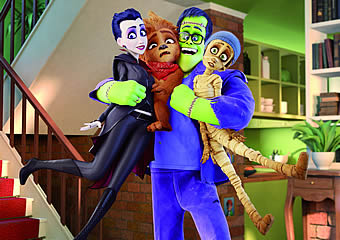 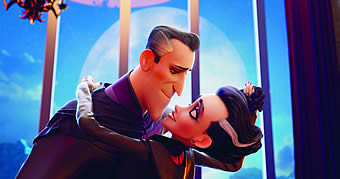 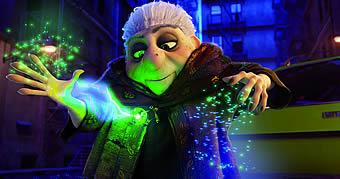