Synopsis: New York, 1971. Following his celebrated days as one of the most revered photojournalists of World War II, W. Eugene Smith (Johnny Depp) has become a recluse, disconnected from society and his career. But a secret commission from Life magazine editor Robert Hayes (Bill Nighy) sends him to the Japanese coastal city of Minamata, which has been ravaged by mercury poisoning; the result of decades of gross industrial negligence by the country’s Chisso Corporation. There, Smith immerses himself in the community, documenting their efforts to live with Minamata Disease and their passionate campaign to achieve recognition from Chisso and the Japanese government. Armed with only his trusted camera, Smith’s images from the toxic village give the disaster a heartbreaking human dimension, and his initial assignment turns into a life-changing experience. Based on the riveting true story, MINAMATA is a redemptive and emotional tale of triumph over adversity, and of how all of us have it within ourselves to make a difference.

You can’t blame us for expecting Johnny Depp to act weird and quirky in his performance as William Eugene Smith, an American photojournalist is known for his photo essay on the pollution which damaged the health of the residents of Minamata in Japan. After all, the actor is one of the most commercially successful movie star who has made a name for himself by playing eccentric characters like Willy Wonka, Sweeney Todd, Mad Hatter and of course, Jack Sparrow.

As we sat through the end credits of this drama directed by Andrew Levitas, we see that Depp is credited as a producer, suggesting that the film is a passion project that he feels strongly for. Based on the book of the same name, the well meaning movie sees Smith, a world weary photographer going to Japanto unmask the terrible aftermath of a huge scale industrial pollution which has led to mercury poisoning on the citizens of Minamata in Kumamoto, Japan.

Those who are familiar with the incident would know that those affected have suffered from a neurological condition known as Minamata disease. First discovered in 1956, the disease was caused by the release of methylmercury in the industrial wastewater from a chemical factory owned by the Chisso Corporation, which continued from 1932 to 1968. The results are devastating - signs and symptoms include muscle weakness, loss of peripheral vision, and damage to hearing and speech. In extreme cases, it may cause insanity, paralysis, coma, and ultimately, death.

The somberness of the issue is felt throughout the 115 minute movie. Depp delivers a grounded performance that is heavy hearted. For an investigation to expose corporate greed, you can expect his character to go through several obstacles, which allows the actor to display anger, grief and desperation. If you know how the real life incident progressed, you can also expect Depp to shine in moments of inspiration.

The film has an impressive Japanese cast which includes Hiroyuki Sanada and Tadanobu Asano (both actors appeared in 2021’s Mortal Kombat), as well as Jun Kunimura (The Wailing) and Ryo Kase (To the Ends of the Earth). It is a joy to hear these actors speak in their native language. Minami, a Japanese actress with French descent, takes on the role of Aileen, the woman who would eventually become Smith’s wife. The actress model has enough screen presence not to be overshadowed by Depp’s star power. Bill Nighy (also from The Pirates of the Caribbeanfranchise like Depp) has a supporting role of the magazine editor who sends Smith on the overseas assisgnment.

The film is cautious not to play up the western aspect of this real life story. There are many scenes which show how the events were unfolding in Minamata, and you can feel the anger, determination and despair from the various parties. However, we wish that the emotions can be more focused as the screenplay spends time fleeting from one side plot to another. The love story between Smith and Aileen is an example, and Smith’s friendship with a young boy is another. Perhaps an investigative documentary approach to the story might have worked better.

The film ends on a charged note, with the capturing of the famous portrait of a woman bathing her weak and bent limbed child in a traditional Japanese bath. It will make you find out more about the atrocities that happened. With a montage of other industrial pollution disasters around the world durng the end credits, you will want to take action against environmental change. 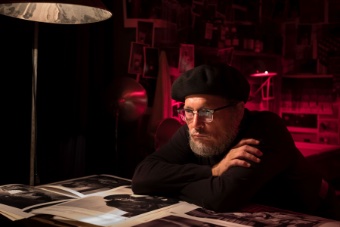 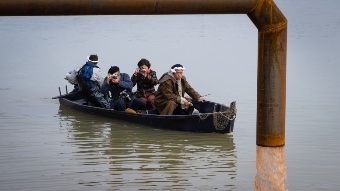