Synopsis: Based on the debut novel by Hunter S. Thompson, "The Rum Diary" tells the increasingly unhinged story of itinerant journalist Paul Kemp (Johnny Depp). Tiring of the noise and madness of New York and the crushing conventions of late Eisenhower-era America, Kemp travels to the pristine island of Puerto Rico to write for a local newspaper, The San Juan Star, run by downtrodden editor Lotterman (Richard Jenkins). Adopting the rum-soaked life of the island, Paul soon becomes obsessed with Chenault (Amber Heard), the wildly attractive Connecticut-born fiancée of Sanderson (Aaron Eckhart). Sanderson, a businessman involved in shady property development deals, is one of a growing number of American entrepreneurs who are determined to convert Puerto Rico into a capitalist paradise in service of the wealthy. When Kemp is recruited by Sanderson to write favorably about his latest unsavory scheme, the journalist is presented with a choice: to use his words for the corrupt businessmen's financial benefit, or use them to take the bastards down. .

Before Hunter S. Thompson went ‘gonzo’, he spent a number of years working at a sports publication in San Juan, Puerto Rico. It was there at the age of 22 in 1959 that he began writing a novel called ‘The Rum Diary’, loosely based on his own experience as a young newspaper man, which would go unpublished until 1998. The reason for that isn’t surprising for anyone who has read the book, or for that matter seen this adaptation by writer/ director Bruce Robinson- it is ultimately a story of excess, of alcohol and psychedelic drugs, of romantic affairs, and White supremism, written as if under the influence of one or the combination of these.

And it is clear that Robinson struggles with the source material, trying to give sufficient focus to a rambling story that never finds much meaning or significance. The lead character is one American journalist called Paul Kemp, played by Thompson’s long-time friend and champion Johnny Depp, who has grown tired of the conventional life under the Eisenhower era and decides to take a job at a local newspaper in San Juan known as the San Juan Star. It is an ailing newspaper- circulation is decreasing and the staff are either quitting or too inebriated to do their jobs well- so the cynical editor Lotterman (Richard Jenkins) tells Kemp to be content with doing tourist puff pieces and fake horoscopes.

Kemp makes the acquaintance of a slick PR man called Sanderson (Aaron Eckhart), who gives him a taste of the rich and wealthy by bringing him to his luxurious beachfront bungalow and inviting him to the high-end parties he hosts for business people. Sanderson also introduces him to his fiancé, Chenault (Amber Heard trying her darnest to look like Scarlett Johannson), whom Kemp immediately develops an attraction to. Of course, Sanderson’s affability isn’t without price- he wants Kemp to write favourably about his planned resort complex set to be built along some of the most pristine parts of Puerto Rico.

Suddenly, the freewheeling journalist is presented with an ethical dilemma- he can use his position to help his wealthy Western capitalist countrymen; or he can, in his own words, ‘take the bastards down’. It’s only apparent towards the end that Robinson wants to portray Kemp’s experience as a sort of awakening for him- or for that matter his alter-ego Thompson- from naiveté to perspicacity through a test of his journalistic ethics, and as you’ve probably guessed, there isn’t enough dramatic heft in the story to make his baptism of fire compelling.

In adapting Thompson’s book, Robinson displays less than necessary discipline in shaping the myriad storylines and characters, and as a result loses the core of the story to gratuitous detours. With two loons- the photographer Sala (Michael Rispoli) and another reporter Moburg (Giovanni Ribisi)- too much time is spent with Kemp whiling his time at local bars and engaging in all kinds of shenanigans including cockfights, car chases and courthouse visits. There’s also a wholly incongruous scene where Moburg offers Kemp and Sala an unnamed hallucinogenic drug which causes Kemp to watch in horror as Moburg’s tongue turns into a snake. Such are the excesses that mark Robinson’s film, and though one may argue that it fits with the tone of Kemp’s indulgences, the patchy script in turn means that the film is often meandering and unfocused.

That it still manages to hold your attention is thanks to Johnny Depp who tempers his usual eccentric performance with restraint, and his portrayal of the pre-gonzo Thompson is comical but never over-the-top. Depp is watchable as always, but not even his presence can distract you from the fact that the film doesn’t quite know where it wants to go. To enlist him and his director on their diversionary mission however, Depp has brought along his ‘Pirates of the Caribbean’ lenser Dariusz Wolski and the latter does an excellent job photographing the Puerto Rico locations.

As a promotional video for the country’s beautiful beaches and deep blue sea, ‘The Rum Diary’ succeeds impeccably. But anyone looking for any form of insight into the ‘gonzo’ journalist Thompson’s transformation should look elsewhere, because Robinson’s film is all polished veneer and little substance. It’s no wonder then that this film ended up sitting on the studio shelves for three years- it isn’t ‘Fear and Loathing’ enough crazy, nor insightful enough as a biopic of the infamous Thompson. Just because its protagonist’s journey was one rum-soaked experience doesn’t mean it needs to do likewise when recounting it- and this similarly inebriated account makes that mistake of lacking clarity and purpose.

(As unfocused as its protagonist’s aimlessness, this tale of the ‘pre-gonzo’ Thompson is pleasurable diversion- just don’t expect much insight or purpose) 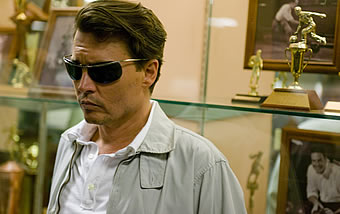 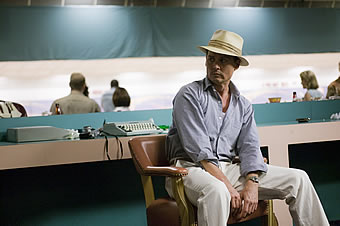 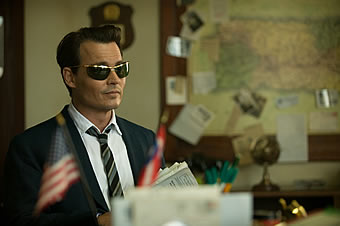 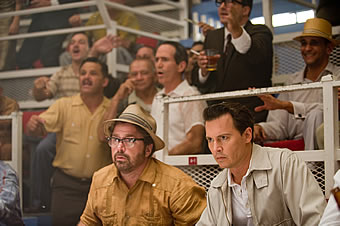 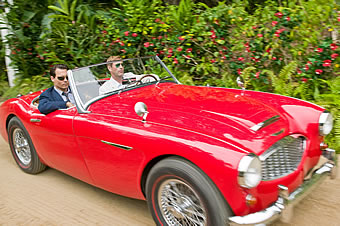 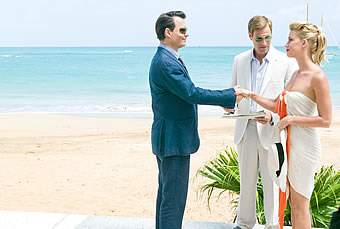