Synopsis: Separated from her fiancé after sneaking onto a restricted slope, Mia, a free riding snowboarder, must survive not only against nature, but the masked snowmobile rider in black who’s out for her blood.

At just 87 minutes, you would expect a thriller like ‘Let It Snow’ to be tight and fast-paced. Alas, this effort from Ukrainian director Stanislav Kapralov fails to be either, leaving you wanting for its entire duration for something more exciting.

The premise is simple – separated from her fiancé Max (Alex Hafner) after sneaking onto a restricted slope, a free-riding snowboarder Mia (Ivanna Sakhno) must survive against nature as well as a masked snowmobile rider in black out for her blood. Indeed, it is a survivalist thriller with a female protagonist at its centre, but what follows is unexpectedly dull.

Neither Kapralov or his co-writer Omri Rose fail to grasp what it takes to build a compelling lead, squandering the first act with unnecessarily extended scenes of Mia and Max spending intimate time with each other; worse still, the later two acts are punctuated with numerous flashback scenes of essentially the same takeaway, i.e. that they were on the verge of getting married and had hoped to have kids together someday.

For another, neither Kapralov or Rose understand how to build meaningful suspense in the narrative. Than build a tense cat-and-mouse chase around the magnificent snow-capped slopes of the Georgian mountains, they have the killer disappear inexplicably for large stretches of the movie, prompting us to wonder if he is in fact interested in getting her or not. That unfortunately leaves too much time with extended sequences of a frostbitten Mia trudging through thick snow, without much to do except look weak and helpless.

As much as Sakhno tries to garner interest and empathy for Mia’s predicament, there is only so much she can muster with a thinly written character and storyline. Without giving anything away for those still willing to brave one and a half hours in the snow, let’s just say the post end-credits twist should in fact have been part of the main story in the first place, in order to move the plotting forward.

And then there is the killer himself, who is given some backstory about loss, grief and vengeance. As intriguing as that may be, it doesn’t build to anything substantial during the course of the movie, and ironically only becomes interesting with the post end-credits twist that we said earlier should have been incorporated into the movie. There is little real menace here, which only makes the proceedings even more of a trudge.

All in all, ‘Let It Snow’ is a culmination of missed opportunities through and through. There is real promise for this to be a tense and exciting hunter-and-hunted thriller, but that potential never ever materialises itself. Unless you think you’ll get some visceral pleasure out of seeing the beautiful on-location scenery for that winter holiday you won’t be able to go this year because of the COVID-19 pandemic, you’re better off letting this one slide you by.

(Slow, plodding and dull, this Ukrainian thriller squanders a promising female survivalist premise with a story that goes nowhere) 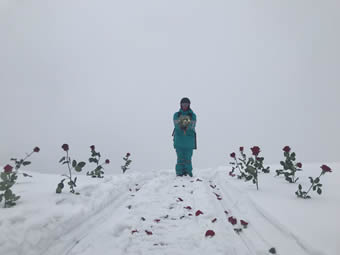 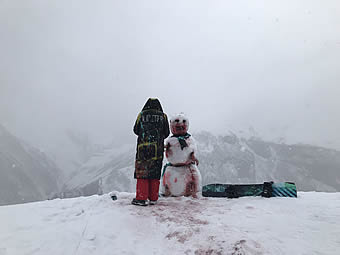