Synopsis: In acclaimed director Edgar Wright's psychological thriller, Eloise, an aspiring fashion designer, is mysteriously able to enter the 1960s where she encounters a dazzling wannabe singer, Sandie. But the glamour is not all it appears to be and the dreams of the past start to crack and splinter into something far darker.

If you’ve seen the trailer, you’ll know Last Night in Soho is lavish in its visuals, draping vivid colours of neon red and blue against the alternate universes it sets itself in. The saturated treatment recalls titles such as The Neon Demon, except this is applied more to England than America, and as much in modern-day London as it was in the swinging 60s. These bold swathes do feel odd at times, but mostly bring us into a hyper-reality that’s as trippy as it is spooky.

In this psychological/supernatural piece, Eloise “Ellie” Turner (Thomasin McKenzie) moves to London to chase her aspirations of becoming a fashion designer. She’s immediately at odds with the city - her a mousey if sprightly figure soaked in her love of the 60s, a legacy left by her grandmother taking care of her, while most of her classmates (including a very annoying queen bee Jocasta acted by Synnove Karlsen) are your typical competitive wannabes dropping names and humble bragging.

After constant harassment in her dorm, she finds herself a cheap unit to rent from an enigmatic landlady, Ms Collins (Diana Rigg). From there, she soon regains some normalcy in her routine - including seeing her late mum in the mirror. That’s right - our protagonist has somewhat peculiar occasional episodes where she is assured by maternal appearances in reflective surfaces. Her grandmother seems to be aware of this phenomena, and constantly checks (sometimes ad nauseum) through the phone to see if Ellie’s coping. We can’t establish if this is something more mental or supernatural but the appearance of another character soon suggests it might be the latter.

Ellie finds herself spirited away every night in her room to the 60s, almost as if the space at night becomes a time-travelling portal for her. In the episodes, she starts seeing herself layered over another young lady in the mirror - an equally winsome if more self-assured lady named Sandie (Anya Taylor-Joy). The coquettish surrogate is an aspirant like Ellie, but unlike the fashion designer, is more inclined in the performing arts, seeing herself as a rising songstress. Sandie meets Jack (Matt Smith), presumably an artiste manager, but turns out instead to be more of a pimp. It all starts turning chilling when their warped relationship turns deadly.

Forefront to director Edgar Wright’s piece is a commentary on toxic patriarchal systems, where female objectification is a means to an end. And for the modern-day Ellie, she tries desperately to change the course of events, unaware if she’s making an impact on real characters or just a fantasy. This gets revealed with the introduction of new characters, and the development of Last Night in Soho becomes concrete when Ellie has solid leads, but somehow through the layering of dimensions, the story starts to become choppy with her psychological state.

Chung-hoon Chung’s photography helps a lot to keep this dizzying spiral pretty but even that is not enough to sustain the unravelling later on in the film. It’s sometimes the sharp writing that peeks through (for example in one scene when Ellie asks her pub boss if she believes in spirits, the Irish lady retorts that they pay for her bills, referencing the bottled variety) that keeps the story going, but figures such as Ellie’s love interest, John (Michael Ajao) is awkwardly inserted as measures to provide tension.

The other point of entertainment has to be the killer soundtrack. It’s lyric-relevant and nostalgic, with entries by Dusty Springfield (Wishin’ and Hopin’) to Cilla Black (You’re My World). New arrangements give the film its necessary edge, and this works beautifully when Taylor-Joy even comes in to sing two tracks (that girl is truly a flawless multi-hyphenate). Even if it makes the film a little like an extended music video at parts, the effect certainly bolsters the thriller that lost its impact towards the end.

(A thriller that trips over itself at the end, but sends one on a beautiful and trippy visit to the swinging 60s with gusto) 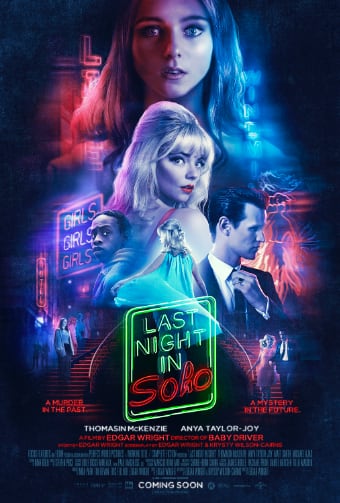