Synopsis: A story about healing and the transcendent power of human kindness, Land follows the journey of a woman searching for a new way to live in the wake of a life - altering loss. Edee Holzer (Robin Wright) removes herself from society to embark on a solitary existence in the remote mountain wilderness of Wyoming. Living off the grid without no prior wilderness experience, Edee is buffeted by the elements and unprepared for nature’s formidable realities. She struggles mightily against odds that grow steeper by the day, but a timely encounter with a local man, Miguel Borras (Demián Bic hir), opens the door to deeper understanding of nature as he teaches her the skills she needs to survive. An unexpected friendship develops between two wounded souls, and a bond that confers healing and grace.

Even though she’s directed a couple of episodes of ‘House of Cards’, it’s surprising to see how confident a director Robin Wright is in her feature debut. Directing herself in the title role, ‘Land’ sees the actress commit herself wholeheartedly to the tale of a grieving woman who seeks solace by going off the grid to live in a remote Wyoming cabin in the mountains.

At least initially, Wright chooses to reveal little about what had happened to Edee; all we know is that she had probably suffered some deep personal trauma, as evinced by snippets of her therapy session in a darkened office and a heated exchange between her and her friend Emma (Kim Dickens). Lest you think that it is all but a ploy to build suspense, we can assure you that it is not; instead, Wright chooses not to overplay the obvious tragedy, so as to focus the attention on her process of grief and subsequent reconciliation.

Edee’s journey to find solitude ends in a neglected hunting cabin on a parcel of land at the top of a long dirt road, and for much of the first and second act, ‘Land’ is pretty much a solo show that sees Edee struggle to come to terms with the harsh elements of nature. It is sobering to say the least, what with Edee learning to cope with wolves at night, a bear that ransacks the cabin in broad daylight and basic supplies of food and fuel for the harsh winter. Wright throws herself completely into the role, which allows her in her capacity as director to capture Edee’s vulnerabilities with raw intimacy.

Try though she does, Edee is ill-prepared for the harsh winter, and is ultimately rescued from death’s door by the hunter Miguel (Demian Bichir). With help from his sister, a nurse, Miguel nurses her back to health. When she is better, Miguel offers to teach Edee to trap, hunt and survive in the wilderness. Don’t be tempted though to simply think that Edee will find new company in life with Miguel; those who are familiar with Wright’s oeuvre will know that she is hardly a romantic actress, and she is therefore hardly likely to turn this into some sort of romance drama.

Yet it is also true that Edee and Miguel will forge a connection, one that we’d describe as both heartfelt and poetic. “Why are you helping me?” Edee asks. “You were in my path,” he says. It is befitting that we should discover the extent of Edee’s heartbreak as the friendship between these two wounded yet resilient souls develops, and it is to the credit of both Wright and Bichir that they manage with the barest of words exchanged to develop such a profound and resounding bond with each other.

Though it is somewhat inevitable that ‘Land’ will be overshadowed by ‘Nomadland’, this quiet and beautiful film deserves its own audience. With utmost restraint and nuance, Wright delivers a elegiac picture about how grief can threaten to overwhelm one’s existence, and how in such circumstances it may do well to simply rediscover what it means to be alive and living. Of note too is the breathtaking Atlanta locations against which cinematographer Bobby Bukowski has shot the movie, that add to the intensity and immediacy of Edee’s environment. And with ‘Land, Wright establishes herself as a filmmaker in her own right, one who knows and understands what poignancy without artifice means.

(Elegiac, understated yet deeply poignant, 'Land' is a beautiful solo show by Robin Wright whether as actor or director) 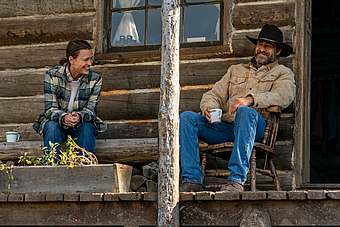