Synopsis: When Paris is submerged in a strange mortal fog, survivors take refuge on the city’s upper floors and rooftops. Without news, electricity, water or food, one small family struggles to survive the catastrophe. But as the hours pass, they are forced to face reality: rescue teams aren’t coming. If they hope to make it out alive, they will have to risk going out into the fog.

This movie is believed to the first French disaster film ever made, and we were expecting a big budget production with massive special effects showcasing the talent of genius CG artists, spectacular sets with collapsing buildings and helpless human beings running for their lives, as well as a painfully predictable storyline.

We are pleasantly surprised that it is not the case. Luckily for viewers, the movie which opened the French Film Festival this year upholds the reputation of European productions: films from that part of the world display more class and thought process. Yup, we are pleased to report that you won’t be getting Michael Bay or Roland Emmerich treatment.

The story sees Mathieu (the very charming Roman Duris) coming home to Paris from Canada, where he was sourcing for a cure for his daughter who is suffering from an immunodeficiency disorder that requires her to live in a technologically advanced plastic bubble. When a mysterious mist consumes Parisfrom underground, his daughter ironically becomes the safest person in the country. Together with Anna (the very gusty Olga Kurylenko), Mathieu has to find a way to stay alive with the mist rising up the buildings while figuring out how to retrieve the young girl.

Unlike most other disaster movies we are familiar with, this film directed by Daniel Roby chooses to focus on the dynamics between the characters instead of throwing one CG laden scene at audiences after another. There is only one big scale sequence of clouds of brown fog emerging from the ground early in the film, and the plot follows the two adult protagonists fighting for their survival thereafter. This is definitely nothing like The Day After Tomorrow (2004), 2012 (2009) and Independence Day: Resurgence (2016).

We are not suggesting that it is a dreary small scale film which isn’t worthy of a big screen treatment. There are some compelling scenes which see the characters trying to escape the deadly toxic cloud that keep you at the edge of your seats. This is only possible because you care about Mathieu and Anna, a result of good characterisation. To add to the human drama, there is an old couple who may remind you of your ageing parents. Their eventual fate may move you to tears.

Duris (All the Money in the World) delivers a fine performance as a caring father who is determined to make things work, no matter the cost. Kurylenko (Johnny English Strikes Again) holds her own ground as a woman who will not allow obstacles to stand in her way of survival and saving a loved one.

The 89 minute runtime also means that the film is tightly edited. Without giving too much away, the movie has a cleverly designed ending that will make you reflect on the essence of human existence. Some may see this film as a wake up call to the urban city’s increasing pollution, while others may simply regard it as a human drama with gripping emotions. Whatever the case, it is a refreshing change from the usual disaster flicks that do nothing more than deafen or numb your senses. 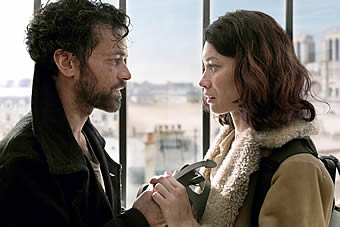