Synopsis: During WWII, JoJo Betzler (Roman Griffin Davis), an awkward 10-year-old boy, lives in Germany with his single mother, Rosie (Scarlett Johansson). As members of the Hitler Youth, Jojo and his friends have to learn war games and how to blow things up, but the kids aren't that adept and manage to stab themselves with the knives they're given and blow up buildings that are not meant to be blown up. When Jojo is asked to kill a rabbit but can't bring himself to do it, he earns himself the nickname "Jojo Rabbit." Discouraged, Jojo seeks solace in his imaginary friend, Adolf Hitler (Taika Waititi), who does his best to encourage the boy, while telling him stories of his own awkward youth. Meanwhile, Jojo discovers that his mother is hiding Elsa Korr (Thomasin McKenzie), a teenage Jewish girl, in their home. Jojo doesn't know any Jews, but has heard they have horns and scales and hang from the rafters like bats. He decides not to tell the authorities, because he knows that would put his mother in danger, so instead he tries to find out all he can about Elsa, in order to gather information about Jews for the Nazis. As he does so, he has to endure Elsa's teasing, who makes quips such as, "Obviously we are demons who love money."

In today’s era of instant media and trigger-happy sensibilities, presenting a film about Nazis and their famed chancellor is like a game of dice… with razor blades. Fortunately under Taika Waititi’s treatment, Jojo Rabbit doesn’t draw blood, but instead, a mixture of laughs, shock, or indignance.

How you enjoy this film might be an indicator of where you sit in the subject matter spectrum. Given that most of our generation didn’t experience World War II, the laughs will come a bit more comfortably, from the antics of characters like Fraulein Rahm (Rebel Wilson at her usual, but with a hilarious butchered accent) to the madcap training in the Nazi Youth Camp. Indeed, the Fuhrer’s evil becomes but only a whiff, drowned out by the silliness of commanders more interested in dressing up, or an imaginary representation (played none other by Waititi himself) that spouts erratic solutions like a pinball machine.

Those who know their history a little better, will appreciate other references that gives an easter-egg layer of emotions. For example, the character Elsa (no, not that one) played delightfully by Tomasin McKenzie, easily echoes Anne Frank - and so adds an extra sting to those in the know. Or also, the queer tension between Captain Klenzendorf (Sam Rockwell) and Finkel (Alfie Allen), along with several scenes between the imagined war leader and little boys, is no doubt a nod to his suspected homosexuality.

So in short, everyone will come out of Jojo Rabbit with something a little different, and given that the topic is so controversial, a post-movie discussion should make for a very interesting evening. But one thing’s for sure, this is less so a piece on the atrocity of the Third Reich, but more a coming-of-age scenario put to the ultimate test, with absurd circumstances and extreme moral floundering.

We parachute in to the tail end of the war. Our titular character is Jojo Betzler (Roman Griffin Davis), who is excited to go to Youth Camp and be part of the Fuhrer’s personal army. A side accident - thanks to his imagined Hitler sidekick - leaves him with facial scars and a limp, and also a banal job as an office errand boy.

Things take a turn when he discovers a Jewish girl living in his sister’s room. Who hid her there? Why is she not scared of him? The answers seem to point at the impossible - his mother Rosie (Scarlett Johansson). Feeling betrayed but mostly confused, he works out his loyalties by extracting information from the girl, on account of documenting facts to help with theories about Germans being the supreme race. Needless to say, he is proven very wrong at the end.

Waititi’s farce has a wavering path. While mostly a comedy, it shuttles between different moods, and at times ineffectively. The initial campy OTT scenarios at the training grounds quickly disappears when the boy becomes injured, only returning in jolts when Captain Klen and his friends reappear. And so, Jojo Rabbit’s tone is dictated by the characters Jojo are interacting with, and as amazing as Davis is, he is not enough an engine to hold the core. That said, the kid is ADORABLE. He has a timid snarkiness that is more endearing than annoying, and his good heart never lets us see him as anything but a misguided and earnest child wanting validation from his idols - the adults.

Equally charming is his campmate Yorki (Archie Yates). One can feel the mood shift in the cinema every time the chubby kid appears, with tumbles of laughter as he spouts his many life-weary findings. Emerging from a battlefield, the boy just casually claims, “I guess I’m just one of those that just can’t die.” Hi-la-rious.

Jojo Rabbit is very much needed in this time and age. When the world is at its most connected and informed, and yet chaotic and sensitive as well. Waititi wants us to remember, sometimes, we just need to sit down and just laugh all our differences away.

(Full of punch at the start, Waititi’s film wavers throughout, but the brightest bits far outshine the awkward sappiness, and keeps things heartfelt and funny) 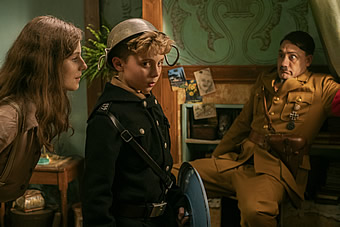 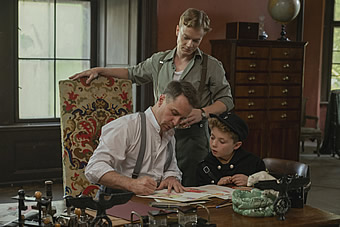