Synopsis: TRAVEL - Bobo (Chrissie Chau) was killed in a car accident when she travelled to Thailand.

At Bobo’s funeral, Cherryl (Jacquelin Ch’ng), Mindy (Rose Chan), Mon (Charmaine Fong)and Harriet (Harriet Yeung) who were in the same Thailand tour, came to bid farewell to Bobo. As Bobo was an orphan, there were not a lot of visitors, Cherryl and the three others were almost the only ones. While chitchatting, they talked about Bobo’s boyfriend. They remembered Bobo had a big quarrel over the phone with her boyfriend, she even threatened to kill herself.  They also suspected Bobo was pregnant, as she vomited all over while having hot pot with them in Thailand.

Meanwhile, a good-looking young man came tothe funeral. He looked very sad, he was Karl, Bobo’s boyfriend.  He stayed till the end of the funeral, as if he was reluctant to part with Bobo.  With sympathy, the four girls invited Karl to dine with them.

At the dinner, Karl told everyone that he just came back from Hawai ithough he was in his winterclothes.  He looked very pale and he did not want to eat at all. He wanted to know everything about Bobo in her Thailand trip and whether she had left anything or words for him.  The girls remembered they had seen a photo of Bobo, Karl and another woman, Phoenix (Stephy Tang). Harriet was curious about the relationship of the three, but she did not get any answer, she was stabbed to death by Karl.  Cherryl, Mon and Mindy were killed by the poisoned hot pot as well, also done by Karl.

Why did Karl kill everybody? Who is Phoenix? What has happened in Thailand?

CLASSROOM - Teacher Jennifer (Jennifer Tse) got a substitute job at a high school in the suburbs.  The first day on the job, she hadbeen assigned to teach the class of Form 4E. The students were really mischievous, except for Don Don (Kimmy Tong) who was relatively quiet, always keptto herself, but befriended Jennifer.

Back at home, while sharing with her parents about the funny incidents at school, Jennifer received an urgent phone call from her ex-boyfriend, Chung (Chau Pak Ho) who begged her to get back together.  Chung had a tendency of violence, and when he tried to hit Jennifer for the third time, she firmly decidedto break up with him.

After a short while at work, Jennifer found the students in her class behaving strangely, with the girls always wearing heavy makeup and dressed provocatively, which led her to suspect that they were working as part-time call-girls. Jennifer tried to talk them out of their “part-time jobs”, but was warned by the gangnot to be too nosy instead.

Jennifer returned to school to talk to the Principal and the Student Officer, Miss Kong (Kristal Tin) about the problems she found with her Class, but Kong reacted with surprise as there was no such class as 4E in the school. Jennifer was astounded, they tried but failed to find the class, Jennifer started to get really scared.

Returning home with fear, Jennifer told Chung of her predicament.  Chung then brought Jennifer to meet with Master Wan to seek his advice.  The Master gaveJennifer a golden talisman to protect herself.  With the talisman, Jennifer slept really well and undisturbed.  When she woke up, she received her mother’s call, saying that she was waiting for her at the school with Class 4E students.

The frightened Jennifer hurried to the school, and saw her pupils’ faces changing, gradually transforming to ghostly beings, Jennifer then pulled out the golden talisman to fight against them... When the police arrived, Jennifer had already killed all her students.  Shewas totally collapsed and kept mumbling to herself that her whole class of 4E was ghosts.

Does Class 4E really exist?  Are they really the ghostly spirits?  Who actually is the ghost?

It’s true- as the movie’s poster states, there hasn’t been a horror movie from Hong Kong in a while. Nonetheless, this dual effort from directors Wong Jing and Patrick Kong to revitalise the genre is only a half-hearted one- and we mean that literally, as this anthology of two horror stories ‘Travel’ and ‘Classroom’ from Kong and Wong respectively is only half-good.

The better half is surprisingly Patrick Kong’s ‘Travel’, the story of four friends and their encounter with their recently deceased travel companion Bobo’s (Chrissie Chau) lover Karl (Him Law) at her funeral. The storytelling is notably Kong's, and those familiar with his frequent musings on love in ‘L for Love, L for Lies’, ‘Marriage with a Liar’ and ‘Love is the Only Answer’ will certainly recognise his oft-used techniques of perspective and flashbacks.

The latter is used recurrently to cut between their fawning over Karl at Bobo’s funeral and their nature of their acquaintance with Bobo during a trip to Thailand. Kong’s scriptwriting here is sharp and satirical, taking frequent jabs at recent Hong Kong celebrity gossip (mostly around TVB actor Raymond Lam) as well as the perennial rivalry between local television stations ATV and TVB. Understandably, these jokes will be lost on those unfamiliar with the local entertainment scene in Hong Kong, but they are witty and entertaining for the initiated.

Kong is also well-served by an energetic quartet in Charmaine Fong, Jacqeuline Chong, Harriet Yeung and Rose Chan, all of whom play Bobo’s travel buddies. Their outright flirtings with a handsome cop Jack (Timmy Hung) on the same tour, as well as their quick and spirited delivery of Kong’s dialogue, are hilarious. They also share great chemistry with one another, especially when bouncing lines off each other. Next to them however, Kong regulars Chrissie and Him pale in comparison, partly also because the nature of their roles afford less room for mirth.

Keeping with genre conventions, Kong injects a twist at the end, which plays deftly with his favourite practice of having multiple perspectives. Here, the story told from Bobo’s point of view reveals much more, and wraps up the mystery nicely. As for the horror, well there is admittedly little that is scary, and what passes for it is merely a nice sense of intrigue. Still, Kong is forgiven for creating a well-paced and unexpectedly entertaining piece of cinema.

The same however cannot be said of Wong Jing’s own ‘Classroom’. Working off a threadbare story of a substitute teacher Miss Yip (Jennifer Tse) whose class of unruly students may or may not be ghosts, Jing seems to be genuinely uninspired to deliver a compelling story or any solid thrills. Instead, his short lurches unevenly between various unconvincing characters such as an abusive ex-boyfriend Chung (Pakho Chow), a quiet loner Don-Don (Kimmy Tong) and (lo-and-behold) a Christian minister who tells Yip to ‘put her faith in God’.

Assembled in slipdash fashion, the sloppiness shouldn’t be a surprise to those who have followed Wong Jing’s numerous works through the years- but while this may not be his worst, there is practically nothing redeeming about it. His feeble attempts at horror consists of bad makeup, moving toilet doors, and flying exhaust blades- none of which passes for anything other than cheesy. Even the twist at the end comes off perfunctory, and horror aficionados should have no problem guessing it from a mile away.

Given the disparity in quality between the two, it probably would have been better for Wong Jing to have just left the film up to Patrick Kong, instead of personally taking a stab at a genre that he has little flair for. It also stands to reason that the inspired prologue that sees a bunch of paper dolls coming to life in a funeral parlour and slating the opening of either story probably came from Kong.

So like we said at the start, this latest stab at breathing life into a now-dormant genre in Hong Kong cinema is only half-successful. Watch it only if you’re nostalgic for the campy horror films of yesteryear- otherwise, those looking for any real chills will probably find the air-conditioning in the cinema hall more expedient. 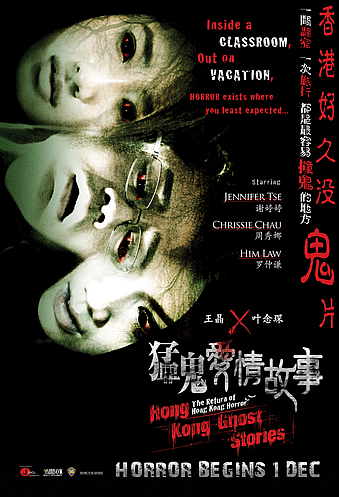