Synopsis: A story that follows a family of four leading harmonious and contented lives. When a mysterious visitor starts residing in their basement, their lives are turned upside down as strange events begin to occur.

If too many cooks spoil the broth, then too much emphasis dulled this film.

The trailer for Home Sweet Home has allusions to an epic noir - a suspense thriller centred around a wealthy family, unravelling at the introduction of a stranger in their basement (which sounds eerily similar to another Korean title that won an Oscar in 2019).

But this production is clearly overworked, eventually becoming even tiresome to watch, feeling very much like a person wringing out a dry towel. At one point, thinking that the movie was nearing its end given how slow it felt, I glanced down at my watch notification and was horrified to learn I was only past the halfway one-hour mark.

Leste Chan has had some success in suspense with previous efforts The Great Hypnotist (2014) and Battle of Memories (2017); and in fact Home Sweet Home echoes these titles with its theme on amnesia, but this clearly is the weakest of the lot, tripping over itself in an effort to impress with its grandiose veneer.

If this movie buried itself, it was with spades of its own unnecessary drama. You know that self-important friend who always creates a mountain out of a molehill? This is the film version of it.

It’s the overuse of exaggerated sound effects. The melodramatic score that refuses to let up. The repeated lingering frames on the photos in the house, or facial closeups. A script that felt so manipulative, it’s - once again - the friend that says “I’ve got a secret but I’d better not say anything”. Like… we get it. Everyone in this family has a secret. But after a lot of emotional guilt-tripping and motivational obfuscation, one starts to resign oneself to the final reveal after the first 30 minutes. But Home Sweet Home doesn’t let up, continuing to campaign you with the same spiel for the next hour.

It’s partially Chan’s fault in making the characters stoic to the point of being dead. The haunted faces become really annoying, really fast. Yes, we get that wealthy people sometimes go to extremes to keep up a facade, but when you make that fact obvious within the first 10 minutes, you have to offer more beyond that.

We see the return of actors from previous films - Duan Yihong as the cellar “stranger” and Hsu Weining as the mother - but it seems even the director’s working experience with them doesn’t translate in this film. As Kunqiao, Duan’s guilt comes and goes much too easily. Hsu as Mrs Wong, is as cardboard as they come, which makes her fits of insanity abrupt and illogical.

While Aaron Kwok as the father is pitched as the obvious protagonist, Home Sweet Home soon loses his captainship when all the members become as unlikeable as him. I’m really not entirely sure who to root for or what to feel when the truth is revealed - that itself an unbelievably wrapup that will have one questioning the point of this film.

It goes for philosophy - how wealth corrupts happiness, how guilt tears one apart, maybe even a probe as to what makes a family, a family. But you won’t find the material here provoking, cathartic or insightful. It’s just really, really annoying.

(Ambition and gloss fail to do this film any favour, as a manipulative production makes everything overworked and tiresome to watch) 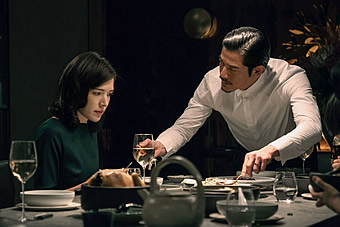