Making its world premiere at last year’s New York Asian Film Festival, our local hyphenate Mark Lee’s sophomore full-length directorial effort (his first was Make It Big Big with his FM972 gang) is a mish-mash of horror, comedy and romance. A very decent effort we must add despite a rather crappish looking trailer.

As premises go, Hell Bank Presents: Running Ghost offers a tongue-in-cheek look at “modern-day” hell. Instead of burning flames all around and guarded by Ox-Head and Horse-Face, Hell is now a high-tech, cosmopolitan looking place run mostly by General Bull (Jerry Lamb) and features its own variety show called Running Ghost. The winner at the end of the day will get the chance to be reincarnated if he or she managed to win all three rounds. First, to successfully scare a human. Two, to possess one and the final round, to kill one.

Recently deceased cable guy Wang Hiu-kwai (Wong You-Nam) is thrown into the mix as an unwilling contestant. A slacker when he was still alive, Kwai has no ambitions and drive, his only passion is his love for his childhood friend, Bo Yee (Venus Wong). With the help of a ghost enthusiast Ling Kay (Cecilia So) who has a condition to help Gui by the way and fellow ghost buddy, Chong (Zeno Koo), Kwai manages to proceed to the next round. But is the love of Bo Yee alone enough to convince Kwai to carry on his mission and fulfill his “unfinished business” on earth?

To be fair, our three main protagonists each has a passable backstory to tell. Kwai is an orphan and because of his so-called love for Bo Yee, he wants to return to earth to protect her from her no-good, property agent boyfriend. As for Ling Kay, she is guilt-ridden for indirectly causing the death of her father and all she wants is a spirit who can contact the soul of her deceased father to see if he had forgiven her for the incident. Chong on the other hand has to relive his death all over and suffers torture at the self-help kiosks located on the 18th level of hell every night as a punishment for taking his own life.

With the exception of the opening, the story spends too little time on the variety show setting unfortunately. Little is developed on how the actual games worked. Maybe it works liked Running Man, can’t vouch on that though. Instead, there’s frequent play on words and we are sure you are going to giggle a little next time you see the signages of JP Morgan and Starbucks. Local renowned marketplace app Carousell makes a big product placement of all places, in Hell. Equally ineffective is there’s very little focus on Kwai’s fellow contestants which ironically featured an undeveloped super powerful baddie resulting in the lost of an opportunity to showcase some in need mayhem.

Hell Bank Presents: Running Ghost is seemingly focused on Kwai’s character, from a wimpy new ghost to one that actually saved the day. At least he gets a solid development which is probably the whole point of this movie. Although very much predictable and conventional, there’s a lot of heart and emotion invested in his story arc making it more of a romance horror than a straight out laugh fest. Truth be told, there’s only one particular scene that took place in a haunted flat unit that will have you chuckle out loud, the rest are plain mediocracy jabs or simply lost in translation.

On the whole, the CGI and makeup effects are fine. The movie which is shot entirely in Hong Kong and featured a slew of local cast is authentic and effective. Same goes to the camerawork and editing. The sparse sets however is a major letdown, quite an obvious embarrassment matter of fact. We can’t really say Hell Bank Presents is particularly noteworthy. But given more time, budget and effort, Golden Horse award nominee Mark Lee has the potential to surpass his mentor, Jack Neo anytime. 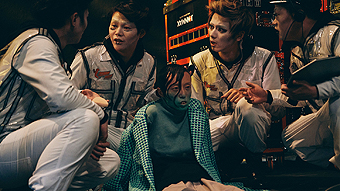