Synopsis: Based on the internationally-acclaimed sci-fi property, “GHOST IN THE SHELL” follows the Major, a special ops, one-of-a-kind human-cyborg hybrid, who leads the elite task force Section 9. Devoted to stopping the most dangerous criminals and extremists, Section 9 is faced with an enemy whose singular goal is to wipe out Hanka Robotic’s advancements in cyber technology.

For Beauty and the Beast and Power Rangers, it was the inclusion of a LGBT (lesbian, gay, bisexual, and transgender) character. For the American adaptation of the popular Japanese mange Ghost in the Shell, it was whitewashing. We are pretty sure such controversies help boost the box office figures of the movies, so why not?

If you do not already know, netizens flew into a rage when Scarlett Johansson was cast in the lead role. It did not help that there were reports saying that and other visual effects were used to alter Johansson's appearance in order to make her appear Asian. While the original was a Japanese cult manga and ground breaking anime which featured Hong Konginspired locations and an Eastern philosophy based story, people could not understand why there was a need to have a Hollywoodbig screen adaptation.

Well, it’s for business of course – you can bet audiences are still going to lap this up and flock to the theatres to check out Johansson’s performance and ahem, assets. It was PR done right when the studios released a video of the director of the original films, Mamoru Oshii talking about how Johansson has exceeded his expectations for the role.

For those who aren’t aware of what the franchise is about, the story is set in a world where computer technology has advanced to the point that many members of the public possess cyberbrains (it sounds complicated, but it simply just means that while lives can be retained, people are also capable of doing terrible, terrible things with the advent of technology). The protagonist is Major Motoko Kusanagi, a cyborg who had an accident, resulting in the use of a full body prosthesis to house her cyberbrain. She works for a task force to combat criminals, hackers and terrorists.

The filmmakers probably weren’t expecting to please all the fans of the original (the franchise included manga publications, animated films and television series), but it does a decent job of capturing the visually arresting environment of the classic source material. One can only imagine how immersive the viewing experience would be in 3D. There are creepy and robotic geishas that serve the elite but seem like they could lash out at any given moment. The cityscape is futuristic, grubby, and a bustling dystopia at the same time (an obvious nod to Ridley Scott’s Blade Runner). You feel the vastness of the city, hear the noise on the crowded streets, shudder at the coldness of the machine controlled labs and sympathise with Major when she wakes up in her sparse, lonely and dimly lit apartment.

The cast does a commendable job portraying the characters as well. Johansson, who sent shivers down our spine with her performance as an alien woman who preys on man in 2013’s Under the Skin, does look the part in her latest movie. Her seemingly blank gaze incorporates a sense of fear, wanting and hope – which is a spot on characteristic for Major. Takeshi Kitano effortlessly plays her boss Chief Daisuke Aramaki (you won’t argue why he is the only character who speaks in Japanese, and the rest of the characters understand him – simply because he is Takeshi Kitano). Danish actor Pilou Asbæk and Singapore’s Chin Han play Major’s compatriots, Michael Pitt is an angst ridden cyborg and the respected Juliette Binoche takes on the role of a compassionate and motherly cyborg creator.

Does this movie directed by Rupert Sanders (Snow White and the Huntsman) capture the wonder and magic of the source material? Probably not, but it is still a visual spectacle worth your time. 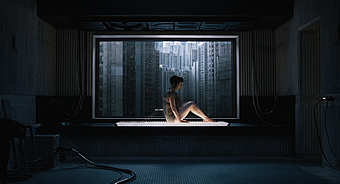