Synopsis: Con man (Kenny Lin) pairs up with a beautiful gunfighter (Zhang Jingchu) to stop the Japanese military from stealing a Chinese national treasure. Along their quest, they cross paths with a couple (Tengger and Liu Xiaoqing) who turn out to be infamous treasure thieves. Together, the four form an unlikely alliance and race against time in search for the coveted national treasure.

For a few bucks, you might probably be entertained by this nonsensical flick directed and written by Pan Anzi and stars the up-and-coming Kenny Lin Gengxin (Black & White 2) and Zhang Jingchu (Protégé).

Kenny Lin plays Xiao Zhuang, a small-time hustler who dreams of taking over the legendary hustler himself, Shi Fuo (Tengger) not knowing he is hidden among the commoners. But when a precious Imperial seal is stolen and eyed by the Japanese army, Xiao Zhuang and Shi Fuo are reluctantly roped in by a special agent, Ruo Yan played by Zhang to retrieve the seal from the hands of the enemies.

It’s not the first time Pan Anzi has flirted with the action comedy genre, a few years back he already did Scheme With Me with Richie Jen. This time round, he seems to push things even further despite the fact his story remained paper-thin. The movie however moved at a lightning speed shifting from one scene to another liked a Looney Tunes cartoon. In this manner, I guess it’s hard to tell apart if the setup actually makes sense or logic because your eyes are too fixed on the screen.

The action adventure first took place in an Arabian-like setting before moving on to a plane which crash in the desert with all onboard miraculously surviving and then to a fight ontop a speeding steam train before the finale which took place on a gigantic cruise ship resembling Titanic. It’s all the while loud and rowdy with Xiao Zhuang, Ruo Yan and Shi Fuo constantly bickering and getting themselves into one fight after another with the enemies. As the action sequences get bigger, the CGI and gags get cheesier.

As expected, Pan Anzi introduced some clichéd Japanese killers along the way since this is an era set near to World War II. There’s a pair of psychotic-looking couple and a powerful phantom soldier that should have exist in another movie. And Pan even finds time to mock the Koreans and Americans before wrapping up his adventure tale in the most ridiculous way ever.

Kenny Lin’s character is a cross between Indiana Jones and Ethan Hunt and he did a decent job hamming it up the entire time and ripping off latex masks a la mission impossible. Zhang Jingchu who was briefly seen in the last Mission Impossible is totally wasted as the love interest and sidekick while HK veteran Kenneth Tsang appears as a villainous Japanese general. Another veteran Liu Xiaoqing has a small role as the wife of Shi Fuo and half Singaporean Vivian Dawson is as stiff as a log in his second villainous outing after Double Trouble.

For A Few Bullets is definitely a B movie with not much of an ambition to impress except to entertain audiences with the lowest expectations. The action is disheveled, the CGI embarrassing and you can forget about the plotting. End of the day, you can take home the fact that Zhang Jingchu is pretty cool as the heroine. 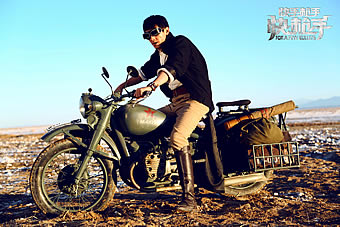 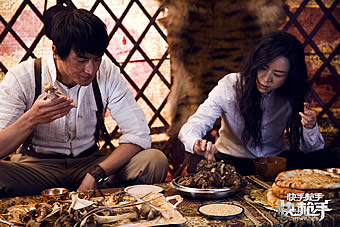 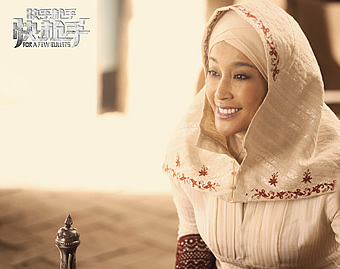