Synopsis: John (Viggo Mortensen) lives with his partner, Eric (Terry Chen), and their daughter, Mónica (Gabby Velis), in California, far from the traditional rural life he left behind years ago. John’s father, Willis (Lance Henriksen), a headstrong man from a bygone era, lives alone on the isolated farm where John grew up. Willis is in the early stages of dementia, making running the farm on his own increasingly difficult, so John brings him to stay at his California home so that he and his sister Sarah (Linney) might help him find a place near them to relocate to. Unfortunately, their best intentions ultimately run up against Willis’s adamant refusal to change his way of life in the slightest. During his stay at John’s California home, tension builds between Willis and the rest of the family. Willis’s abrasive nature, by turns caustic and occasionally funny, is aggravated by his memory loss, bringing past and present into conflict and causing old wounds and years of mutual mistrust between father and son to rise to the surface. As Willis and John confront the events that have torn them, including their differing recollections of John’s mother Gwen (Gross), the challenge they face is to find a way to forgive each other, to accept what has happened in the past and, most importantly, what is happening to them in the present. We embark on a journey from darkness to light, from rage and resentment to acceptance and hard-won grace.

The talented Viggo Mortensen finally makes his directorial debut with Falling. In addition to directing, he also produced, wrote and composed the score. Talk about multi-tasking and talent all rolled into one.

Although Mortensen puts in a remarkable nuanced performance as the long torture son of Willis, its Lance Henriksen who stole the limelight as the obstinate, bad-tempered father. Falling in short is a family drama about the relationship between an ailing father and his estranged son.

Willis is an old man from a forgotten era. Out of care and concern, John (Mortensen) decides to bring his father to California from the rural farm where he stayed alone to stay with his family while he tries to scout a house for him. Besides suffering from dementia and prostrate issues, Willis is also a sexist, racist homophobic old man whose vocab normally starts with “whore… fags” and ends with more “whore.. fags”. Nothing liked a colourful character liked Willis to kickstart a story.

John is an ex-air force pilot, happily married to his husband, Eric (Terry Chen) and has an adopted daughter, Monica. As expected, Willis always has some colourful words for both John and Eric and amusingly, mistaking the latter as Japanese rather than the fact that he is Hawaiian-Chinese.

For a runtime of nearly two hours, there’s not much of a story going on which perhaps is the greatest gripe of all. Mortensen makes good use of frequent flashbacks to the past where we see Willis as a young man (played by Swedish actor Sverrir Gudnason), John’s mother (Hannah Gross) and himself as a young child. Willis is still the A-hole as before in case you are wondering. He doesn’t seem particularly happy with his beautiful wife and kids. The sad part is there’s isn’t much of an explanation why his wife left him shortly. But we see him hooking up with another beautiful young lady named Jill shortly after. We heard from conversations they are both wonderful wives to Willis but we never get to learn more.

The present Willis continues to swear and slur in the meantime on every single occasion including a visit to the doctor (director David Cronenberg in a cameo) and his daughter, Sarah (Laura Linney also in a cameo) who drops by for a visit with her two kids. Alternating between past and present, Willis has no patience for his son and basically everyone around him, not even his two late wives except showering his love on Monica, the only family member that got the pardon from his non-stop rattling.

Because the constant flashbacks doesn’t give much hindsight to the strained father-and-son relationship, Falling somehow develops into a tiring melodrama despite Mortensen’s best intention to showcase the fracture relationship. Is John simply fulfilling his duty as a son to take care of his terminally ill father? Or is there a nicer side of Willis which we never see?

Accordingly, part of the story is inspired by Mortensen’s experience in taking care of both his late parents who suffered from dementia. The gay part is creative writing though. Henriksen delivers one of his career best performances, a character you tend to hate and sympathise at the same time. Mortensen in general did a wondrous job turning out a picturesque drama with outstanding performances. What doesn’t work here is compensated by the mentioned facts.

(An artsy family drama from the very talented Viggo Mortensen) 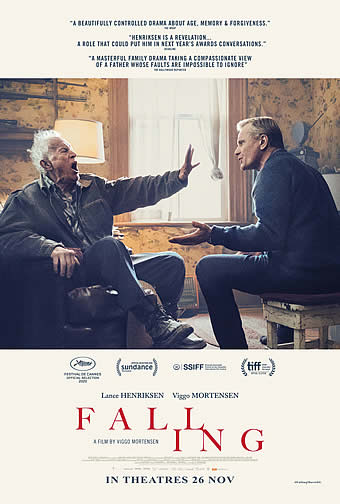 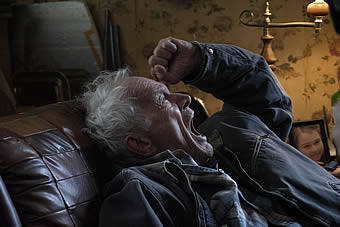 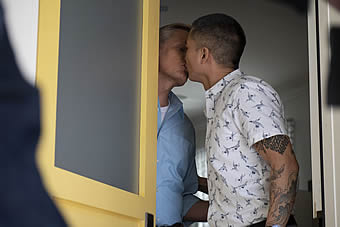 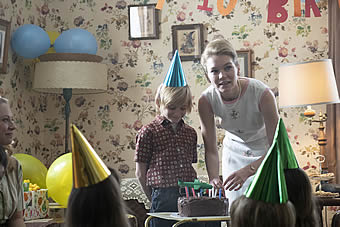 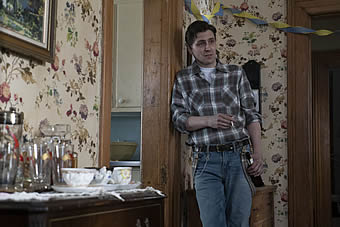