Synopsis: Fallon Zhu (Donnie Yen) is a Hong Kong police officer – an agile fighter with a high crime detection rate. Dumped by his fiancée Chloe (Niki Chow), Fallon was heartbroken and started indulging in food. In six months, he became 200+ pounds. His superior, Superintendent Huang, puts him in charge of escorting a convict to Japan. A series of mishaps befall him in Japan; not only did he lose all of his belongings; he also lost the convict in his custody. His luck overturned when he met Thor (Wong Jing), another Hong Kong citizen. The both of them join forces to solve the mystery behind Fallon’s convict’s strange and sudden death.

If it is indeed true that ‘Ip Man 4: The Finale’ is Donnie Yen’s last Kungfu movie, then ‘Enter the Fat Dragon’ is as promising an entry into the action comedy genre as it gets. Like the classic 1978 Sammo Hung movie of the same name, it is an unabashed tribute to Bruce Lee and his martial arts, which should be apparent from its poster of Yen in Lee’s signature yellow jumpsuit while wielding the nunchaku; oh yes, if that isn’t clear, Yen’s overweight Hong Kong police officer Fallon Zhu openly references that classic Lee film, making no apologies for behaving like the legendary actor in front of the Japanese yakuza while taking them on in the heart of Tokyo.

Besides sharing the same title though, there is little to no similarity between Hung’s earlier movie and Yen’s latest. Whereas Hung was an apprentice pig farmer sent to the big city to help his family, Yen is a 200-plus pound officer who is sent by his good friend and colleague Shing (Louis Cheung) to escort a suspect back to Japan to stand trial for a traffic offence. While Hung’s farmer has to stand up against a gang of thugs causing trouble at the grocery stand where he works, Yen’s officer does so against the yakuza to whom Shing’s friend Thor (Wong Jing) and his lover Christina (Teresa Mo), who operates a Chinese hotpot restaurant in Kabuki-cho, owes money to.

In fact, the over-eager police officer Fallon Zhu is caught up in a lot more than that. The suspect of his assignment, an AV director named Yuji (Hiro Hayama), so happens to be a witness and possess evidence of mob boss Shimakura’s (Lawrence Chou) cocaine smuggling operation at Tsujiki Market, and after escaping from custody, is found beaten and dead in the Tokyo River. Refusing to simply let the case rest, Fallon takes it upon himself to investigate Yuji’s death, incurring not just the wrath of Shimakura’s gang but also that of his corrupt Japanese counterpart Inspector Endo (Naoto Takenaka). To make matters worse, his former fiancée/ actress Chloe (Niki Chow) becomes implicated in it too.

It isn’t surprising that Fallon will make things right both professionally and personally in the same stroke, ensuring that justice is served on Shimakura and patching things up with Chloe by the dramatic finale within the restaurant of and on the stairs of the Tokyo Tower. What is surprising is how beautifully it comes together not just plot-wise but also character-wise, thanks to a polished script co-written by Wong Jing, Philip Lui and Ronald Chan – oh yes, it isn’t just how the series of events leading to Fallon’s depressive binge eating, his encounters with Endo, Thor and Christina, and finally to Chloe’s involvement with Shimakura are plotted nicely, but also how Fallon goes from self-confidence to self-doubt to self-determination.

None of that is handled with a heavy hand; instead, Wong Jing, who co-directs the movie with Kenji Tanigaki, keeps the tone deftly balanced between comedy and drama. There are plenty of hilarious moments, such as how Fallon comments casually during their pre-breakup quarrel how the latter has only one acting expression, or how Fallon celebrates his birthday alone with a candle stuck on top of a polo bun, or how Yuji escapes with literally his pants down on the back of a truck, or how Thor gets high after stealing one of the cocaine-stuffed tuna at Tsujiki for sashimi. Oh yes, it is often laugh-out-loud funny, and Wong Jing does so without ever needing to resort to repetition or exaggeration.

Though ably assisted by supporting players such as Chow, Wong and Mo, the movie belongs through and through to Yen himself, who acts and fights through heavy facial prosthetics and fatsuit as you’ve never seen him done so before. Yen is absolutely and effortlessly endearing as the earnest but unlucky Fallon, who despite the setbacks he has to endure, is down but never out. Yen also brings a heretofore unseen playfulness to the role that is utterly infectious, and you’ll probably be restraining yourself from cheering out loud as he channels his inner Bruce Lee with the yakuza on the streets of and the rooftops over downtown Tokyo.

Speaking of action, Yen himself serves as action director, and together with his regular collaborator Tanigaki as choreographer, devises a couple of inventive sequences both comical and exciting. Among the highlights are a foot dash through the narrow alleys of Tsujiki, a rooftop cat-and-mouse chase in the Kabuki-cho, and an intense mano-a-mano fight between Fallon and Shimakura; in particular, the last, though admittedly indulgent, is deliberately designed to allow Fallon to go full Bruce Lee over his opponent. While brief, you’ll also certainly enjoy Yen’s spiritedness to spoof his own cop movies of the past, with iconic scenes from ‘SPL’ and ‘Flash Point’ re-enacted for some good nostalgic laughs.

Frankly, we’d never expected to enjoy ‘Enter the Fat Dragon’ as much as we did – for one, Wong Jing’s involvement is always cause for caution; and for another, Yen is new to the action comedy genre. And yet, their collaboration here is probably the most inspired you’ve seen from either of them in some time, with Wong regaining the comedic mojo he has arguably lost and Yen in one of his most surprisingly entertaining roles. Not only is it perfect to put you in a jolly mood for the Lunar New Year season, it is also simply one of the best examples of the genre. We’ll gladly enter the fat dragon with this comic ensemble any time of the year. 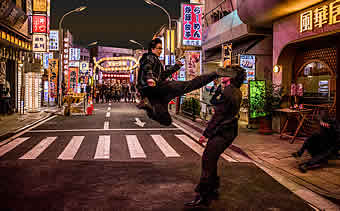