Synopsis: From Disney and visionary director Tim Burton, the all-new grand live-action adventure Dumbo expands on the beloved classic story where differences are celebrated, family is cherished and dreams take flight. Circus owner Max Medici (Danny DeVito) enlists former star Holt Farrier (Colin Farrell) and his children Milly (Nico Parker) and Joe (Finley Hobbins) to care for a newborn elephant whose oversized ears make him a laughingstock in an already struggling circus. But when they discover that Dumbo can fly, the circus makes an incredible comeback, attracting persuasive entrepreneur V.A. Vandevere (Michael Keaton), who recruits the peculiar pachyderm for his newest, larger-than-life entertainment venture, Dreamland. Dumbo soars to new heights alongside a charming and spectacular aerial artist, Colette Marchant (Eva Green), until Holt learns that beneath its shiny veneer, Dreamland is full of dark secrets.

This is definitely Disney’s year. Not counting the Marvel Studios and Star Wars movies, there are four live-action adaptations of beloved Disney animated films. Before we fly on a magic carpet with Aladdin, reclaim the throne with The Lion King and discover the dark secrets of Maleficent: Mistress of Evil, we are soaring the skies with a certain elephant with oversized ears.

If you don’t already know, the movie’s titular character is an elephant with huge ears. It becomes a laughing stock of a circus that is struggling to make ends meet. When two kind kids realise that the elephant can fly, the circus sees a glimmer of hope. Alas, things change when enterprising businessmen step into the picture and the troupe has to move to a disturbingly commercialised theme park.

Despite a runtime of 64 minutes (it is one of Disney’s shortest animated features), the original film won audiences over with its pleasant charm. It won Best Scoring of a Musical Picture at the 1941 Academy Awards and Best Animation Design at the 1947 Cannes Festival. The filmmakers of this updated live-action version probably felt that today’s viewers won’t buy the same simplicity, which explains the various storylines going on in the movie.

Colin Farrell (Widows) is a former trick rider who returns home with a lost arm. He has to come to terms that his two children (Nico Parker and Finley Hobbins) are still trying to deal with the loss of their mother. Michael Keaton (Birdman) is an entrepreneur who convinces a larger than life circus owner (Danny DeVito from Smallfoot) to move his small business onto a larger canvas finances by a loaded banker played effortlessly by Alan Arkin (Going in Style). Eva Green (Miss Peregrine's Home for Peculiar Children) puts her femme fatale persona to good use by playing a trapeze artist who strikes up a romance with Farrell. There is also a handful of supporting circus acts which remind you of the misfits in The Greatest Showman. Not all the storylines work well and you wish that they kept things simple.

Fortunately, the gorgeous cinematography makes up for this flaw. The best bits of the movie belong to Dumbo. The scenes of the adorable elephant soaring in air will make you feel like a child again.

Burton, who is known for his stylised visual flair, delivers another impressive piece of work. The circus never looked more impressive. One moment we gaping in awe at the myriad of colours, and fearing for the protagonists the next as they try to escape from lurking shadows. The scenes remind us of Big Fish (2003), another one of Burton’s heartfelt films that take place against a backdrop of mystical circus setting. The visuals complement what Burtondoes best – telling a tale about being an outsider.

And geeks would point out that Keaton and DeVito are sharing the screen for the first time since Batman Returns (1992). The caped crusader and the villainous but sad Penguin are outcasts in their own rights. Who would have thought the duo would reunite in a Disney family movie 27 years later, and that the rivalry is reversed?

Thanks to Tim Burton who also directed the two men in Batman Returns, ‘90s kids would have a fun time watching this live-action adaptation of the 1941 Disney animation classic. How apt, because most of them are probably parents by now and nothing beats bonding with your children over a tale which emphasises the importance of understanding others’ differences and believing in yourself.

(Soar with Dumbo and feel like a child again!) 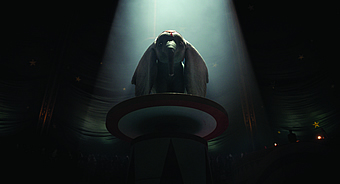