Synopsis: Jim Dillon (Golden Globes nominee Guy Pearce) is a former Texas Ranger with a checkered past. Now a washed-up marshall in the dying town of Silver Rock, he refuses to carry a gun ten years after one of his bullets left his partner paralysed during a shootout on the Mexican border. Jim is forced to take action when a ruthless biker gang rolls into Silver Rock looking to raise hell. Led by the psychotic Diablo (Devon Sawa), the gang invades Main Street, cuts the phone lines, and takes the entire town hostage. Refusing to touch his gun, Jim is left to use his fists to defend the townspeople against the well-armed bikers. Once a U.S. Marine boxing champ, he picks off the gang one-by-one with the help of his young part-time deputy, Matt. When it becomes clear that Diablo intends to leave no witnesses, Jim is left with no choice but to pick up the gun he hasn’t touched in a decade and to become the hero he was always meant to be.

Most people known him as the villain in Iron Man 3 but Guy Pearce is more reputable for his appearances in acclaimed movies liked Memento and L.A. Confidential. In recent times, he also appeared as Peter Weyland in Ridley Scott’s Alien: Covenant. As to why a reputable actor liked him appearing in this cheap direct-to-video actioner, Disturbing the Peace is a mystery worth pursuing.

Pearce plays small-town U.S. marshal Jim Dillon, probably the only enforcer in the country who refuses to carry a gun after he accidentally shot his partner a decade ago. The story by retired federal agent Chuck Hustmyre has no time for Dillon to dwell on his guilt for long as minutes later, a gang of ruthless bikers led by Diablo (Devon Sawa) is seen riding into town and plans to rob the local bank and an armoured truck packed with $15 million.

Diablo and gang however have no plans to make a quiet entrance and exit. They went on a rampage by killing a cop, two civilians and held the entire town hostage in a church. An excellent plan indeed. And now it’s up to guilt-ridden, depressed Jim Dillon to save the day if he manages to find the courage to pick up a firearm again.

Disturbing the Peace would have been a guilty pleasure to watch if director York Alec Shackleton has made a few creative decisions regarding the action sequences. The under-appreciated Kim Jee-woon’s actioner, The Last Stand (2013) which starred Arnold Schwarzenegger and mostly set in a small-town entertained audience with its stylish shoot-outs, car stunts and fist fights. Disturbing the Peace however delivers a few miserly amateur shoot-outs, a couple of booby traps set by Dillon although it did try to introduce a strong female character in the form of café waitress, part-time pastor Catie (Kelly Greyson) whom evidently is also a mean fighter.

The talents of Guy Pearce apparently are wasted in this movie as he is frequently seen dashing from point to point, shouting orders to his second-in-command and has a few sullen moments to showcase his character’s angst and remorse. The main antagonist Diablo is a man with a checkered history who once lived in the town. As to why he hates this town so much is entirely omitted from the script. He is just a dumb jock grabbing some fast cash I guess.

With a runtime of less than 80 minutes (excluding the credits), the production values on the whole is horrible, the acting even worse. The best scene in the entire movie is watching Jim Dillon riding a horse chasing down Diablo and even then, Rick Grimes did it way better in the Walking Dead. Mr. Pearce deserved better material because right here, he is simply disturbing the peace.

(A poorly staged actioner and even weaker story about redemption) 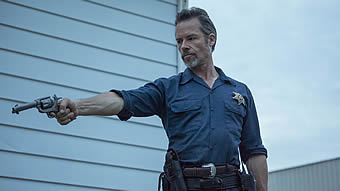 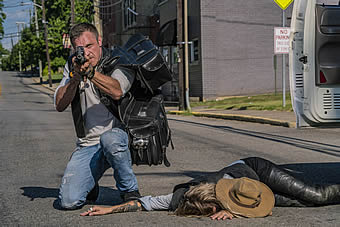 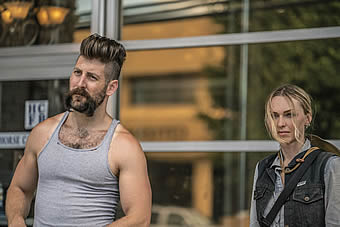