Synopsis: Ten years after a collapse of the western economic system, Australia’s mineral resources have drawn the desperate and dangerous to its shores. With society in decline, the rule of law has disintegrated and life is cheap. Eric (GUY PEARCE) is a cold and angry drifter who has left everything and everyone behind. When his car – his last possession – is stolen by a gang of desperate desert hustlers, Eric embarks on a ruthless mission to track them down. Along the way, he is forced into an unlikely relationship with Rey (ROBERT PATTINSON), the naïve and injured younger brother of gang member Henry (SCOOT MCNAIRY) who has left Rey behind in the bloody aftermath of the gang’s most recent robbery.

No thanks to a certain franchise known as The Twilight Saga, Robert Pattinson hasn’t received the kindest critic response for the past few years. You see, playing a pale vampire may not be that good a thing for your showbiz career if you want to be taken seriously. Sure it may have brought in the fat paycheck (yay for the movie studio for milking the teen novel series dry), but if you’re thinking of staking it out in the entertainment industry, you’d better start looking around for credible productions to star in.

Pattinson has dabbled in films like How to Be (2008), Water for Elephants (2011), Bel Ami (2012), but none of that made a big impact to break him out of his pale skinned Edward Cullen persona. With his latest involvement in this Australian drama film written and directed by Favid Michod (whose brilliant work Animal Kingdom we never got to see in cinemas here), the 28 year old English actor may just begin getting offered casting projects that will bring him far in showbiz. While we can’t say his Twilight co star Kristen Stewart will be as well loved as the critics anytime soon (Snow White and the Huntsman, anyone?), that’s another commentary for another day.

Pattinson plays Reynolds, a simple and naïve southern American youngster who crosses paths with Guy Pearce’s Eric, a violent and bitter former Australian soldier who has lost his farm and family. The backdrop is set 10 years after a global economic collapse, and the world as the two men know it is in a mess. Eric’s sole mission is to track down the men who stole his last remaining possession – his car, and when he meets Reynolds, he takes things into his own hands to make the needy young man an accomplice.

The 103 minute movie is a slow, measured and meticulous chase across a desolate landscape, and we see a future is so messed up you can’t even depend on getting shot. It is a bleak setting where one super power rules the world; medical assistance is lacking, prostitution is everywhere, guns make the rules and American currency is the preferred method of payment. Yes, there is military presence, but even the soldiers do not know what their cause is.

Michod has perfected a contemporary western of sorts, with a Clint Eastwood style character driving the story through his singular desire. He co wrote the story with actor producer Joel Edgerton (you may remember his wonderful screen presence in 2012’s Zero Dark Thirty and 2013’s The Great Gatsby), and the result is a different sort of buddy movie (call it Rain Man if you will). There is violence here, but the movie offers an odd bond between two damaged human beings who have little in common beyond the damage.

Pearce (Lockout, Iron Man 3) delivers an impressive performance as usual, having impressed the film community with his roles in The Adventures of Priscilla, Queen of the Desert, L.A. Confidential and Memento. He connects with audiences with his portrayal of a man who has seen the world collapse, still remembers a time when things were different but is living life in a murderous and dangerous way. Pattinson, on the other hand, surprises us with his emotionally engaging performance as a dependent individual who has experienced more than a few complications in his life.

The result of this chemistry is a very watchable drama that gives more satisfaction that your usual popcorn blockbuster. 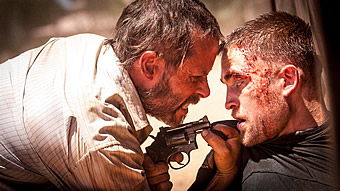 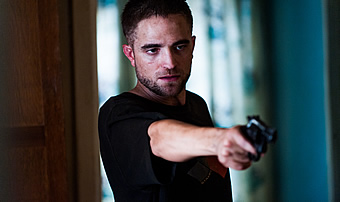 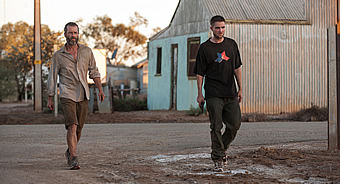