Synopsis: A former navy commander (Kim Rae-Won) receives a phone call from an anonymous man. The caller states that he has set up bombs in locations filled with people, including a soccer stadium and a water park. The bombs are "sound bombs" that will detonate when nearby ambient sounds surpasses 100 decibels. The former navy commander desperately tries to stop the terror attacks.

As far as high-concept action thrillers are concerned, ‘Decibel’ has a former decorated Navy commander Kang Do-young (Kim Rae-won) race against time to stop a series of bombs planted by a former disgruntled colleague that are triggered by sound. No thanks to decibel meters attached to each one of these bombs, the countdown starts when the ambient noise exceeds 100 decibels, and the timer is halved whenever the same threshold is reached.

Former weapons officer Tae-song (Lee Jong-suk) had mailed the first of these bombs to Kang’s former fellow submarine commanding officer Kim, and has planted the rest at a football stadium, a children’s playground and a water park respectively. As we soon learn, each of the locations is meticulously chosen to exact personal revenge on those responsible for Tae-song’s grievance over a tragic incident a year ago which claimed the life of his brother Tae-ryong (Cha Eun-woo).

Without giving too much away, the incident has to do with a stray torpedo that had suddenly come alive and after the ROKS Halla, which had been returning home from Guam after the RIMPAC exercises with the United States. 22 of the ROKS Halla crewmen had allegedly died from bulkhead failure, though it is not hard to tell that there is more to that than meets the eye when each and every one of those who had lived seemed wracked a year later by survivors’ guilt.

Kang finds an unlikely ally in independent journalist Oh Dae-ho (Jung Sang-hoon), who has a run-in with Kang at the stadium where Oh had brought his son to watch the friendly match between Busan United and Road Tokyo FC. Not only will he prove to be an invaluable partner, Oh will also provide some welcome moments of levity amidst the tense and often relentless proceedings, what with Kang rushing from place to place to stop the bombs and save his kidnapped wife and daughter.

In his first film in eight years, writer-director Hwang In-ho largely keeps the pace taut by keeping the focus tight on the cat-and-mouse game between Kang and Tae-song. Their rivalry has a compelling moral dimension to it, and to Hwang’s credit, the extended flashbacks to the ordeal which the ROKS Halla had to endure reinforce the impossible choice which Kang had faced as the ship’s commander. The subplot of a Government cover-up is thankfully kept brief, and through the addition of a key supporting character in the form of Defense Security Command officer Cha Yong-han (Park Byung-eun).

It should come as no surprise that ‘Decibel’ needs to be enjoyed with a fair amount of suspension of disbelief, but this nail-biting thriller is for the most part credible enough for you to buy into its high-stakes scenario. Though it doesn’t boast a heavyweight cast, ‘Decibel’ is no lesser an action blockbuster that will get your pulse racing and keep you at the edge of your seat. We don’t take the execution of such high-concept thrillers for granted, so consider it generous praise when we say we enjoyed ‘Decibel’ much more than we expected ourselves to, and we see no reason why you won’t feel likewise.

(Largely taut, intense and compelling, this high-concept action thriller succeeds at being a breathless nail-biter from start to finish) 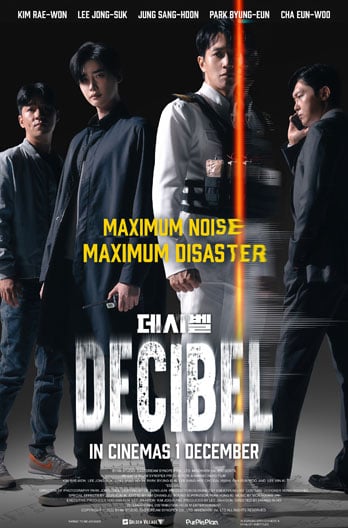