Synopsis: Confidential Assignment is back! This time, 3 countries are joining forces! In order to bring down an international criminal organization that is hiding in South Korea, elite North Korean detective Lim Cheol ryung (HYUN Bin) is dispatched to the South , while South Korean detective Kang Jin tae (YOO Hai Jin) is sent to Cyber Crimes unit when an undercover operation goes South. He’s desperate to return to his old team when he’s given a special detail with Cheol ryung once more. As Min-young’s heart is reignited to see Cheol ryung once more, he and Jin tae proceed to work together despite being suspicious of each other’s motives. Just as they’re about to raid the criminal organization’s leader, JANG Myung jun (JIN Sun Kyu)’s hideout, FBI agent Jack (Daniel HENNEY) bursts in!

"We're the Avengers. Thanos is on the brink of erasing half of  mankind. We can't have Iron Man and Captain America fighting each other, can we?" - Inspector Kang Jin-tae (Yoo Hae- jin)

The film unfolds in New York against the dazzling night skyline with gunshots heard in the distance, ensued by an emotional and explosive prelude to the 135-minute action blockbuster.

Hyun Bin plays Kim Chul-ryung, a North Korean cop deployed from Pyeongyang who then makes his way to South Korea (for the second time) in pursuit of Jang Myung Jun (Jin Seon Kyu), the head of a global crime ring that disappears with 100-million dollars in his Swiss bank. And the head hunt officially begins.

Fast forward to South Korea, you would recall a warm-hearted and funny Inspector Kang Jin- tae (Yoo Hae-jin) who is a legend in Seoul's major crime division from the previous instalment where he almost lost his family. Inspector Kang makes a hilariously powerful character that helps bind the growling big boys with guns and eventually succeeds in bringing them together in search of a common enemy. And representing the face of FBI, Jack (Daniel Henney) is sent to South Korea in pursuit of the same crime ring leader following a beef with Chul-ryung (Hyun Bin).

Contrastingly, Im Yoon-ah plays the lovestruck, aspiring YouTuber who is obsessed with Chul-ryung (Hyun Bin). As the plot deepens, Min-young (Yoon-ah) is spoilt for choice as soon as Jack (Henney) enters the picture. The SNSD band member takes humour to the next level with plenty of tricks up her sleeve.

Hyun Bin has once again lost his boyishly handsome cliched persona for the second time in five years. Chul-ryung displays a slightly vibrant personality this time round in comparison to his darker character in the previous instalment, that had him set on avenging his wife's demise. The ‘My Name is Kim Sam Soon’ fame spots a tanned, suave, serious look with a cool cut hairdo and facial hair that will definitely have a chokehold on many. Henney undoubtedly gives his part much personality with the same appeal that he is known to possess since his Hawaii Five-O and Criminal Minds days while lending a touch of Hollywood to this second instalment of the 2017 action film.

This action entertainer contains a few humorous moments that offer a stark contrast to the rest of the parts that are heavily punctuated with gunshots and bloody punches. The constant bangs and booms will definitely have the audience engaged, except for a teeny-weeny bit of slump in the plot somewhere in the middle. One may experience déjà vu upon seeing some James Bond-inspired fight scenes and the main men do their stylish synchronised strut (and that too) in slow-mo.

The only commonness among these crème de la crème agents are sadly far from the usual representation of the loyal ride or die brotherhood. The reason being? They've pledged allegiance to superiors with questionable motives and are following orders like a horse with blinkers in pursuit of a stereotypical villain (Jang) who had lost his family in a political- inspired feud.

With drug cartel, diplomatic feuds and feisty fights between men in suits as its main theme, this sequel that hinges on a three-way operation certainly has the comedic and action elements upgraded. Excellent choice of cast, with their original roles reprised and expanded to a global scale. The fight scenes that literally pack a punch with the audio efx are fire! The film’s energy certainly matches the hype of the theatrical poster and official trailer. Is it vastly different from other action dramas? Nah! But the fact that this entertainer is part of a multi-instalment franchise makes it fondly memorable.

(A positively enjoyable action flick to catch on any given day. A worthwhile watch. An even-paced, absolute audience-pleaser, for both the young and young-at-heart) 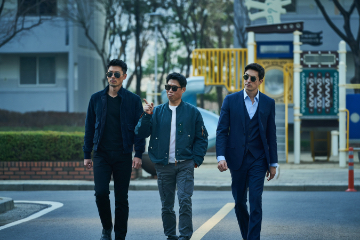