Synopsis: The story follows native New Yorker Rachel Chu (Wu) as she accompanies her longtime boyfriend, Nick Young (Golding), to his best friend’s wedding in Singapore. Excited about visiting Asia for the first time but nervous about meeting Nick’s family, Rachel is unprepared to learn that Nick has neglected to mention a few key details about his life. It turns out that he is not only the scion of one of the country’s wealthiest families but also one of its most sought-after bachelors. Being on Nick’s arm puts a target on Rachel’s back, with jealous socialites and, worse, Nick’s own disapproving mother (Yeoh) taking aim. And it soon becomes clear that while money can’t buy love, it can definitely complicate things.

We are proud, immensely proud, to say that for a little red dot which some had up until recently mistook as a province in China, Singapore has been getting plenty of limelight within the last few months. On the political stage, the recently concluded Trump-Kim Summit that was dubbed the ‘Singapore Summit’ showcased our professionalism at organising a milestone diplomatic event. And just barely two months after, the very first Hollywood film to feature an all-Asian ensemble in more than 20 years (the last being Ang Lee’s ‘Joy Luck Club’ back in 1993) is easily the most impressive our island city has ever looked on the big screen. Oh yes, the iconic touristy locations including Chijmes, Marina Bay, Gardens by the Bay and Marina Bay Sands are all there, but there are also surprising nods here to our hawker culture (which you may have heard our PM announcing at this year’s Rally is being put up for a Unesco listing) and Chinese heritage that you’ll cheer for, and damn if seeing the sights and sounds we call home doesn’t make our hearts swell with national pride.

Indeed, ‘Crazy Rich Asians’ is as much a win for Asian-Americans as it is for Singapore, and you’d be plain silly to let some misplaced criticism about how the movie doesn’t reflect the real Singapore (because it was meant to be a satirical fantasy?) or lacks the representation of other races (because no film set in New York, or London, or Los Angeles reflects the full cultural breadth of the place?) rain on our parade. Gamely assembling an outstanding ensemble cast from Hollywood, Malaysia and Singapore, this adaptation of Singapore-born author Kevin Kwan’s bestselling novel is as breezily entertaining and hilarious as the best of the rom-coms, but its examination on class, culture and the Asian identity is what truly gives it emotional heft and thematic resonance. In fact, it would be utterly simplistic to say that it is a critique on the nouveau riche in Singapore society; there is also the intra-community prejudices within the Asian diasporas, the Chinese tradition of filial loyalty and its implications on parent-child relationships, and last but not least the tensions between different forms of identity including personal, cultural and class.

If it isn’t yet obvious, this movie is so, so much more than just an indulgence in the escapist pleasures of the ultra-rich that its synopsis may suggest. Certainly, as the young economics professor Rachel Chu (Constance Wu) at New York University accompanies her boyfriend Nicholas Young (Henry Golding) back to Singapore for his best friend’s wedding, she plays the role of the audience surrogate channelling our sense of disbelief, amazement and disgust at his family and their never-never land of aspirational wealth, obscene consumerism and invidious judge-iness. Yet beyond these and the obvious caricatures of Nick’s movie-director cousin Alistair (Remy Hii), his status-conscious Hong Kong cousin Eddie (Ronny Chieng) as well as spoiled-rotten bachelor Bernard (Jimmy O. Yang), there is plenty of sobering material about Nick’s formidable mother Eleanor’s (Michelle Yeoh) disdain towards Rachel and protectiveness towards her son. Ditto the crumbling marriage between Nick’s fashion-maven cousin Astrid (Gemma Chan) and her husband Michael (Pierre Png), owing to the latter’s inferiority complex and subsequent infidelity.

As directed by Jon M. Chu, the movie is perfectly balanced between big broad sequences and quiet intimate moments. The former comprises the gaudy scenes of opulent dinner gatherings, lavish bachelor/ bachelorette parties and $40 million weddings that the trailer was full of, and Chu’s eye for colour and movement ensures that these scenes are lively, vibrant and eye-popping. But it is the latter where his film truly scores – witness for instance how Chu and his cinematographer Vanja Cernjul capture the way Eleanor sizes Rachel up and subsequently regards her with withering putdowns as well as icy glares, and how Rachel and Eleanor face off in a penultimate segment over a thrilling game of mah-jong. Just as captivating but for entirely different reasons are the occasions where Nick and Rachel distance themselves from the crowd and allow themselves to re-discover just why they had fallen in love with each other in the first place. As packed as the movie is with its huge group of characters, Chu never loses focus on his core characters and their relationships vis-à-vis one another, and it is his keen eye for these interactions that ensures his film also possesses emotional gravitas.

Most significantly, ‘Crazy Rich Asians’ offers a touching lesson on embracing who you are, no matter if you’re rich or poor or disparaged. That is as true for Nick as it is for Rachel, just as true if not more so for Eleanor, and surprisingly poignant for both Astrid and Michael. Wu is a standout as the classic good-girl, never overselling the role but instead playing it with just the right mix of poise, vulnerability and self-assertiveness at the right time. Her chemistry with Golding is also infectiously appealing, and for all the hackles about casting a British Malaysian actor to play a Chinese Singaporean justifies the casting choice with his own polished screen charisma. Even more electrifying though is the push-pull dynamic between Wu and Yeoh as their characters lock horns with each other, and though the movie belongs to the younger actors, the veteran Malaysian actress is absolutely regal in her supporting role that is crisp, authoritative but also unexpectedly deserving of empathy. Chan and Png try to flesh out the complications arising from a reversal of the classic Asian husband-wife breadwinning role, but they as well as the other more minor supporting actors relegated to over-the-top bit comic parts are constrained by their little time onscreen.

That said, Kwan’s novel wasn’t ever going to fit neatly into a two-hour feature film, which also means that some of the subplots were going to necessarily receive short shrift; still, for the most part Chu’s screenwriters Peter Chiarelli and Adele Lim have retained the core themes within the novel and ensured that these remain just as affecting as Kwan had intended. Like we said at the beginning, Singapore has never looked as gorgeous as it does in this movie, and credit to that colourful razzle-dazzle goes of course to Chu’s visual eye. Yet beneath that shiny veneer is also a layered reflection of the Singaporean Chinese identity, which is both ethnically similar and different to the American-Chinese (or better known as Asian-American) identity, demonstrating how race is shaped as much by history, geography and kinship. Ultimately, its message about identity is as much relevant for an Asian-American audience as it is for us, especially how our multi-racialism often neglects intra-racial differences as well as class differences. You need not be Asian, or crazy rich, or even Chinese, to enjoy this hilarious, romantic and heartfelt rom-com that doesn’t lose its cultural richness while retaining its universal appeal.

(As hilarious, romantic and heartfelt as the best of the rom-com genre, 'Crazy Rich Asians' is also a surprisingly textured and poignant examination of ethnic, class and personal identity - as well as the best Singapore has ever looked on the big screen) 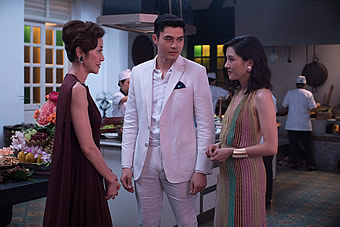 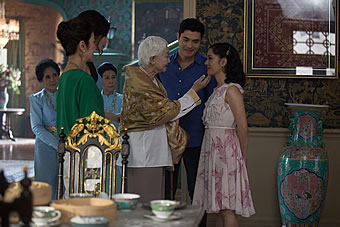 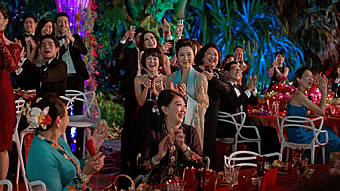 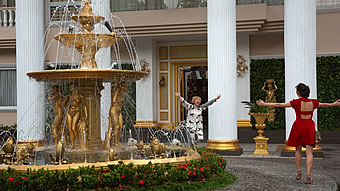