Synopsis: Welcome to Kehoe, it’s -10 degrees and counting at this glitzy ski resort in the Rocky Mountains. The local police aren’t used to much action until the son of unassuming town snowplough driver, Nels Coxman (Academy Award nominee Liam Neeson), is murdered at the order of Viking (Tom Bateman), a flamboyant drug lord. Fueled by rage and armed with heavy machinery, Nels sets out to dismantle the cartel one man at a time, but his understanding of murder comes mainly from what he read in a crime novel. As the bodies pile up, his actions ignite a turf war between Viking and his long-standing rival White Bull (Tom Jackson), a soulful Native-American mafia boss, that will quickly escalate and turn the small town’s bright white slopes blood-red.

How many times have you seen Liam Neeson play a man with ‘a very particular set of skills’? Besides the ‘Taken’ trilogy, there are probably another four films to add to that count, including ‘Unknown’, ‘Non-Stop’, ‘Run All Night’ and ‘The Commuter’. But before you dismiss this latest action thriller as yet another hoping to cash in on his prolific genre hero, you should know that Norwegian director Hans Petter Moland’s remake of his 2014 original (which starred Stellan Skarsgard in the role) is a lot more sophisticated than that. Heck, besides throwing a mean punch and knowing how to shoot, Neeson’s character doesn’t even have that particular set of skills to speak of.

And we would say that is for the better, considering how his character named Nels Coxman (let the jokes commence) is supposedly a taciturn snowplow driver who, before his son turns up dead from a heroin overdose, was an exemplary public servant of the ski resort town of Kehoe, Colorado. As the early scenes establish, he would have been perfectly content going about his daily task of maintaining the roadways diligently and dutifully, and coming home at the end of it to his wife (Laura Dern) and son (Micheál Richardson, Neeson’s real-life son with Natasha Richardson). Yet that life is shattered by his son’s sudden death, which not only causes his grief-stricken wife to leave him but also plunges him into a near-suicidal state.

It so happens that Nels would catch his son’s work colleague hiding out in his shop just as he is about to shoot himself in the mouth with a rifle, the latter battered and bloodied but lucid enough to tell Nels that his son’s death was in fact staged by a Denver-based drug syndicate eager to send a message. Nels also forces him to give up the name of who was responsible, and from that very first lowlife (whom he punches relentlessly in a cargo elevator and subsequently strangles to death at the back of his van), finds himself on an irreversible course up the chain of command to terminate everyone in the organisation who perpetrated his son’s cruel murder.

Like we said at the start, the film doesn’t over-stretch the bounds of Nels’ physical abilities in these kills; or for that matter his ingenuity in disposing of the bodies using chicken wire (so that the fish would feed on their flesh and they would not bloat to the surface), which Nels explains he had read in a crime novel. Just as significantly, while the chain of events is triggered by Nels’ desire for revenge, it isn’t propelled entirely by him. Oh no, at least half, if not more, of the final body count is due to the turf war he unwittingly sets off between the aforementioned Denver-based gang led by the ruthless drug kingpin Viking (Tom Bateman) and an American Indian gang led by the antiquities dealer White Bull (Tom Jackson).

To Moland and his screenwriter Frank Baldwin’s credit, that subplot is surprisingly well-developed, both in terms of the tit-for-tat which ensues when Viking’s men kill White Bull’s only son and the personalities on either side of the turf. The egoistical and pompous Viking, which Bateman plays to the hilt, is a fascinating character in himself, and his interactions with his tough ex-wife Aya (Julia Jones) as well as a particularly loquacious henchmen of his are fun to watch. So too the interactions among White Bull’s men, who are clearly enjoying their excuse to get out of reservation territory. The story deftly balances the rivalry between Viking and White Bull with Nels’ path of vengeance, culminating in a satisfying gunfight where these characters settle their scores with one another at the same time.

Had these events been played with a straight face, ‘Cold Pursuit’ would have been no more than a well-made B-revenge flick; but as it turns out, both Moland and his cast gamely approach the material with tongue firmly in cheek. That dark humour is everywhere in the film, from how Viking tells his young son that all of the answers he needs in life is in the ‘Lord of the Flies’ book, to the byplay between Emmy Rossum’s rookie police officer and her seen-it-all partner (played by John Doman), and to an elaborately set up dick joke with a gunpowder-singed punchline (that we don’t want to ruin for you). What other movie can you think of that marks each death with a pop-up card that bears a crucifix on top of the name of the person who just died?

Amidst the violence and comedy though, there is an unmistakable underlying theme in the consequences of father-son relationships inflected by the course of violence. We see that in how Nels seeks revenge for his son, which White Bull does likewise later on. Then there is Viking, who inherited the criminal business from his father and tries to impart the same philosophies to his son, resulting in a tenuous relationship that is laid out in stark contrast later on to the unexpected bond which develops between Nels and the kid. Thankfully, Moland knows better than to try to turn this into some sort of morality tale, and instead leaves his audience to draw their own conclusions about the self-perpetuating cycle wrought by violence.

It is indeed unfortunate that the movie was somewhat overshadowed by Neeson’s ill-advised remarks on his own revenge fantasy 40 years ago, but that should in no way diminishes how fiendishly entertaining it actually is, thanks to the excellent concoction of vengeance, violence and offbeat humour which Moland expertly mixes together. So as much as ‘Cold Pursuit’ bears the trappings of another standard-issue Neeson actioner, it is really much cleverer and more elegant. Let’s just say that it is for good reason that it has been compared to ‘Fargo’, and if Neeson wants to continue doing this aging vigilante thing, doing it with a wink and a smile certainly makes it a lot more refreshing. 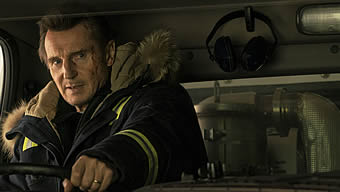 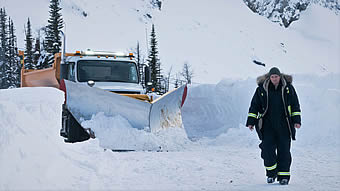 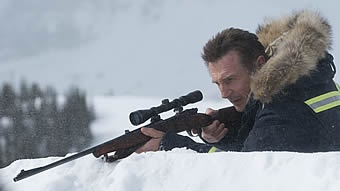 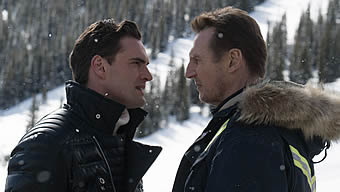 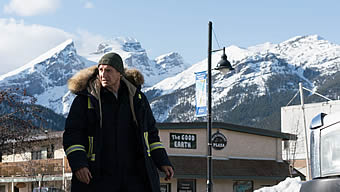 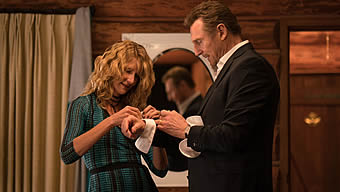