Synopsis: A politically-charged serial killer thriller set in 1953 Soviet Russia, CHILD 44 chronicles the crisis of conscience for secret police agent Leo Demidov (TOM HARDY), who loses status, power and home when he refuses to denounce his own wife, Raisa (NOOMI RAPACE), as a traitor. Exiled from Moscow to a grim provincial outpost, Leo and Raisa join forces with General Mikhail Nesterov (GARY OLDMAN) to track down a serial killer who preys on young boys. Their quest for justice threatens a system-wide cover-up enforced by Leo’s psychopathic rival Vasili (JOEL KINNAMAN), who insists “There is no crime in Paradise.”

It’s not exactly a very intelligent thing to tell people, but this reviewer often says to his friends: “What I need to know, I learn from movies.” Yup, that includes history. How did the Titanic sink? Who is Oskar Schindler and why is he considered a saviour to the Jewish? Steven Spielberg’s award winning Schindler’s List (1993) was there if you didn’t want to visit the library. How did the Titanic sink? James Cameron’s three hour epic Titanic (1997) has the answer. What happened during the attack on Pearl Habour in 1941? There’s MichaelBay’s unapologetically loud Pearl Habour (2001) for reference.

While this writer is aware that movies aren’t always the best sources to learn about true events that happened in history, you have to admit that it is so, so much more enjoyable than flipping through the pages of a thick textbook. At the same time, movies can be enjoyable, exciting and even thought provoking at times. And hey, it doesn’t hurt to have scenes playing out on screen for visual learners right?

You see, without this Daniel Espinosa directed film, we wouldn’t have glimpse into what a Joseph Stalin ruled Soviet Unionwas like. Based on British writer Tom Rob Smith’s 2008 novel of the same name, this story’s protagonist is Leo Demidov, an agent with the disgraced Ministry of State Security (MGB) who uncovers a strange and brutal series of child murders. For more on why the Soviet intelligence agency fell from grace, you can, ahem, easily check with the Internet.

The first thing you notice about this American British thriller movie is its cast. Let’s see, who do we have in the mix? We have English actors Tom Hardy (who wonderfully transformed into the towering Bane in 2012’s The Dark Knight Rises) and Gary Oldman (who is always perfect in whatever role he takes on, from Harry Potter’s Sirius Black to The Dark Knight’s James Gordon), Swedish actress Noomi Rapace (the original Lisbeth Salander in the Millennium film series), Swedish American actor Joel Kinnaman (the lead in the 2014 reboot of Robocop), French actor Vincent Cassel (who gave memorable performances in Ocean’s Twelve and Ocean’s Thirteen) and Australian actor Jason Clarke (watch out for him as John Connor in the upcoming Terminator Genisys).

Caught your breath? While the godsend cast list comes from different nations, all of them play Russians and have to speak with Russian accents. While we won’t go into who pulls it off better, it does make you wonder why filmmakers didn’t put together a Russian cast to produce this movie? You see, history may sometimes be a sensitive topic, and that’s probably the reason why Russiaand several former Soviet states are banning the movie. You may also, ahem, want to check with the Internet on the reason.

As a casual movie goer, this 137 minute production may be a challenge to sit through. Those who have no prior knowledge of the history of the Stalin era Soviet Union will have to preserve through the series of events slowly played out in the film helmed by Espinosa (Safe House) – but the slow burning story will reward viewers with a compelling tale of human nature.

It sure helps that the cast delivers compelling portrayals of the characters. Hardy is excellent as a torn military man, Oldman is effortlessly engaging, and although Paddy Cosidine (The Bourne Ultimatum, The World’s End) and Charles Dance (Tywin Lannister in TV’s Game of Thrones) have limited screen time, they make you sit up and pay attention whenever they appear.

Kudos to the production team for creating a dreary, colourless and monotonous mood with the film. You get a depressingly droning feeling of what it might have been to live in that era just by seeing the wardrobe, architecture and art direction depicted in the movie. While this may not be the best way to learn history, it does provide an idea into what the past was like, and may spark interest to read up more by visiting the library, or more likely so, ahem, on the Internet.

(The slow burning and well made film requires patience to view, and pays off with an engagingly compelling drama) 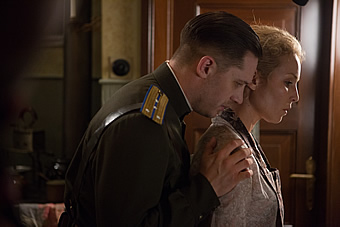 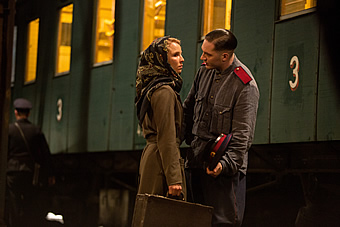 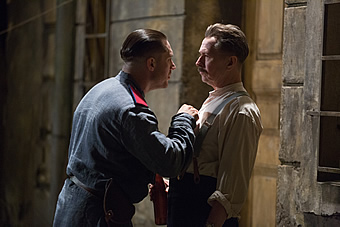 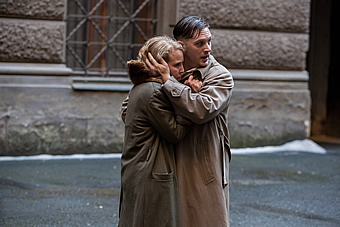