Synopsis: In the not too distant future, Todd Hewitt (Tom Holland) discovers Viola (Daisy Ridley), a mysterious girl who crash lands on his planet, where all the women have disappeared and the men are afflicted by “the Noise” – a force that puts all their thoughts on display. In this dangerous landscape, Viola’s life is threatened – and as Todd vows to protect her, he will have to discover his own inner power and unlock the planet’s dark secrets.

This movie has some of the biggest stars in showbiz. There’s Daisy Ridley who has made her name in a galaxy far, far away, Tom Holland who has charmed audiences by playing a bona fide web slinging Marvel superhero, Mads Mikkelsen who is an established Danish actor who sent chills down our spine as TV’s Dr Hannibal Lecter, Cynthia Erivo who is a celebrated Emmy and Grammy recipient, David Oyelowo who favourably portrayed Martin Luther King Jr, and the good looking Nick Jonas who is married to the beautiful Priyanka Chopra.

Yet, you don’t see any of these celebrities enthusiastically publicising this film based on the sci fi trilogy Chaos Walking, adapting its first book, The Knife of Never Letting Go by Patrick Ness.

Then you remember reading about several rewrites from a first script draft written by the quirky Charlie Kaufman. And then there were the reshoots following poor test screenings, which cost the studio an additional $15 million to the film's budget, bringing the total cost to $100 million.

So what’s so wrong about the dystopian action movie set in a world where there are no women and all living men can hear each other's thoughts? As you sit through the 109-minute film, you feel that there was great potential for the production, but along the way, things got really messy.

Holland is aptly cast as a young man living in a “New World” where the thoughts of everyone in their all male village are audible. Things change when Ridley’s space traveller crash lands on his planet and chaos ensue. Holland’s fans will giggle at how the 24 year old talks non stop as his happy, worried, sheepish and naughty are heard throughout the show. Donning a dirty singlet, he also gets to show off his lean physique. The movie also has some action sequences for him to exhibit his parkour skills.

Viewers may be intrigued by the “noise” that swirls over the characters’ heads and the overlapping voiceovers that reflect their thoughts. After a while, they do prove to be distractions to what seems to be the real problems of the movie.

The story introduces The Spackle, an indigenous species who are supposedly responsible for the elimination of the female speices. After a sequence to showcase a CGI creature, this thread was left hanging. When Holland and Ridley arrive at a location called Farbranch, they are greeted by male and female inhabitants, and little effort was put into explaining their back story, which is a waste in terms of storytelling. And let’s not even talk about the ending which is supposed to set up a sequel, but does nothing more than making us go: “That’s it?”

Also wasted is the talented cast. Mikkelsen does his best to be a mayor with evidently sinister motives, Erivo doesn’t have much to do as the leader of Farbranch, Oyelowo plays a preacher who has angry and loud thoughts about sinners and martyrs all the time, while Jonas’ role as the male mayor’s son could easily be played by anyone else.

Given the decent production values and the number of big names involved, we were really hoping that this would be a fun action movie exploring timely societal themes.

(With the star-studded cast and interesting premise, it is a pity that this dystopian action thriller falls short of expectations) 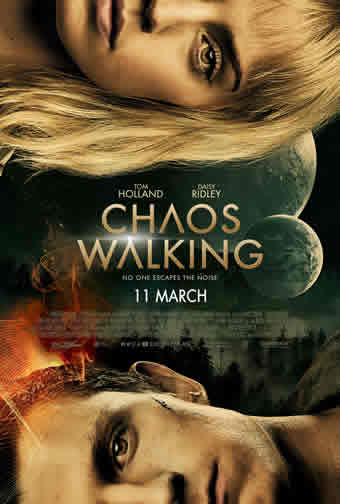