Synopsis: During the Republican era, a group of frustrated filmmakers has gathered together to make a movie out of a huge case that once rattled the city of Shanghai in the hopes that it would turn into a huge sensation and make them famous. However, they never expected that the “murderer” would be in their midsts and that the truth behind the case would be far more bizarre than their fictional movie plot.

Few would expect when it was first released that the low-budget suspense comedy ‘Be Somebody’ would become a bona fide box-office hit, not least given how fickle and unpredictable the Mainland Chinese moviegoing audience has been over the past couple of years. That alone should pique your interest in Liu Xunzimo’s filmmaking debut, which though not without flaws, is arguably one of the more original stories we’ve seen in recent years.

At first, ‘Be Somebody’ comes off as a Cluedo mystery, as blacklisted scriptwriter Li Jiahui (Yin Zheng) is ushered into a car and brought to a gilded mansion at the invitation of bigshot movie producer Lu Ziye (Chen Minghao). Li finds that he is not the only one who has been invited; joining him are B-movie director-for-hire Zheng Qianli (Yu Entai), scandal-plagued actress Su Mengdie (Deng Jiajia), former silent-era leading man Guan Jingnian (Yang Haoyu) and Hollywood stuntman Chen Xiaoda (Ke Da), all of whom Lu says have been assembled to plot their comeback.

It isn’t long before Lu reveals that they are in the very mansion where the authorities had months back discovered the gruesome murder of three gangland chiefs; and just as well, it follows soon after that Li will observe the chains around purported case expert Qi Leshan’s (Zhang Benyu) ankles, deducing therefore that Lu had in fact broken the suspect out of custody in order to advise on the conceptualisation of their true-crime drama, notwithstanding that Qi remains under the watchful eye of police escort Hai Zhaofeng (Qin Xiaoxian).

Not surprisingly, there is more to the case than meets the eye. Qi turns out to be a former soldier, though we won’t say more here about why he had committed such a heinous crime. Various parts of Qi’s account of what happened don’t seem to add up, including how he had remained inside the scene of the crime while the police spent a good half hour trying to saw the lock to get in or even how he came to be at the mansion in the first place. It is the inquisitive Li who pushes against the ostensible facts of the case to try to reconstruct the events of that fateful evening, and who also turns out to be the brains, heart and conscience of the whole lot.

To Liu’s credit, he and his co-writers (Chen Si, Zhang and Ke) pack the narrative with sufficient twists and turns to keep you engaged all the way through. Like any good mystery, this one pays attention to the details, and it is these details that enable the plotting to overturn our assumptions of the case one by one. But more than just a well-staged game of Cluedo, ‘Be Somebody’ gains additional resonance by sneaking in its own commentary about the state of the moviemaking business in Mainland China today, especially in the quarrels between Li and Zheng about how the latter had sold out his fellow artists by pandering to the market, capital and the government.

That said, the movie isn’t without its flaws, and these are apparent right from the get-go; these include a stodgy beginning that is both needlessly stagy and theatrical, and characters (such as Su and Guan) who seem to be more conveniently than conscientiously present. It also takes some time before the narrative gears get into motion, but thankfully when they do, they turn like clockwork. It is also true that while the cast do a competent job carrying the movie, they hardly add much heft to the roles that they play.

Still, it is rare to see an original work like this from Mainland China these days, which owing to heavy government intervention, has since embraced jingoism for sheer necessity. There is refreshingly no such undertone here, and in fact the undertone is probably a sly but gentle dig on the current state of affairs, so on that count, ‘Be Somebody’ deserves to be seen by more than somebody outside its home country. At its core, this is an intriguing murder mystery which is surprisingly well-paced and well-plotted, so on account of its wit and storytelling, we dare say this is one game of Cluedo you’d thoroughly enjoy..

(With wit, originality and a dash of social commentary, this suspense comedy is one of the more original Mainland China films we've seen in recent time) 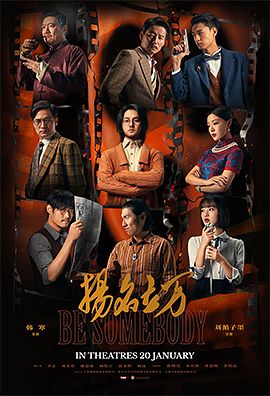