Synopsis: In the wake of the sexual revolution and the rise of the women's movement, the 1973 tennis match between women's World #1 Billie Jean King (Emma Stone) and ex-men's-champ and serial hustler Bobby Riggs (Steve Carell) was billed as the BATTLE OF THE SEXES and became one of the most watched televised sports events of all time, reaching 90 million viewers around the world. As the rivalry between King and Riggs kicked into high gear, off-court each was fighting more personal and complex battles. The fiercely private King was not only championing for equality, but also struggling to come to terms with her own sexuality, as her friendship with Marilyn Barnett (Andrea Riseborough) developed. And Riggs, one of the first self-made media-age celebrities, wrestled with his gambling demons, at the expense of his family and wife Priscilla (Elisabeth Shue). Together, Billie and Bobby served up a cultural spectacle that resonated far beyond the tennis court, sparking discussions in bedrooms and boardrooms that continue to reverberate today.

44 years after the event in which this movie is based on, women are still fighting for equality everywhere in the world. Battle of the Sexes is a fascinating watch and though it revolves around tennis, it’s more than just a sports movie in this biopic about the clash between two tennis titans.

It’s the year 1973, after failing to fight for equal rights and equal pay for female tennis players, tennis champ Billie Jean King (Emma Stone) started her own tournament with her manager Gladys Heldman (Sarah Silverman) and at the same time, the married King begins a relationship with her hairdresser, Marilyn (Andrea Riseborough) in an era where homosexuality is a no-no for a competitive athlete.

The other half of the story focused on ex-tennis champ and compulsive gambler Bobby Riggs (Steve Carell). Upon seeing the rising King, Riggs hits upon the idea of challenging the current top woman player to a match. Calling himself a male chauvinistic pig, the restless 55-year-old Riggs finally gets to meet the 29-year-old King in the tennis court in a match that not changed the tennis world but proving that it’s not always a man’s world.

Coming from husband-and-wife Jonathan Dayton and Valerie Faris who gave you Ruby Sparks and Little Miss Sunshine, Battle of the Sexes unfolds predictably in their trademark quirky manner, adoringly captured the magic of the cast and story in the process. Packaged as a feel-good movie, the story is a mixture of humour, important messages about LGBT and the struggles of life.

Despite having a loving, supportive husband and a successful career, Billie Jean King is struggling with her sexuality while her constant arguments with tennis promoter and commentator; Jack Kramer (Bill Pullman) is not helping matters. The has-been Bobby Riggs has his own fair share of problems. He is going nowhere in his rich father-in-law’s company and his wife (Elisabeth Shue) is leaving him because of his addiction to gambling.

Oscar nominated actress Emma Stone is perfect as King. She is equally strong and vulnerable and Stone seems to be destined to play the part of Billie Jean King. Carell who is amazing in an earlier sports related movie, Foxcatcher while perfect in his role as the clowning hustler suffers from a limited screentime and obviously overshadowed by his far more dazzling co-star, Stone.

The well-written movie by Simon Beaufoy (who wrote Slumdog Millionaire and 127 Hours) balances drama and humour beautifully. It touches on taboo subjects which are amazingly still relevant over 40 years later. The production design, which portrayed an overall 70’s feel, is great although the entire movie still feels like an indie flick. Battle of the Sexes is a fun, semi-serious biopic which features two stars at the height of their career. Not forgetting the galore of supporting stars liked Silverman who lights up the screen the moment she appears with her Virginia Slim and Alan Cumming as King’s costume designer and adviser. 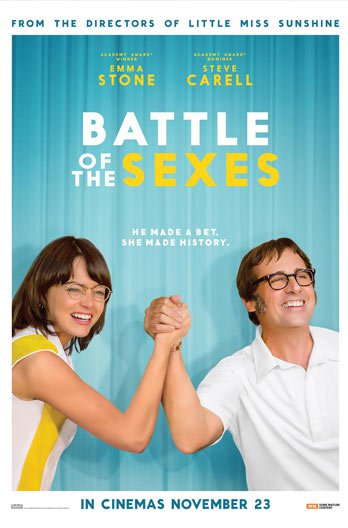