Synopsis: Marvel Studios presents “Avengers: Age of Ultron,” the epic follow-up to the biggest Super Hero movie of all time. When Tony Stark tries to jumpstart a dormant peacekeeping program, things go awry and Earth’s Mightiest Heroes, including Iron Man, Captain America, Thor, The Incredible Hulk, Black Widow and Hawkeye, are put to the ultimate test as the fate of the planet hangs in the balance. As the villainous Ultron emerges, it is up to The Avengers to stop him from enacting his terrible plans, and soon uneasy alliances and unexpected action pave the way for an epic and unique global adventure.

If the first ‘Avengers’ movie was about building the team, then this one is about tearing them apart.

Opening with a thrilling reminder of just how awesome the team of Iron Man, Captain America, Thor, Bruce Banner aka Hulk, Hawkeye and Black Widow that Nick Fury assembled can be, the superheroes follow the events of ‘Captain America: The Winter Soldier’ by paying a surprise visit to the Colditz-like castle hideout of Hydra operative Baron Von Strucker (Thomas Kretschmann) to retrieve Loki’s scepter. Savour the union while you can, for it isn’t long before that alliance is shattered with the arrival of the titular genocidal robot, which by virtue of being Tony Stark’s creation only serves to deepen the mistrust among them.

If you’ve read the books, you’ll know that Ultron’s foremost purpose is to put the Avengers in the ground – which in writer-director Joss Whedon’s interpretation, becomes a symbol of grand irony. After all, Ultron was Tony’s idea of creating an artificial intelligence which could protect mankind and so make the Avengers obsolete, a project which he happened to be working in secret with Bruce and his personal A.I. assistant Jarvis (voiced by Paul Bettany). Unfortunately for him, Ultron has taken the obsoletion of the Avengers quite literally, and determined for himself that the only way for mankind to survive is for it to be annihilated and thereby given a chance to evolve.

That the Avengers will face Ultron and his army of replicas is a given, but what truly surprises is the twisty character-driven narrative which Whedon weaves to get to that highly anticipated finale. You would already have heard of the high-profile additions Quicksilver (Aaron Taylor-Johnson) and Scarlet Witch (Elizabeth Olsen), a pair of tightly-knit Eastern European siblings whose powers of speed and mind control respectively lend their reference here as “enhancements” – and besides Ultron, the brother-and-sister pair become the most formidable threat to the Avengers, in particular the latter’s psychic powers which she uses on Captain America, Black Widow and Thor to trigger memories of their past and face their personal demons.

While their visions leave them distracted and unsettled, the rest of the team are also forced to confront their own fears. Tony’s hubris, once the driving force of his pioneering spirit, could very well be the end of the Avengers and the destruction of everything he’s tried to build. Bruce loathes his alter-ego, but recognises that his powers are still a valuable addition to the team, especially in protecting Black Widow, with whom he shares a deepening romantic interest hinted at in the last movie. And freed from the shackles of Loki’s spell, Hawkeye is reminded of his mortality as one with no special powers or metal suit other than being an excellent archer, beautifully portrayed in a sojourn at the halfway mark that he makes to his ‘safe house’ to visit his wife and kids along with the rest of his teammates to recuperate and re-group.

It is no small feat juggling so many characters in the same movie, and yet again, Whedon has pulled it off stunningly. Even though each is part of a larger team, no one fades into it; instead, Whedon lets us get to know each and every one of the Avengers intimately, so much so that you won’t feel that you know them any less than you would if they each had their own standalone movie. And out of that character emphasis comes some lovely human moments that make this more soulful and poignant than its predecessor – how Black Widow coaxes the Hulk back into human form, that Hawkeye is an All-American family man when not on superhero duty, why Ultron is really Tony’s darkest side in the flesh (or metal) gone amok, and fundamentally the burdens that each one of our superheroes carry as a consequence of their powers.

Besides Ultron, Whedon refuses to define any of the characters as “good” or “bad”; rather, he identifies and illustrates their drives and impulses – whether is it Tony’s phobia or Captain America’s old-fashioned sense of duty or even Ultron’s Oedipal grudge – and uses that to propel the story forward. This is ultimately how the team falls apart, going from the joviality of Thor’s favourite party trick (otherwise known as “who is fit to lift the hammer”) at the start to the infighting later on over Tony’s plan to create yet another superior A.I. to defeat Ultron – which ends up in the birth of the red-faced android named Vision (Bettany in the flesh). It is also how Whedon plots the reconciliation of the Avengers with their apparent arch-nemeses Quicksilver and Scarlet Witch, no doubt laying the foundation for the next phase of the Avengers programme – and the next two-parter instalment due three years later.

Being heavier on philosophy and introspection does take some measure of humour out of the Avengers, but that doesn’t mean this sequel has lost its witty brio. Tony still delivers the zingers in the way Robert Downey Jr does best, particularly in the scene where he goes metal-against-man with the Hulk, but he is at times upstaged by his own creation, given the same sardonic wit but with the diabolical elegance of James Spader’s voice. That said, there is much less of the lively banter that made the first movie such jovial entertainment, and in its place Whedon has created a different movie that is darker and grittier.

Only when it comes to matching the sheer jaw-dropping spectacle of its predecessor does this sequel become a victim of its own success. Despite hopscotching across the globe from Europe to Africa to Asia and back (culminating in the fictional East European country of Sokovia where it started), Whedon never quite achieves the same feeling of ‘wow’ that we had watching Loki take out S.H.I.E.L.D’s airborne headquarters or unleash hell from the sky onto New York City. Whedon manage to replicate that feeling of astoundment in the much-anticipated Hulk-versus-Hulkbuster sequence, but the next to follow set in and around downtown Seoul is a major disappointment for blurry CGI and bad continuity. And though he tries to replicate the exhilaration watching the whole Avengers fighting together as an entire team, Whedon doesn’t quite get our hearts leaping during the final standoff against hordes of replica Ultrons.

If the finale lacks the emotional payoff of the first movie, that’s also because Whedon had set himself up with a near impossible task in the first place. That probably explains why the ‘Age of Ultron’ is at its core a very different movie from the first ‘Avengers’, not just because of how our superheroes evolve in the face of imminent destruction precipitated by one of their own but also because of the complex psychological themes that Whedon explores here. His ambition is certainly admirable, but it is inevitable that those looking for the same straightforward thrills as its predecessor will be at least slightly disappointed. That it ends on a somewhat muted note is therefore to be expected, though that in no way diminishes Whedon’s achievement in any regard. This is still an outstanding feat by any measure, a riveting blend of intimate character moments and grand action spectacle that remains quite simply, Marvel-lous.

(In character and theme much darker and more complex a sequel than its predecessor, Joss Whedon creates yet another immensely satisfying Avengers chapter) 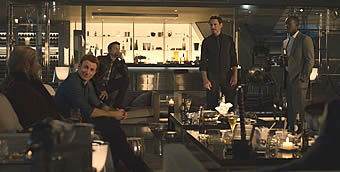 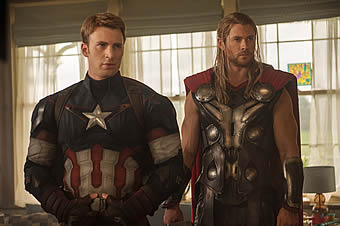 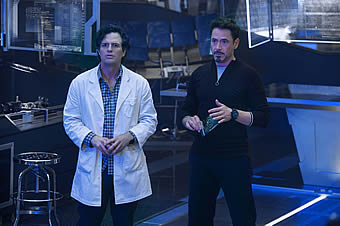