Synopsis: Min (Jacqueline Ch´ng), Lung (Sammy Sum), Keong and Fen are business partners of an online game design company, which is on the verge of winding up due to the lack of clients. Just as things start to get worse, a mysterious lady, Mrs. Wong (Paw Hee Ching) offers them a sizable sum of money if they could complete the final stages of her deceased son's online game – Ouija Board and launch it thereafter. They readily accept the business. Soon mysterious things happen and they experience ghost sightings…

We believe we have seen enough marketing ploys to know whether a product is, well, in this case, scary or not. The movie poster of this Wong Pak He directed horror thriller uses not one, but two of such tactics to lure audiences into the cinema.

First, the marketing folks tell you that the 87 minute movie stars three of Hong Kong’s creepiest aunties – Paw Hee Ching (Rigor Mortis, Special ID), Susan Shaw (SDU: Sex Duties Unit, As the Light Goes Out) and Law Lan (The White Storm, Overheard 3). Of the three, Law’s performance as ‘lung poh’, an eerie old lady in the Troublesome Night series (there are probably more than 15 of these movies) is one that sends chills down viewers’ spines.

As if throwing out big names isn’t enough, the poster finds space to tell you that the visual effects in this movie are from the same team who created Rigor Mortis (2013), an effectively bittersweet horror film directed by Juno Mak.

Fifteen minutes into the movie and you know there isn’t really anything to shout about. The story’s protagonists are a group of unlikable characters who have come together to form an online app company. They quarrel because of bad business, and when they are about to wind up their business, along comes a mysterious lady who wants to them resurrect her deceased son’s online game which did not see completion. The game takes the form of an ouija board, and needless to say, strange things begin happening to the group.

Jacqueline Chong and Sammy Sum portray a couple who are facing relationship problems because of his gambling addiction. The bigger stake here is her unborn baby. Jumbo Tsang plays a bimbotic woman who, well, does nothing much except wearing skimpy clothes and going on dates. Alan Luk is the last member of the group: he spends most of his time checking out online sites to look for prostitutes to spend his evenings with. Hmm, are we missing a feel good factor here somewhere? Not what you’d exactly call A listers, this four actors do the bare minimum to keep you interested in the story.

What about the three leading aunties whose names are plastered on posters to attract people to purchase tickets? Their effortless attempts at looking sinister and throwing cold stares remind you why they are veterans in the industry. Unfortunate thing is, their characters aren’t exactly the most developed. Paw is a mysterious woman who shows up, Shaw is an exorcist of sorts, and Law plays an actress who excels at playing an exorcist. Err, the screenwriters were not putting much effort into the script, were they?

The plot becomes predictable and almost repetitive after a while, and you definitely won’t be leaving the theatres feeling spooked. The usual themes of betrayal, revenge and karma are all in, with no innovative twist or approach to make this otherwise well shot movie stand out from the crop of forgettable horror movies. You may be better off renting those dated Troublesome Night movies to watch at home.

(The filmmakers were probably thinking of pulling a fast one by casting Paw Hee Ching, Susan Shaw and Law Lan in this mediocre horror movie) 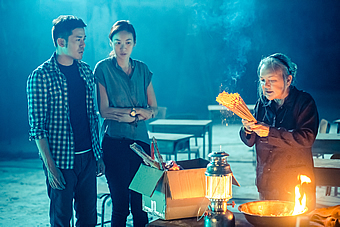