Synopsis: During the era of Economic Reform in China, 3 young hot-blooded idealists struggle to make a difference in life while striving to keep their dream alive. Their unconquered spirit transforms them from nobodies to the tutorial giants of a multi-billion dollar empire.

Never has there quite been a film which has so pointedly addressed China’s complex love affair with the West as Peter Chan’s latest work ‘American Dreams in China’, a presciently timed movie given the country’s rising power on the international stage. Tapping into the contemporary Zeitgeist of the Chinese pursuit of the American dream, it sees Chan revisiting his familiar themes of love and friendship as he charts the ups and downs of three college friends over three decades who build a business empire on an English-language school.

Beginning with the end, Chan introduces us to his protagonists - Cheng Dongqing (Huang Xiaoming), Meng Xiaojun (Deng Chao) and Wang Yang (Tong Dawei) - as they are called to New York to answer allegations by the United States’ Educational Testing System (ETS) that they had been using ETS material within their school curriculum without permission. Because this isn’t a whodunit, there isn’t any doubt that the allegations are indeed true; what remains to be seen however is how they got from chasing the American dream to selling others the pathway to make that dream a reality.

That story takes us back to their university days in the early 1980s during the era of the Economic Reform. Whereas Dongqing is a quiet and bookish country boy, his mates couldn’t be more different - Xiaojun, the de facto leader of the trio, is ambitious and self-confident, while Wang Yang is carefree and hedonistic. Yet all three are united in a common desire of going to America, a land perceived to be one of equal opportunities that rewards the hardworking; nonetheless, they will soon discover that passion alone ain’t enough - even after several rounds of interviews, only Xiaojun gets the student visa each one of them wants, leaving Dongqing and Wang Yang behind as he alone gets to live out their collective dreams.

Herein is where irony sets in. Still dejected from not being able to go to the United States, Dongqing instead takes up a job as an English teacher - but a not so good one at that at least at the start. With Wang Yang’s financial help though, he taps on his own thirst for making that journey to America to become a stirring motivator for countless others like him, thereby turning a hole-in-the-wall teaching establishment named New Dream into a profit-making enterprise. On the other hand, Xiaojun isn’t having such a good time in America, his seemingly bright and perfect future crashing down when he is sacked from his laboratory job and forced to work as a waiter at a restaurant under a bigoted Caucasian boss.

All that is packed into the first hour of the film, which uses frequent monologues and voiceovers to provide the narrative continuity necessary for such a sprawling tale. Yet even though the characters are defined well enough, their joys, disappointments and frustrations rarely stick, primarily because Zhou Zhiyong and Zhang Ji’s screenplay (based upon Aubrey Lam’s draft) doesn’t give Chan much breathing space in between the individual ups and downs to dwell on quieter character moments. And so, though we get Chan’s intention of painting a cautionary tale on ambition, idealism and reality, it ultimately rings a little too hollow, coming off more superficial than poignant.

Thankfully, the movie finds a surer dramatic footing in its second half as Xiaojun heads back to China to join his buddies to bring New Dream to greater heights. Illustrating how business interests can sometimes ruin the firmest of friendships, Chan patiently observes Dongqing and Xiaojun’s conflicting goals for the company, exemplified particularly in the latter’s insistence of - and the former’s resistance against - an IPO launch on the New York Stock Exchange. At its most effective, Chan’s story is a coming-of-age tale of three friends whose bond is tested by power, money and ambition - though it does take a longer time than it could have to reward audiences with an emotional payoff.

It is also for this reason that despite Chan’s attempt to emulate the success of his ‘Comrades, Almost A Love Story’ - right down to framing the tale against memorable events in China’s history such as the first KFC in 1992 and the bombing of the Chinese embassy in Belgrade in 1999 - this supposed true story of the Beijing New Oriental School isn’t quite as accomplished. There’s also no denying the political subtext of the film, expressed in no unclear terms by Dongqing in a didactic speech that in a nutshell demands that the West pay more respect to China and its people - in the hands of a lesser filmmaker, we might have excused it as ineptitude; but in Chan’s case, one can only conclude the heavy-handedness comes from a deliberate attempt to pander to Mainland audiences.

Still, to give credit where that’s due, Chan does get career-best performances from his Mainland stars. Made to downplay his good looks, Huang Xiaoming puts aside his swagger and is nicely understated as the shy Dongqing who comes into his own as a firm and resolute personality along the course of the film. Deng Chao projects just the right amount of poise without becoming supercilious, and surprisingly emerges as the most empathetic of the lot especially as his self-confidence takes a beating. Though he gets slightly less attention than Huang and Deng, Tong Dawei is also extremely likeable as the most good-natured of the three.

In them and their characters is probably where Chan also sees himself. After all, it’s not hard to see why Chan shares his film’s mix of ambivalence towards the West - the filmmaker’s own foray in Hollywood following his UCLA film degree was the Dreamworks flop ‘The Love Letter’, which gave him the need for pause before he bounced back with ‘Perhaps Love’ six years later. It’s no secret that Chan now has his eyes firmly on the China market; nonetheless, Chan’s strengths as a filmmaker still triumph over his commercial sensibilities, and even if this latest isn’t as compelling as it could have been, it is at least never less than engaging. 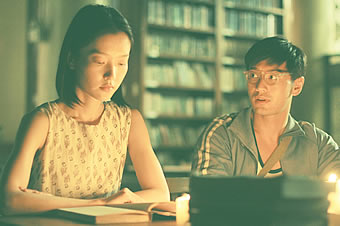 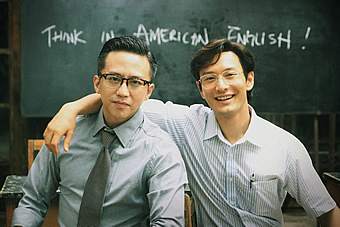