Synopsis: Over one day across the streets of L.A., three lives will change forever. In this breakneck thriller from director - producer Michael Bay, decorated veteran Will Sharp (Emmy winner Yahya Abdul-Mateen II, Candyman, The Matrix Resurrections), desperate for money to cover his wife’s medical bills, asks for help from the one person he knows he shouldn’t — his adoptive brother Danny (Oscar ® nominee Jake Gyllenhaal, Zodiac, Spider-Man: Far From Home). A charismatic career criminal, Danny instead offers him a score: the biggest bank heist in Los Angeles history: $32 million. With his wife’s survival on the line, Will can’t say no. But when their getaway goes spectacularly wrong, the desperate brothers hijack an ambulance with a wounded cop clinging to life and ace EMT Cam Thompson (Eiza González, Fast & Furious Presents: Hobbs & Shaw, Baby Driver ) onboard. In a high - speed pursuit that never stops, Will and Danny must evade a massive, city-wide law enforcement response, keep their hostages alive, and som ehow try not to kill each other, all while executing the most insane escape L.A. has ever seen.

You would be familiar by now of the trademarks of a Michael Bay film, including the lens flares, Dutch angles and rapid cutting. And indeed, right from its pre-credits sequence depicting how close Danny and his adopted brother Will were as kids, these signature elements are on full display. Make no mistake therefore, ‘Ambulance’ is undisputedly a Michael Bay film, and while that often means both for better and for worse, we’d like to think in this case it is ultimately for the better.

Adapted from a 2005 Danish film of the same name, Bay and screenwriter Chris Ferak retain the high-concept premise of a pair of bank robbers who hijack an ambulance after their heist goes awry, but shifts the setting to downtown Los Angeles for good measure. Not since the classic 1994 chase movie ‘Speed’ have we seen LA used in such similar fashion, and sure enough, Bay channels the grittiness of LA to good measure, be it the city streets, freeway corridors, concrete water channel (otherwise known as the LA River) and even residential neighbourhoods, so much so that we dare say LA is a character in and of itself within the movie.

Though clocking in at over two hours, the pace is fast, frenetic, and sometimes even exhausting from start to finish. Unfolding wholly over the course of a single day, it wastes no time setting up the key leads. Danny (Yahya Abdul-Mateen) is now a decorated veteran, but struggles to get the money his wife needs for her surgery. Will (Jake Gyllenhaal) has followed in his father’s shoes and become a career criminal, and is now about to execute the biggest heist in LA history. And then there is Cam (Eiza Gonzalez), a no-nonsense paramedic whose professionalism on the job has turned her apathetic to the people she is saving.

When he turns to Will as a last resort, Danny gets pulled into the score Will has been planning. Yet what was meant to be a straightforward robbery goes downhill when rookie cop Zach (Jackson White) shows up at the front door to try to ask a bank teller he has had a crush on for her number. Bay goes ballistic on the subsequent melee, with intense firefights, vehicular crashes and brutal fisticuffs as the robbers contend with not just your regular LAPD officers but also an elite squad within the LAPD known as the Secret Intelligent Services (SIS). Long shoot-out short, Danny and Will find themselves fleeing in a Falck ambulance, with Cam and a wounded Zach in the back.

What follows is a cat-and-mouse game between Danny/ Will and Captain Tyler Monroe (Garret Dillahunt) of the SIS, with FBI Special Agent Anson Clark (Keir O’ Donnell) joining the latter later on to add some brains to the brawn. Among the memorable episodes are a life-saving operation that Cam performs on Zach at the back of the moving ambulance, a miscalculated SWAT ambush, a thrilling chase along the LA River, and an elaborate misdirection with lethal consequences. Say what you will about Bay, but the action here is top-notch.

Even though he doesn’t always succeed, Ferak deserves credit for the character work amidst the Bayhem. Whilst Danny is torn between doing the right thing and loyalty to his brother, Will has to decide whether to still trust Danny or do what may be brutally necessary. The push-pull between them gives the film a strong emotional anchor, thanks to Abdul-Mateen and Gyllenhaal injecting real stakes into their respective characters. Cam’s presence often sharpens the dilemma both brothers face, and Gonzalez shrewdly calibrates her supporting act to complement the performances of her two male co-stars.

As impressive as the writing and acting may be, the draw of ‘Ambulance’ is undoubtedly still the propulsive action that a Michael Bay film promises, and like we said earlier, Bay doesn’t disappoint in that regard. The trademarks are still there, but the material sees Bay operating at probably his most grounded and restrained in recent time, dispensing with the cringe-worthy humour of ‘Transformers’ and even the stylistic excesses of say ‘6 Underground’. It is ultimately a throwback to the sort of straightforward action films of the 80s and 90s, and utterly enjoyable if all you are looking for is an adrenaline rush. 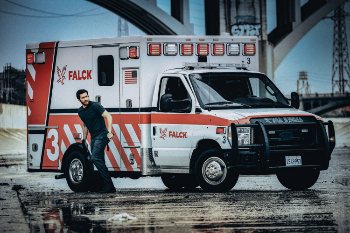