Synopsis: A drama centered on the long-term friendship and partnership between two cops.

No one in the last decade has made them gritty cop dramas quite like David Ayer, whose name you will find behind genre classics like ‘Training Day’, ‘Harsh Times’ and ‘Street Kings’. At the risk of being typecast, Ayer returns to the genre once again with ‘End of Watch’, a buddy cop movie set in one of the toughest precincts of Los Angeles’ South Central neighbourhood – and his return to familiar ground (more so given that he had grown up in the hood) sees him at his personal best, delivering a searing cop story that is riveting and heartfelt.

Too many Hollywood fictionalisations of the LAPD have portrayed it as corrupt and inefficient – even Ayer’s ‘Training Day’ is guilty of the same cliché – but ‘End of Watch’ thankfully doesn’t fall back on the same narrative conventions. Indeed, its two protagonists whom we watch as they go about their daily patrolling duties – Brian Taylor (Jake Gyllenhaall) and Mike Zavala (Michael Pena) – are just regular cops on mean streets, the latter’s lethal concoction of dope running, gang wars and rampant poverty making it one hell of a job for even two street-smart officers like Brian and Mike.

They represent the unsung heroes of the LAPD, and Ayer’s portrait of them here is dignified yet realistic. He deliberately avoids playing up their heroics even when he can – a daring rescue of three children trapped in a burning house is an excellent case in point – but isn’t afraid to show them bending the rules – in one notable scene, Mike removes his service weapon and dukes it out mano-a-mano with a belligerent citizen (Everton Lawrence) who refuses to play easy. Rather, Ayer aims for a straightforward, almost documentary-like, telling that lets his audience be the judge.

Central to the tale is the camaraderie between Brian and Mike – the former an ex-Marine with a tendency to take charge and barrel into any situation; the latter a born and bred home boy more easygoing but no less ready to dive into the thick when the situation demands – and a lot of time especially in the first two-thirds of the movie is spent listening to the back and forth between the pair while cruising in their squad car. Their conversations revolve around anything and everything, and through their banter, we come not just to care and fear for them but also to respect the bond that exists between them – not just a simple one of brotherhood, but one strong enough to make either lay down his life for the other.

Like real cops too, both have families to go back too, and Ayer spends some time acquainting us with their personal lives as well. While Mike is looking forward to the birth of his first child with his teenage sweetheart of a wife Gabby (Natalie Martinez), Brian is looking to tie the knot with Janet (Anna Kendrick) – and some of the more heartfelt talk between them has the former sharing his experience as a married man with the latter.

We should warn you at this point therefore that this is a film as much about action as it is about talk, and like we said earlier, the best parts of the movie are not when Brian and Mike are pulling out their guns, but when both are just kicking back inside the cruiser, razzing each other on the day’s watch. We should probably also warn you that this isn’t a plot driven film where there is some bad guy both go rogue hunting down – instead, the movie finds its rhythm chronicling the day-in and day-out of police work. True to the unpredictable nature of the job, Ayer takes an organic approach to the storytelling – and just as Brian and Mike aren’t quite sure what will happen this day or the next, so too are we kept largely unaware of what comes next for the duo.

Only during the last third does Ayer fall back on more familiar tropes, as Brian and Mike become targets of a ruthless Latino gang with links to Mexico’s Sinaloa drug cartel after repeatedly stumbling upon their myriad criminal activities – in particular drug and human trafficking. Yet even as the movie barrels towards a heart-thumping finish, Ayer stays true to the low-key nature of his heroes – and we watch with our hearts in our mouths as Brian and Mike are outnumbered and outgunned by the fearsome crew with names like Big Evil (Maurice Compte), Wicked (Diamonique), La La (Yahira Garcia) and Demon (Richard Cabral).

The resolution is only as powerful because Gyllenhaal and Pena have made it so. Both actors easily put in their one of their best performances here, going as far as to inhabit their respective characters with gusto and fervour. They also share great chemistry with each other, and it is to their credit that this exploration of their friendship turns out deep and utterly convincing. Speaking of authenticity, Ayer also injects realism into the narration with jittery cinematography that draws his audience into the hyped-up everyday reality of his characters – and a particularly nifty plot device is Brian’s insistence on documenting their happenings on the beat for his night school film study classes using a small handheld HD camera, allowing therefore a first-person perspective of what he sees on the job.

So often, the faux found-footage technique is employed as a stylistic gimmick, but Ayer manages not only to utilise it effectively but to justify its use as part of the story element. From the filming to the scripting to the acting, every part works together like clockwork to deliver a gritty visceral experience of what it means to be a cop up against some of the toughest inner-city crime-infested neighbourhoods. It is a must-watch not only because it honours the real men and women who place their lives on the line every day, but also because it corrects that misperception of the force that Hollywood has perpetuated time and time again.

(Gripping, visceral and unexpectedly heartfelt, this searingly intense cop drama both sharply directed and electrifyingly played is one of the best of its genre) 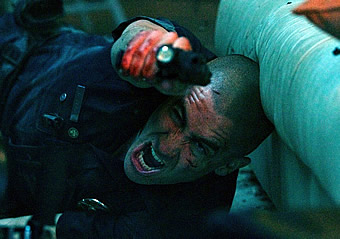 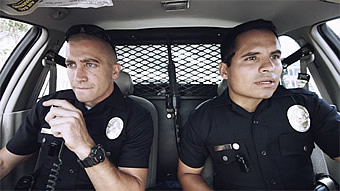 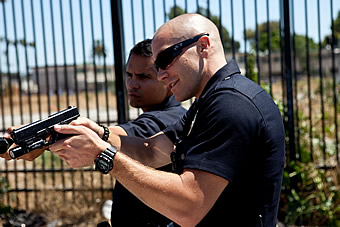 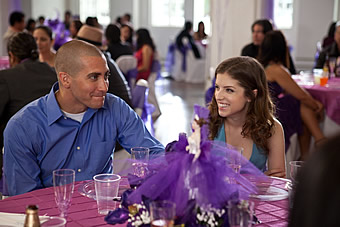 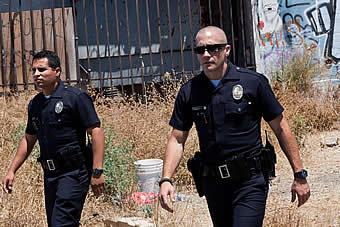 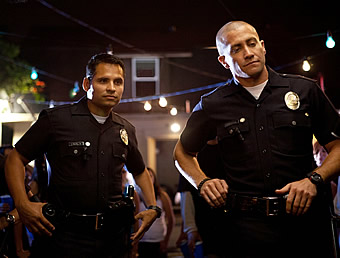