Synopsis: Jules Willcox (Netflix’s BLOODLINE) stars in ALONE as Jessica, a grief-stricken widow who flees the city in an attempt to cope with the loss of her husband. When Jessica is kidnapped by a mysterious man and locked in a cabin in the Pacific Northwest, she escapes into the wilderness and is pursued by her captor. The key cast includes Marc Menchaca (OZARK, THE OUTSIDER) and Anthony Heald (THE SILENCE OF THE LAMBS).

After the death of her husband, Jessica (Jules Wilcox) packed up everything in a U-haul and leaves the big city only to encounter a deadly stalker in a SUV.

Like it or not, that’s more or less is the entire premise of Alone.

Adapting from his original 2011 Swedish movie, Gone is Mattias Olsson and the helmer is John Hymas known for resurrecting the Universal Soldier franchise. There’s nothing fanciful about the flick in fact it’s so minimalistic that for most of the screentime we only see the two main leads playing a cat-and-mouse game in the vast forestry area of Portland Oregon.

In the beginning, we just see the mysterious man slowly creeping his way into Jessica’s life as if it’s a well-deserved distraction for the recent widowed lady. The Man later on as we learnt that he is called Sam finds all sort of excuses to get close to Jessica from pretending that his SUV has broken down to taking a toilet break. Of course, everyone including Jessica knows the man with a nerdy pair of glasses and pornstache is up to no good.

At this point, we are just waiting for Jessica to be capture. How and when? There wouldn’t be much of a story if she stayed in her slow crawling wagon all the time isn’t it? Jessica’s plight is a story we all know. As we worry about Jessica, we are also confident that she is going to get back at Sam sooner or later.

But at times, the actions of Sam are too unbelievable to be true. For one, he seems way better than a police sniffer dog capable of tracking Jessica through thick forest and river. Unless he is an ex-forest ranger else we don’t really believe he is that capable. However, watching the hurt and abused Jessica getting back at her attacker after the untimely demise of a good Samaritan is genuinely satisfying.

Alone offers limited character development. We don’t really know much about Jessica except she just lost her beloved husband. Sam on the other hand is presumably a family man on a supposed business trip. This is not exactly a story that is heavy on plot, a point we mentioned earlier.

The movie offers a lush cinematography by Federico Verardi despite the shoestring budget and similar to Elisabeth Moss in The Invisible Man, Jules Wilcox delivers a top-notch performance as an abused victim who fights back in the end. It’s not a particularly memorable flick but for fans who love the genre will definitely find this nail-biter a thrilling experience.

(Taut and lean, Alone is gripping for all its worth) 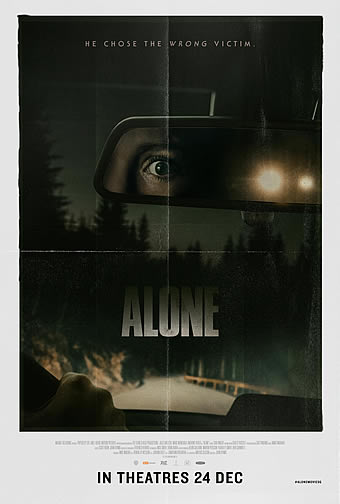 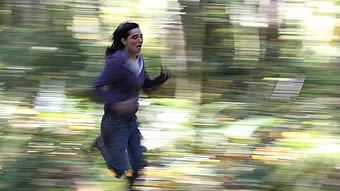 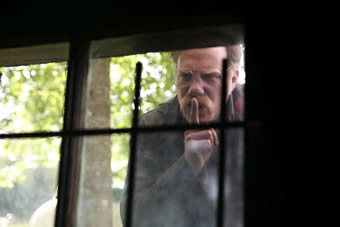 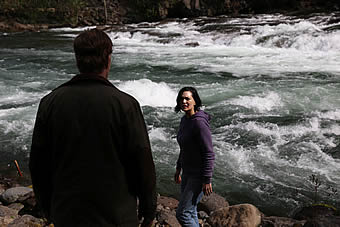 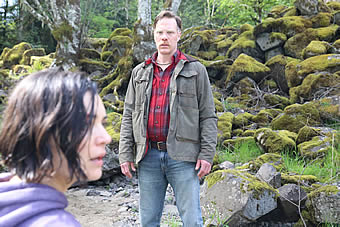