Synopsis: When veteran 911 operator, Jordan (Halle Berry), takes a life-altering call from a teenage girl (Abigail Breslin) who has just been abducted, she realizes that she must confront a killer from her past in order to save the girl's life.

Emergency call operators have it tough: it’s a tremendously stressful job, demanding calmness and quick thinking that could make the difference between life and death. In The Call, Halle Berry stars as Jordan Turner, a 911 call operator with the Los Angeles Police Department traumatised by an SOS from a kidnapped girl that ended on a grisly note due to a mistake on Jordan’s part. Deeply rattled by the loss, she keeps a picture the victim in her locker, a silent reminder of what keeps her away from the frontline as she falls back on a more logistical role of coaching new staff. Jordan clinically dishes out advice on how to handle the job: never get too personal, never make promises you can’t keep. Whenever anyone in a brittle state makes absolute statements in this vein, it’s just a matter of time before they do precisely what they preach against.

The day comes when Jordan makes the decision to step in for an inexperienced colleague struggling with a particularly challenging call for help. The dread mounts, like a recurrent nightmare, when she realises it’s yet another young girl screaming for her life in the middle of an abduction, but this time Jordan’s determined to get the victim Casey (Abigail Breslin) out alive. She keeps Casey on the line for as long as possible, drawing clues on the girl’s location through Q&A while advising her on resourceful ways to get help, despite being locked in the trunk of an unidentified car. They’re on the move, she’s using a phone that can’t be tracked via GPS, and everyone’s trying their darned hardest to pin down the location of the kidnapper. Both women are caught in tight spaces, trying to reach beyond their enclosures.

Up to this point, The Call’s level of suspense is still high, its tension taut. Brad Anderson’s expertise in crafting tense thrillers such as his best-known work The Machinist (a cult favourite which starred an emaciated Christian Bale) is evident until the moment Casey and her kidnapper (Michael Eklund) get off the highway and into the woods. To minimise spoilers, let’s just say that it moves into territory that could possibly be described as ‘soft torture porn’ with a storyline that is mired in quicksand. If you find yourself asking seemingly obvious questions about why certain characters act the way they do, don't expect any adequate answers. As the show progresses, its pacing and logic quickly unravel and the ending unfortunately feels like a cut-and-paste job.

The two female leads, one an Academy Award winner and the other a nominee, are easy to root for. As a dedicated and empathetic 911 call operator, Berry does a fair job as a tough cookie who keeps it together amidst overwhelming odds. Breslin, on the other hand, doesn’t need to stretch her acting chops much as a frightened teenager caught in the wrong place at the wrong time.

(Despite its promising premise, The Call is best left as a missed one) 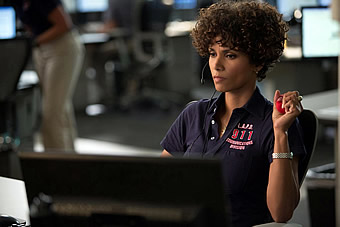