Synopsis:  WHAT IF, in the unforeseen future, when there are not enough boys in Singapore? If Girls haveto serve National Service also, what will happen? The story will focus on the first batch of female recruits, a bunch of Gen Z teens and youngsters with different backgrounds and education. As they trained under the fierce leadership of Sergeant Chow and Lieutenant Roxanne, they find themselves being pushed to the limit of their potential. Together, they overcome hardship and initial resistance to serve NS and discover newfound abilities, using it to solve and mend relationships in their personal life as well.

With a combined box office of over $20 million, ‘Ah Boys to Men’ is easily the highest-grossing Singaporean franchise of all time. Is it any wonder that Jack Neo has tried various means to keep it alive, including licensing it as a web series set in the workplace? Neo’s latest formulation sees him do a gender switch, imagining what it would be if due to the continued decline in birth rates, Singapore would have to call upon its female residents to serve National Service. The idea itself is intriguing, but sadly wasted under Neo’s shallow scripting and even worse direction, so much so that ‘Ah Girls Go Army’ is probably the worst entry of the series thus far.

Like the first ‘Ah Boys’, this one follows the progress of a group of recruits conscripted into Basic Military Training - or Girls BMT (GBMT) in this case. In place of Tosh Zhang’s Second Sergeant Alex Ong, we have the similarly stern but caring Second Sergeant Chow CK (Glenn Yong) as the platoon sergeant, reporting to 2LT Roxanne Tan (Apple Chan) as the platoon commander. The recruits themselves come in different shapes and sizes, including a mollycoddled Princess See (Ke Ke), a heartbroken Joey Tay (Belle Chua), a single mum Yuan Yuan Yuan (Xixi Lim), a bossy Lau Lan Lan (Charlene Huang), and a straightlaced Goh Bee Bee (Samantha Tan).

Notwithstanding the theme, Neo is hardly the most progressive filmmaker, and the jokes here are proof yet again of his worst tendencies. Between Princess See hamming it up with her Hokkien-accented English, Joey fantasizing about SGT Chow like a scene out of ‘Descendants of the Sun’, a recruit with a name like Monica Chng (Juliet Hor) and jokes about Yuan Yuan’s rotund size, Neo demonstrates a misogynistic streak right from the start that is continuously reinforced over the course of an excruciatingly two hours.

How else are we to make of Monica expressing concern over what will happen to her skin if she applied camo cream on it during camouflage lesson? Or the recruits deciding to impress their instructor with their method of taking cover using a pixelated patterned umbrella? Or worse, the recruits giggling over the army hand signal for ‘hurry up’ as if it were an obscene gesture? Oh yes, unless you think that a Special Obstacles Cockroach Course (SOCC) is a clever reinvention of today’s Standard Obstacle Course, those hoping for a smart or simply realistic take on what a female-centric NS could be can look elsewhere.

For this reason, ‘Ah Girls Go Army’ ultimately has no raison d'être. To see females struggling to adapt to today’s Basic Military Training is a lousy excuse for a movie – not only are females who join our Singapore Armed Forces (SAF) today already proving that they can train as well as, if not better, than men, it is simply commonsense to expect that there would be certain modifications to a so-called GBMT should conscription be imposed on all females too (and no, we’re not talking about an SOCC, which is frankly yet another reminder why this movie is itself a joke).

In the absence of any meaningful study on its titular subject, what is left is no more than high-school drama material. There is jealousy between the gangsterish Recruit Lau Lan Lan (Charlene Huang) and Princess See, after the latter threatens her wellness product business amongst the other section mates (no thanks to Holistic Way’s sponsorship of the movie); there is also Joey’s suicide attempt after getting blamed by her buddies for freaking out over a snake in the woods during a toilet break outfield, while being continuously ignored by her boyfriend (who is implied to be dating 2LT Tan by sheer nonsensical narrative coincidence); and last but not least, there is a fight within the bunk when the girls blame one another for looking out for their individual selves during SOCC. Frankly, if we wanted to see catty, we’d much rather watch ‘Mean Girls’ all over again.

To top it all off, the movie ends on a dreadful note promising a second-parter – much like how ‘Ah Boys to Men’ and ‘Ah Boys to Men 2’ were structured, ‘Ah Girls Go Army’ only covers the first half of their GBMT, with the second half teased in a trailer that doesn’t promise any better from what you would have sat through. We sympathize with the cast, which to their credit, do their best to be convincing in their respective roles in uniform; unfortunately, the cast of mostly first-time actresses are let down by Neo’s lackadaisical filmmaking, whether as screenwriter or director, and are stuck in scenes which are embarrassing and sometimes even vexing to watch.

Perhaps the only consolation here is that ‘Ah Girls Go Army’ makes clear from the start that it is completely a work of fiction, and that it was filmed without the support of the SAF (unlike the earlier four ‘Ah Boys to Men’ movies). Even if you had enjoyed the earlier films as we did, you’d find this spinoff unnecessary in every way, and for that matter, not even as throwaway entertainment during the Chinese New Year season. It is no laughing matter when females are called to serve NS as a result of population decline, as a prologue involving a debate in Parliament emphasizes, but there is no other way to see this film than as an utter joke.

(From boys to men and now on to girls, this spinoff is witless, charmless and pointless) 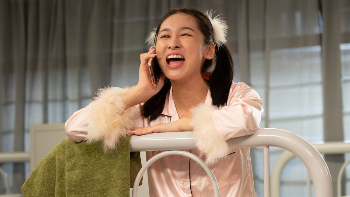