Synopsis: In January 1987, a 22-year-old college student dies during a police interrogation. Under the orders of Director Park (KIM Yoon-seok), the police request the body to be cremated in order to destroy evidence. Public Prosecutor Choi (HA Jung-woo), who was on duty on the day of the incident, denies the request and calls for an autopsy. The police maintain the lie that the death was a simple accident, resulting from shock. The autopsy results, however, point to torture as the cause of death. Yoon (LEE Hee-jun), a journalist following the case, reports that the death was a result of asphyxiation during torture. Director Park attempts to conceal the truth by ending the case, arresting two detectives including inspector Cho (PARK Hee-soon). While in prison, inspector Cho reveals the truth to prison guard Han Byung-yong (YOO Hai-jin), who embarks on a dangerous mission to relay the information to an opposition politician through his niece, Yeon-hee (KIM Tae-ri).

As significant as they were, the series of protests last year and the year before that precipitated President Park Geun-hye’s resignation were nowhere as momentous as that three decades ago. That was the year 1987, when people from all walks of life rose up against the military dictatorship of ex-President Chun Doo-hwan and clamoured for the right to fair and free democratic elections. The spark that ignited the flame was the accidental death of student activist Park Jong-chul at the hands of the government’s powerful Anti-Communist Investigations Bureau (ACIB) on January 14, and it is also the starting point of director Jang Joon-hwan’s sprawling, multi-character procedural that chronicles the chain of events over the next six months leading up to what has been dubbed the June Struggle.

Less character- than plot-driven, the swiftly-paced drama cycles through an assemblage of characters whose presence or absence at specific points of the film is based solely on how much they contribute to what is happening at that point in the story. So in succession, the story moves from: the cynical, fed-up prosecutor Choi (Ha Jung-woo) who refuses to sign a warrant authorizing Jong-chul’s instant cremation without an official autopsy; the equally defiant journalist Yoon (Lee Hee-jun) whom Choi tips off about the student’s true cause of death (note: it was the ACIB officers’ waterboarding techniques that led to his drowning, and not a ‘heart attack’ as the police coroner claims at a press conference); the prison guard Han (Yoo Hai-jin) who smuggles notes scribbled by a former journalist locked up in the same facility as two ACIB officers ‘nominated’ to take the fall for the student’s death; and last but not least the female college student Yeon-hee (Kim Tae-ri) who experiences a political awakening after being unwittingly caught up in the fierce, even indiscriminate, crackdown by the authorities on student protests against Jong-chul’s death.

No one character features throughout the movie, with the exception of ACIB chief Park Jeol-won (Kim Yoon-seok) who is seen browbeating Choi, orchestrating the media blackout of Jong-chul’s death, threatening his former staff to keep their mouths shut in jail and last but not least, trying but failing to control the massive public fallout. To be sure, it isn’t easy keeping up with the primary characters mentioned above and more than twice that number of secondary characters – though some, such as the boyishly handsome university activist Lee Han-yeol (Gang Dong Won) whom Yeon-hee is besotted with, could very well be excluded without losing much. While Jang’s intent to credit the real-life persons whose actions in one way or other contributed to the democratic revolution is noble, the title cards which pop up each time any one of them appears is less clarifying than confusing and distracting.

Even as the film bounces from character to character, Jang and his screenwriter Kim Kyung-chan’s keep a firm, tight and confident grasp of the plot. At no point does the sequence of interlocking events become muddled, and Jang maintains a tense, propulsive momentum throughout the film’s two-hour duration. For the most part, Jang maintains an impartial focus on the proceedings, refraining from outright sympathy for the underdog heroes who dared to defy authoritarianism. Though some may prefer a less clinical view, the artistic decision to avoid positioning the film as social advocacy ultimately serves it better by allowing its audience to come to their own conclusions about the people and their respective circumstances. That said, the last act does go off on tangents which threaten to overshadow the significance of the larger national movement, but Jang brings the various threads to a rousing finish despite some unnecessary melodramatic detours.

Not often do you see as big an ensemble of notable character actors in a single Korean movie, but ‘1987’ excels from a strong suite of performances throughout. Ha is delightfully wry as the prosecutor who decides he’s had enough of the ACIB bullies. Yoon cuts a sympathetic figure as the guard who makes the conscious decision to stand up for what he feels is right despite the toll he sees it takes on his family. But perhaps surprisingly, the one who leaves the most lasting impression is Park, whose portrayal of the former Commie turned ACIB chief starts off suitably intimidating given his tendency to bend the law to his will, and yet concludes with surprising empathy at his fierce and indomitable protection of his men.

You can tell that there has been great care in ensuring the authenticity of the retelling, and the result is gripping cinema verite of a historic turning point in the country’s history. Jang’s third feature film following the stylized ‘Hwayi’ and the quirky ‘Save the Green Planet!’ is as different as can be from his previous films, but is easily his most ambitious and most accomplished one yet. It takes skill, ingenuity and meticulousness to corral the series of inter-related events into a cohesive whole, but Jang has managed to fashion a gripping chronology that illuminates the circumstances, choices and consequences that eventually snowballed into an entire regime change. Especially as the contrast between the two Koreas comes into sharper focus in recent time, ‘1987’ is an important, insightful and invaluable reminder of how the South broke free of the shackles of dictatorship.

(Unfolding like a procedural of the series of events that ushered in the current era of democracy in South Korea, '1987' is a gripping multi-character political drama brought to life by one of the best acting ensembles in Korean cinema) 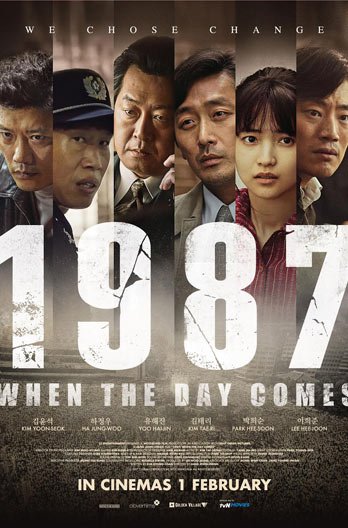