Synopsis: May 1980. A Seoul taxi driver named Man-seob (SONG Kang-ho) comes across an offer too good to be true. If he drives a foreign passenger from Seoul down to Gwangju and back again before the curfew, he’ll be paid the unthinkable sum of 100,000 won – enough to cover several months of unpaid rent. Without stopping to ask the details, he picks up the German reporter Peter (Thomas Kretschmann) and sets off along the highway. Although stopped by police roadblocks at the edge of Gwangju, Man-seob is desperate to earn his taxi fare, and eventually manages to find a way into the city. There they encounter students and ordinary citizens taking part in large-scale demonstrations against the gov¬ernment. Man-seob, alarmed by the danger in the air, pleads with Peter to go quickly back to Seoul. But Peter ignores him, and with the help of a university student Jae-sik (RYU Jun-yeol) and a Gwangju taxi driver named Tae-sul (YOO Hai-jin), begins shooting with his news camera. As time passes the situation grows more and more serious, and Man-seob keeps thinking of his young daughter at home all alone.

Other than in South Korea, and for people in that region during May 1980, not many may have known about the Gwangju Uprising, where hundreds, and some witnesses suggest thousands, of civilians were massacred during demonstrations against a military coup.

This state secret back then would have gone undocumented, if not for Jürgen Hinzpeter, a German reporter who risked his life to enter the lockdown area and capture uncensored footage of the killings. Part of his success also rested on an unlikely middle-class citizen - his Seoul taxi driver.

Jang Hoon spins the real-life tale into A Taxi Driver - where a self-centered cabbie, Kim Man-seob (Song Kang-ho), awakens to his heroic nature when he witnesses the bloodbath of his fellow countrymen during an unforeseen job.

The film starts by establishing the mercenary nature of Man-seob. He makes illegal u-turns just to avoid demonstrations because time is money for the efficient driver. When he heads home, we find out why - the widower is badly behind on his rent and is barely fulfilling his fatherly duties to his plucky young daughter. So he does what any logical person would do; borrow from his landlord - the shameless survival instinct is strong in this one. A good thing as he will require all of it in what happens next.

At an eatery, Man-seob overhears a private driver boasting about a job ferrying a foreign customer to Gwangju for a large sum of money, and the rascal feigns to be the assigned driver and picks up our reporter Jürgen (Thomas Kretschmann), who’s operating under the alias of Peter.

Motivated by the payout, Man-seob uncharacteristically jumps through risky hoops, past military barriers, into Gwangju, where he finds out the truth behind the lockdown.

A Taxi Driver has won many awards, including 4 “Best Picture Award” at international film festivals. It’s not hard to see why. It’s got a great premise, featuring two disparate characters building an unlikely bond, while facing and uncovering one of South Korea’s more horrific historical events.

Director Jang Hoon has displayed a deft hand in this movie. He approaches the grim affair with enough reverence, yet leaving details out to make it a more universal story of people versus power. He explores relationships between the characters, including a cheery student protester Gu Jae-sik (Ryu Jun-yeul) and a kindly Gwangju taxi-driver Hwang Tae-sul (Yoo Hai-jin), to evoke sympathetic emotions, but also launches us into grand stirring scenes of the crowd and how they band against a tyrant force.

All the actors bring it home with their performances, and even the occasional appearances by a protester becomes memorable when they later reappear. Song and Kretschmann though, do suffer a little at their own individual revelations.

I was never sure about Peter’s motivations at the riots. His initial decision seemed abrupt, then later noble, and yet during a dinner at his home stay with Tae-sul, he answers that question being financial. For an experienced reporter, he doesn’t seem very aware of his surroundings as well. He oddly chooses to film at open areas, putting his companions in danger from the military, including a persistent undercover agent. When he realises the extent of carnage in one scene, his breakdown seems unnatural and a convenient device for Man-seob’s return.

Man-seob fares a little better. His awakening is more nuanced, and Jang Hoon uses the veteran’s acting well to elicit emotional links from inanimate objects. However, the unwavering heroism he shows later does feel a little one-dimensional, pulling away some quotient of believability.

But A Taxi Driver has added a reasonable and helpful piece of fiction to the Gwangju Uprising event, and as far as a good story goes, completes the mission.

(A fictional retelling of the Gwangju Uprising focuses on two main actors, and is a well-balanced ride through one of South Korea’s darker events) 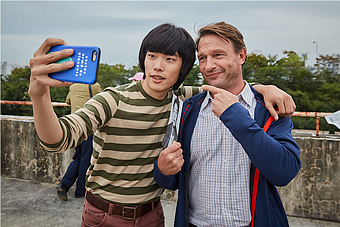