Synopsis: When a joint exhibition of the famous Yuan Dynasty scroll "Dwelling in the Fuchun Mountains" attracts the attention of nefarious art enthusiasts on the international black-market, both Yakuza and English thugs scramble to steal it. Xiao Jinhan (Andy Lau), an Interpol agent with a tainted past, is assigned to the mission entitled "Art of War." He determines to do anything to protect the scroll and clear his name. Meanwhile, PICC agent Lin Yuyan (Zhang Jingchu) is also entrusted with the task of protecting the masterpiece, but things soon get much more personal than she bargains for. Sent by the Yakuza to seduce Xiao Jinhan, the mysterious temptress Lisa (Chiling Lin) is every man’s dream: a Carmen and a chameleon; but deep down inside she is empty and lonely. The mastermind behind this Yakuza operation is the coldblooded criminal Toshio Yamamoto (Tong Dawei), who spares no expense exploring the depths of depravity to indulge his sadism. He too will stop at nothing to possess the painting. Xiao's adventure will take him over seas and across deserts. Will he accomplish his mission and clear his name? Will Lin Yuyan and Xiao find their lost love on the banks of Hangzhou's romantic West Lake? Lisa might be able to escape almost certain death in Dubai, but will she escape the fate that Toshio has planned for her and find a new life outside his manipulative grasp? The outcome of this battle to the death, one fueled by both love and hatred, will be revealed as we unfurl the scroll "Dwelling in the Fuchun Mountains."

Originally scheduled to be release last October but delayed due to problems with heavy post-production work, not to mention countless editing by the director, the end result is at best a patchy piece of work passing off as a Chinese version of Mission Impossible: Ghost Protocol.

You might think this is going to an exciting, jaw-dropping action extravaganza for the next 112 minutes but liked me; you are going to go jaw-drop for the wrong reasons.

After a clumsy prologue which established the value of the famous Yuan Dynasty scroll Dwelling in the Fuchun Mountains, we are introduced to several characters namely our hero, Xiao Jinhan (Andy Lau), a secret agent who is married to an insurance project director Lin Yuyan (Zhang Jingchu) while the villains include the generic named Yamamoto (Tong Dawei), an ambiguous agent, Lisa (Lin Chiling), a weird underworld leader, Empress (Siqin Gaowa) and a bunch of Caucasian thugs. What is supposedly an easy-to-follow, good versus evil action thriller becomes a hot mess under the hands of Jay Sun.

Obviously, Sun has no idea how to shoot an intense action scene or at least keep you to the edge of your seat. He prefers to jump from one scene to another without much coherence throw in. Agent Xiao just propel from the ceiling all of a sudden. And why is Yamamoto so mesmerised by the painting? Oh we are supposed to believe Lisa is also carrying a torch for Agent Xiao. This is no music video mind you and it becomes increasingly frustrating to watch the characters as they spout their lines without much emotion and continuity. There’s so much on the screen but everything just seems jarringly off. To his credit, Sun did have an eye for visual; the production design is so rich and colourful, you are better off admiring the artistic touches instead of following the story.

This is an absolutely embarrassing gig for Andy Lau, just when you thought the charismatic idol finally has a chance to showcase his acting in productions liked A Simple Life and Detective Dee, Switch only makes him looks nothing more than a walking, fighting mannequin. Tong Dawei equally suffers as the tortured, psychotic villain with a laughingly bad white hairdo while Lin Chiling received the worst treatment of all, she ends up as a irritable moaning, seductive character.

Our palms turned sweaty when we watch Tom Cruise hanging off the skyscraper in Dubai though we never really feel a thing for Agent Xiao when he fight off a few thugs and crashed his car in the grand Atlantis in Dubai as well. Sun tries to imitate even to a certain extent engaging Hollywood stunt choreographer and 3D experts for this movie (The 3D version is not shown here). Everything that worked in the Cruise vehicle fails in epic proportions for Switch however. It never picks up from the get-go and simply sputters all the way to the credits.

(Switch to another flick and avoid this empty spectacle) 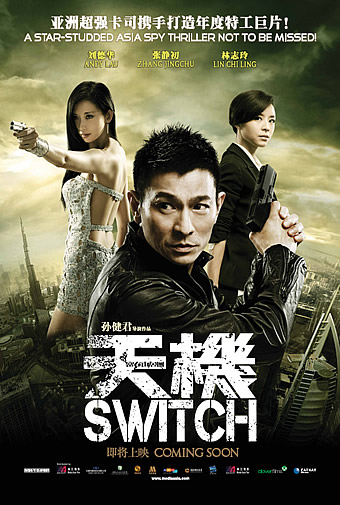 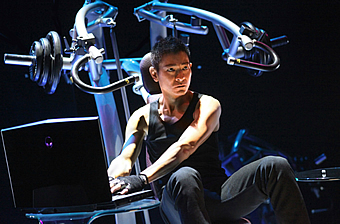