Synopsis: A 400-year old national treasure painting will be exhibited for the first time in Taipei.

Jay, the hot-shot security officer in charge of the painting's safety, is busy preparing for the event, when his life is turned upside down by a bumbling tourist from Beijing -- Ocean who is a security officer in his town. While visiting the museum, he becomes the only witness to the theft of the antique painting by Z, an International crime boss.

Jay forces Ocean to join him on the quest to retrieve the painting. While on the road, the two guys are constantly at each others' throats... However, the duo eventually learnt to put aside their differences and work together as a team...

Before Jackie Chan unveils what he has touted as his ‘last big action movie’, his son Jaycee Chan offers up this appetiser for audiences starved of the kind of ‘kungfu’ action-comedy the older Chan built his name on in the 1980s and 1990s. The similarities between Jaycee’s ‘Double Trouble’ and Jackie’s upcoming ‘Chinese Zodiac’ are uncanny- both have the respective lead star chasing after some ancient treasure stolen by baddies who have no respect for culture and every intention for wealth.

Whereas ‘Zodiac’ will have Jackie in pursuit of the 12 bronze heads of the Chinese zodiac, ‘Trouble’ has Jaycee playing a brash security guard going after a priceless 400-year-old painting about to be put on display at the National Museum. The target of an international art thief Z (Vivian Dawson) who sends his two incredibly beautiful minions (Jessica C and Shoko) to do the crime, the painting is in the melee misplaced in Mainland tourist Jane’s (Deng Jiajia) bag. Hence begins a chase around the touristy spots of Taiwan as Jay attempts to retrieve the painting before Z’s two henchmen- beg your pardon, henchwomen- do.

The plotting is as straightforward as it gets, so to enliven the proceedings, Jay gets a sidekick in the form of Mainland tourist Ocean (Xia Yu)- the latter also coincidentally a security guard in Beijing. When they first meet, the over-enthusiastic do-gooder Ocean mistakes Jay for a burglar and the ensuing confusion inadvertently causes Jay to lose the painting and Ocean to be separated from his tour group. As formula would dictate of such buddy comedies, Jay and Ocean will start off bickering non-stop, before finally embracing each other as partners.

If you’re expecting the likes of ‘Rush Hour’, well our advice is to lower your expectations drastically- while Jaycee and Xia Yu are both likeable in their own roles and alongside each other, neither their banter nor bicker is more than mildly amusing. The problem is twofold- first, the script by Zhang Hongyi and Yeh Sho-Heng generally lacks a sense of humour; and second, the supposedly mismatched pair of guards are just too genial to be engaging. The supporting acts are unfortunately little help- Chen Han-Dian’s high-strung local tour guide Idol is too strained to be amusing, while Chang Fei’s local gangster type Wu is too nondescript.

As lacklustre as the comedy is the action, which only serves to remind us the kind of action star Jaycee Chan is not. Granted that this is his first true-blue action movie, but Jaycee has a long long way to go if he aspires to walk in the footsteps of his father. For starters, the wirework is just too obvious, and his moves too mechanical to come off as anything more than rehearsed. Of course, none of his opponents are martial arts exponents in their own right, which renders their sparring amateurish.

Making his feature film debut, director David Hsun-Wei Chang shows little flair at big-scale action setpieces. The first, featured prominently in the trailer, has Jay and Ocean fending off V (Jessica C) and M (Shoko) atop a moving bus- but aside from being just run-of-the mill, the use of green screen in some shots is all too apparent. Ditto the film’s final fight between Z and Jay, which is too conveniently over by the time Ocean decides to give Jay a hand just so the script can prove its point at teamwork. Most inexcusable however is Chang’s decision to set one of the fights in a dark shipping container, making the action just impossible to make out.

Whether as an action movie, or as a comedy, or both, ‘Double Trouble’ falls short in both respects. Even its none-too-subtle subtext of warmer ties between China and Taiwan falls flat, coming across as little more than propaganda inserted by Mainland investors of this cross-strait production. And as appetiser for what we hope is Jackie Chan’s grand finale to his illustrious career in action moviemaking, it is merely passable, leaving one lamenting how Jaycee is but a pale shadow of his father’s former self. 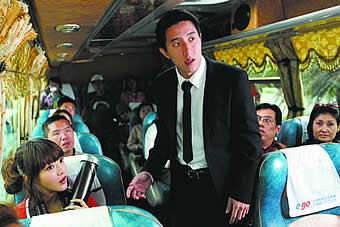 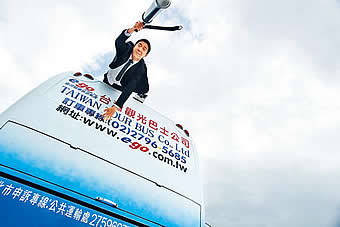 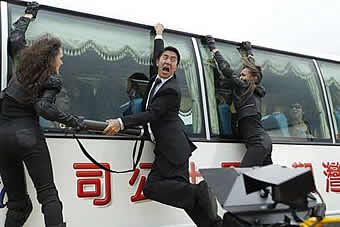